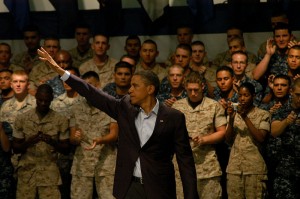 Barack Obama actually plans to do it.  He actually plans to neuter America by unilaterally dismantling most of the U.S. strategic nuclear arsenal.  In fact, Barack Obama says that the United States has a “moral obligation” to disarm as we lead the way to “a world without nuclear weapons”.  Sadly, a “world without nuclear weapons” is a fantasy that will not be possible any time soon.  Nuclear weapons technology is getting into more hands with each passing year, and geopolitical tensions are rising all over the globe.  If the United States did not have nuclear weapons, anyone with just a handful of nukes would constitute a massive threat to our national security.  An overwhelming strategic nuclear arsenal helps keep us safe because every other nation on the planet knows that it would be national suicide to attack us.  If you take that overwhelming strategic nuclear arsenal away, the entire calculation changes.

Many out there claim that even if the U.S. only has a few hundred nuclear warheads that it will be more than enough to be an effective deterrent.

Sadly, that simply is not true.

If an enemy knows that we only have a few hundred warheads, and if they know exactly where those warheads are located for verification purposes, then a first strike which would take out the vast majority of our operational warheads becomes very plausible.

That is why what Obama wants to do is so incredibly dangerous.  If he reduces our strategic nuclear arsenal down to almost nothing, the odds of a nuclear first strike against the United States someday go up dramatically.

The following is what Fox News reported that Obama said during a speech in South Korea the other day….

“American leadership has been essential to progress in a second area — taking concrete steps towards a world without nuclear weapons,” Obama said yesterday during a speech in Korea. “I believe the United States has a unique responsibility to act — indeed, we have a moral obligation.”

A moral obligation to do what?

A moral obligation to neuter America?

Obama also said the following in South Korea during his speech the other day….

“Even as we have more work to do, we can already say with confidence that we have more nuclear weapons than we need.”

Is that really the case?

The START Treaty that was agreed to back in 2010 will limit both the United States and Russia to a maximum of 1,550 deployed strategic nuclear warheads.  That represents a massive reduction from the height of the Cold War.

Unfortunately, that is not nearly good enough for Barack Obama.

Obama has instructed Pentagon leaders to draft a plan which would unilaterally reduce the number of strategic nuclear warheads in the U.S. arsenal by up to 80 percent.

The U.S. military may soon cut down to a level of only 300 warheads without requiring the Russians to make any additional cuts.

This is complete and utter madness!

Sadly, we do not appear to have sane people running things at this point.

In addition, the START Treaty did absolutely nothing to address the overwhelming superiority that Russia has in tactical nuclear weapons.  Today, Russia has at least a 10 to 1 numerical advantage over us in tactical nukes.

By shifting the balance of power so dramatically, Barack Obama is making a nuclear attack on the United States someday far more likely.

And we have no idea how many nukes the Chinese have.  They could have thousands.  We have no nuclear weapons treaty with them and so they can build as many nukes as they want.

How in the world can we be so foolish?

But Obama doesn’t just want to strip us of our nukes.

He also appears very willing to negotiate away our missile defenses.

On Monday, an exchange between Barack Obama and Russian President Dmitri Medvedev was caught by a microphone that was accidentally on.

The following is what was said during the exchange as recorded by ABC News….

President Obama: On all these issues, but particularly missile defense, this, this can be solved but it’s important for him to give me space.

President Medvedev: Yeah, I understand. I understand your message about space. Space for you…

President Obama: This is my last election. After my election I have more flexibility.

President Medvedev: I understand. I will transmit this information to Vladimir.

Video of this exchange is posted below….

So essentially Obama is saying that he will be willing to negotiate away our missile defenses after the 2012 election when he won’t be accountable to the American people any longer.

You are about to be neutered.

Meanwhile, Russia and China are taking an approach that is 180 degrees in the other direction.

Russia has already been spending big money modernizing and updating the Russian military.

And now Vladimir Putin wants to take things to a whole new level.  During the speech he made to formally launch his campaign to reclaim the Russian presidency, Vladimir Putin made the following statement….

We are also seeing nations in Asia really ramp up military spending.  The following comes from a recent article posted on Business Insider….

Military analysts at IHS Jane’s say that South-East Asian countries together increased defence spending by 13.5% last year, to $24.5 billion. The figure is projected to rise to $40 billion by 2016. According to SIPRI, arms deliveries to Malaysia jumped eightfold in 2005-09, compared with the previous five years. Indonesia’s spending grew by 84% in that period.

It is part of a wider Asian phenomenon. For the first time, in modern history at least, Asia’s military spending is poised to overtake Europe’s, according to the International Institute for Strategic Studies, a think-tank in London. China is doubling its defence budget every five years and India has just announced a 17% rise in spending this year, to about $40 billion.

Both the Russians and the Chinese have much larger conventional military forces than we do.  It has been our overwhelming advantage in strategic weaponry that has tilted the balance of power in our favor.  But now Barack Obama wants to totally neuter us.  A well-timed first strike at some point in the future could leave us as sitting ducks.

Most Americans don’t ever think such a scenario could possibly happen.

Unfortunately, most Americans are dead wrong.

Right now, gun sales in the United States are absolutely skyrocketing.  Someday those guns may be needed, but not for the reasons that most people think.

If we only have a handful of nukes, a limited first strike that takes out our nuclear weapons, our air bases, our naval bases, our electrical grid and our command and control capabilities could leave the United States wide open for a “Red Dawn” scenario.

The war and the starvation that would follow would result in the vast majority of Americans ending up dead.

Sadly, most people that will read this article will not understand it.

Most people that will read this article will choose to believe that a nuclear attack on America is absolutely impossible. 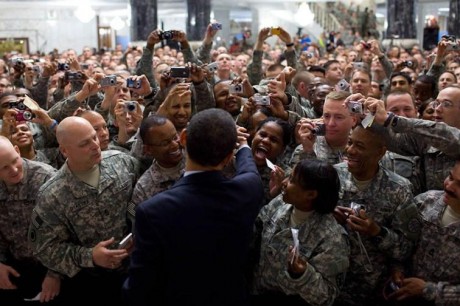