Did you know that the UN has a plan for running the world and it is right out in the open?  It is called “sustainable development”, but it is far more comprehensive than it sounds.  The truth is that the UN plan for running the world would dramatically alter nearly all forms of human activity.  A 204 page report on “sustainable development” entitled “Working Towards a Balanced and Inclusive Green Economy, A United Nations System-Wide Perspective” has been published in advance of the upcoming Rio + 20 United Nations Conference on Sustainable Development in Rio de Janeiro.  You can read the full report right here.  It envisions a vast system of global carbon taxes, massive global safety nets and the implementation of a one world green economy.  Many of those that are pushing “sustainable development” on a global level believe that they are doing it for the good of the planet.  In fact, the 204 page report mentioned above even says that the transition “to a green economy requires a fundamental shift in the way we think and act” but that it will be worth it in the end.  What people need to understand is that throughout modern history tyranny has almost always been initially introduced by people that believed that they had “good intentions”.  No matter how much friendly language the UN uses in their reports, the truth is that what they are promoting is an insidious agenda of absolute tyranny on a global scale.

The upcoming Rio + 20 United Nations Conference on Sustainable Development in Rio de Janeiro comes 20 years after the original 1992 UN Earth Summit that adopted “Agenda 21“.  This new summit will be about renewing that commitment to “sustainable development” and moving that agenda forward.

A lot of people out there will not be alarmed by any of this because they know that the UN does not have the power to impose any of their goals on them right now.  But that is not the game that the UN is playing.

The UN is not playing a short-term political game.  The UN is ready to play their game for decades if necessary.  They will just keep coming back with conference after conference and treaty after treaty until they get what they want.

At the moment, the United Nations is operating as something of a “soft global government”.  The UN does not have the power to coerce nations to do their bidding yet, so they rely mostly on cooperation.  The UN will “take what they can get” right now, and they know that someday they will eventually have the power to turn their recommendations into mandates.

One of the things that the UN would love to implement is a global carbon tax scheme.  The power to tax is the power to control, and if the UN is ever given the power to tax the entire globe they will at that point become much more than a “soft global government”.

Right now, the UN is proposing a global carbon tax scheme that would come to as much as 0.6 percent of GDP for participating nations.  The following comes directly from the report….

If, for example, industrialized countries were to use carbon taxes or auctioned emissions permits to reach the GHG emission targets they pledged in the Cancun Agreements, they could raise as much as 0.6 per cent of their GDP or about US $250 billion in revenues per year by 2020 (OECD 2012). In addition, other forms of carbon finance, PES, green stimulus funds, micro-finance, social responsibility investment funds, green bonds and other local financial innovations have emerged in recent years and can open up the space for large-scale green financing. To further scale up the financing for a green economy, public-private innovative financing mechanisms are needed to tap institutional investors’ capital.

The report also envisions the transfer of trillions of dollars a year from wealthy countries to poorer countries.  The UN feels that this is necessary for a couple of reasons.

First of all, the UN says that developing nations do not have the resources to pay for the “green infrastructure” that is needed to participate in the new green economy and therefore wealthier nations should pay for it.

Secondly, the UN believes that massive global wealth distribution is needed in order to bring about global “equity”.

The UN report also speaks of a “social protection floor”.  So now instead of just supporting tens of millions of Americans that are relying on “the safety net”, U.S. taxpayers will also be expected to contribute to a global safety net that hundreds of millions of people could end up relying on.

The UN also envisions a one world “green economy” where “freer trade” is accompanied by environmental responsibility.  The following comes from the UN report mentioned above….

Freer trade should be tied to important human values, welfare goals and inclusive growth, assisting those developing countries that are marginalized in the global trading system. Trade policy also needs to be accompanied by policies in both the social and environmental spheres.

In this one world “green economy”, prices for things like food and energy will go up dramatically for Americans.  The UN is pushing a concept known as “full-cost pricing”.  What that means is that the “full social and environmental costs” of producing goods and services must be passed on to you so that you will be “motivated” to change your behavior.  The following is another excerpt from the UN report….

Full-cost pricing, which includes full social and environmental costs, is an essential tool for changing investments as well as consumption and production patterns and for motivating innovations.

For example, the UN really does not like that Americans drive their cars so much.  They believe that it is very bad for the environment.  So according to the UN it is going to be necessary to raise the price of gasoline dramatically.

The UN report also envisions massive changes to the global financial system.  This new UN report on “sustainable development” is just the latest in a long string of UN reports that sees an emerging role for “Special Drawing Rights” to play in the international financial system….

Efforts need to be made to explore the potential for an innovative use of Special Drawing Rights, other international reserve assets and pools of concentrated assets to serve the aim of financing green economy investments with attractive social as well as private returns and increasing the provision of global public goods.

The United Nations also wants to change the way that you eat.  This new UN report says that we all need to transition to “sustainable diets”.  For one thing, that would mean a lot less meat for you and your family.

Do you want “climate change education” to be pounded into the heads of your kids when they go to school?

If not, you better start paying attention to what the UN is trying to do.

Also, the new UN report speaks of the need for “universal access to reproductive health care and family planning”.  In other words, the United Nations wants to make sure that there is an abortion clinic in every corner of the globe.

As I have written about so many times before, the elitists that are pushing “sustainable development” on a global scale love death.  They believe that humans are the primary cause of global warming, and they also believe that if there were a lot less humans running around that there would be a lot less climate change.

Sadly, there are a whole lot of people out there these days that are advocating very strict population control measures for the entire globe.  They believe that they are trying to “save the planet”, but the truth is that what they are really doing is promoting global tyranny.

Unfortunately, there are now millions upon millions of “true believers” in this “sustainable development” agenda and it is being taught in almost every major college and university in the developed world.

The United Nations is going to keep coming back again and again with this agenda.  They will advance it an inch at a time if they have to.  The elitists that are promoting this will not get tired and they will not give up.

In fact, UN officials have even been drafting an environmental constitution for the world that is intended to eventually supersede all existing national laws.

The working title of this document is “Draft International Covenant on Environment and Development” and you can read the entire thing right here.

Most people out there have absolutely no idea how serious the United Nations is about all of this.  The United Nations truly believes that it should be running the world and ushering humanity into a new era of peace, equality and “green prosperity”.

The environment is going to be used as an excuse over and over to further strengthen global institutions such as the United Nations.

If the American people are not really careful, one day our children will wake up in a world where soldiers in blue helmets are standing on our street corners.

It is not here yet, but it is coming.

You better stand up and be heard while you still can. 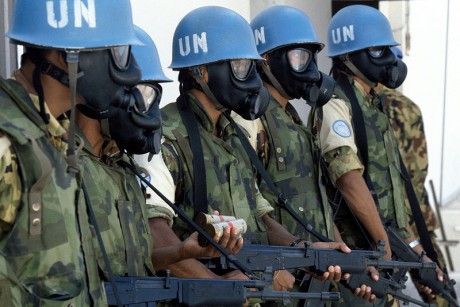