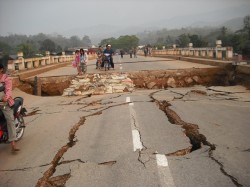 The Virginia earthquake is already being called a “once a century” earthquake for the east coast. The earthquake was felt from Georgia all the way up to Ottawa, Canada.  It was felt as far west as Cleveland, Ohio.  It prompted the evacuation of congressional buildings and the Pentagon.  The earthquake actually cracked the Washington Monument and now it is closed indefinitely for repairs.

But that was not the only major seismic event in the U.S. that day.  A magnitude-5.3 earthquake rattled the area along the Colorado/New Mexico border.  That was the largest earthquake that region had seen in more than 40 years.

If these were isolated incidents, that would be one thing.  Unfortunately, major earthquakes are popping up all over the globe with alarming frequency.  In fact, a magnitude-7.0 earthquake just struck northern Peru.

But just because we have had some notable earthquakes this year does not mean that earthquakes are increasing in frequency.

What do the hard numbers tell us?

Well, when you take a look at the numbers it quickly becomes clear that the number of earthquakes is increasing.

Back in 2001, the world had 1361 earthquakes of magnitude-5.0 or greater.  This year, we are on pace to have over 2800.  In fact, the number of major earthquakes this year is going to be the highest number we have seen during this past decade by far.

So how do the “experts” explain this away?

The following is what the USGS has to say about why it seems that the number of earthquakes is increasing….

We continue to be asked by many people throughout the world if earthquakes are on the increase. Although it may seem that we are having more earthquakes, earthquakes of magnitude 7.0 or greater have remained fairly constant.

Are you buying that?

Yes, technology may enable us to detect more earthquakes than we did 50 or 100 years ago, but there has not been a quantum leap in earthquake detection technology during this past decade.

But what we have seen during this past decade is a definite rise in the number of major earthquakes.

The following chart of earthquakes magnitude-5.0 or greater over the last decade comes to us from americandailyherald.com…. 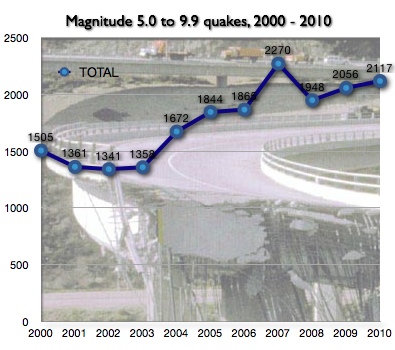 Please keep in mind that this year (2011) we are on pace to have more than 2800 earthquakes of magnitude-5.0 or greater.  Once that number is included, the chart will look even more dramatic.

So after viewing these charts, how can anyone still deny that the number of major earthquakes is increasing?

But that is exactly what all of the “experts” on the mainstream news are going to keep on doing.

In the end, do your own research and find out for yourself.  Don’t let the television do your thinking for you.

The reality is that we live in very unstable times.  Unfortunately, the increase in the number of earthquakes appears to be part of a larger trend.  So far in 2011, natural disasters of all types seem to be increasing in frequency.

We all remember what happened earlier this year in Japan.  That was an event that was absolutely unprecedented in modern Japanese history.

But we have also seen a lot of other weird geological events around the globe so far this year.

For example, a few weeks ago a series of earthquakes caused an entire river to disappear in Costa Rica.

In addition, gigantic cracks and massive sinkholes have been appearing all over the earth.  Nobody is quite sure why this is happening.

There are all sorts of theories about why the planet seems to be becoming more unstable, but you don’t have to be a rocket scientist to figure out that this is not a good trend and that we should all be preparing for the worst.

In the United States, there is quite a bit of evidence that the New Madrid fault is starting to come to life.  If you live in the middle part of the country, you should really get educated about the history of the New Madrid fault and about what a major earthquake in that area could mean for you.

So the next time an “expert” appears on television assuring you that earthquakes are not becoming more frequent and that you don’t have anything to be concerned about, don’t be so quick to believe that person.

The cold, hard reality of the matter is that the number of earthquakes is increasing and our planet is becoming increasingly unstable.

Yes, it is a bit frightening, but wouldn’t you rather know the truth?