Wouldn’t it be great if a Republican presidential candidate could just buy the support of just about every major conservative talk show host in America?  Well, it may not be as far-fetched as you may think.  Clear Channel owns more radio stations (850) than anyone else in the United States.  They also own Premiere Radio Networks, the company that syndicates the radio shows of Rush Limbaugh, Sean Hannity, and Glenn Beck, among others.  Needless to say, Clear Channel basically owns conservative talk radio in the United States.  So who owns Clear Channel?  Well, it turns out that Bain Capital is one of the primary owners of Clear Channel.  Yes, you read that correctly.  The company that Mitt Romney ran for so long is one of the “big bosses” over virtually all conservative talk radio in America.  Of course Mitt Romney is not running Bain Capital anymore.  He is a “retired partner”, but he still has a huge financial stake in Bain Capital.  We’re talking about millions upon millions of dollars.  If you doubt this, just check out page 34 of this public financial disclosure report.  So if you have been wondering why so many conservative talk show hosts are being so incredibly kind to Mitt Romney, this just might be the answer.

In the media world, there is a clear understanding that you simply do not bite the hand that feeds you.  Some of the most prominent conservative talk radio hosts are earning tens of millions of dollars a year.

If you were making tens of millions of dollars a year, wouldn’t you be very careful to avoid offending your boss?

The deal in which Bain Capital became one of the owners of Clear Channel was initiated just a short time before Mitt Romney’s first run for president.  The following comes from Wikipedia….

On November 16, 2006, Clear Channel announced plans to go private, being bought out by two private-equity firms, Thomas H. Lee Partners and Bain Capital Partners for $18.7 billion, which is just under a 10 percent premium above its closing price of $35.36 a share on November 16 (the deal values Clear Channel at $37.60 per share).

The deal was finalized in 2008.  Today, Bain Capital is still one of the primary owners of Clear Channel.

One of the subsidiaries of Clear Channel is Premiere Radio Networks.

The power that Premiere Radio Networks has is absolutely staggering.  The following is directly from the official Clear Channel website….

So do you think that any of those hosts is going to risk viciously attacking Mitt Romney and Bain Capital during this election season?

One of the controversies that has plagued Premiere Radio Networks in recent years has been the uproar over their use of paid actors to call in to their radio shows.

Clear Channel, through its subsidiary, Premiere Radio Networks, auditions and hires actors to call in to talk radio shows and pose as listeners in order to provide shows, carried by Clear Channel and other broadcasters, with planned content in the form of stories and opinions. The custom caller service provided by Premiere Radio ensures its clients they won’t hear the same actor’s voice for at least two months in order to appear authentic to listeners who might otherwise catch on.

So perhaps that explains where some of the “Romney callers” come from.

There is nothing illegal about what Romney and Bain Capital have done, but it sure does not pass the “smell test”.

And yes, Mitt Romney is still bringing in lots of money from Bain Capital.  The following comes from a Wikipedia article about Mitt Romney….

At the time of his departure, Romney negotiated an agreement with Bain Capital that allowed him to receive a passive profit share as a retired partner in some Bain Capital entities, including buyout and investment funds.[62][57] With the private equity business continuing to thrive, this deal would bring him millions of dollars in income each year.[57] As a result of his business career, by 2007 Romney and his wife had a net worth of between $190 and $250 million, most of it held in blind trusts.[62] An additional blind trust existed in the name of the Romneys’ children and grandchildren that was valued at between $70 and $100 million as of 2007.[63] The couple’s net worth remained in the same range as of 2011, and was still held in blind trusts.

Just check out the following list of the biggest donors to the Romney campaign.  These numbers come from opensecrets.org….

As with anything, whenever you want to get to the real truth you just need to follow the money.

Earlier this week, Sean Hannity told Rick Perry that his attacks on Mitt Romney’s time at Bain Capital sounded like something that “Occupy Wall Street” would say.

“There’s no way you can try to dress that up,” Limbaugh fumed. “I don’t understand it. Well, politically I understand it, but that’s just absurd. It’s sad. ‘Cause I really, really, really like Rick Perry! I really do. I had such hopes! I did. I’ll tell you, I did, but all of this talk about “corporate raiders,” and as I listen to politicians start talking about capitalism, lights are going off in my head. “Maybe they don’t really know what it is. Maybe they’re under some misconception about what capitalism is, because this characterization of it? A distinction with venture capitalism and vulture capitalism? This bite from Perry doesn’t compute.”

Michael Savage has been one of the worst offenders of all.  He made national headlines when he offered Newt Gingrich one millions dollars to drop out of the race so that Mitt Romney would have a clear path to the nomination.

When he announced this offer, Savage wrote the following on his own website….

“Mitt Romney is the only candidate with a chance of defeating Barack Obama, and there is nothing more important than that for future health, safety, and security of the United States of America”

So why are these conservative talk show hosts defending Mitt Romney so furiously?

I think now we know.

It is all about the money.

When you have enough money, you can get conservative talk show hosts to promote an extremely liberal candidate.

Yes, of course Bain Capital does not “control” what these talk show hosts say.

Yes, of course some of the talk show hosts toss some light criticism at Romney from time to time.

But they simply do not go after Romney like they should be.

The truth is that Mitt Romney is really a Democrat that is masquerading as a Republican.  When you closely examine his record, he is very similar to Obama.

There is no way in the world that any self-respecting conservative should ever cast a single vote for him.

But right now Mitt Romney is running away with the race for the Republican nomination.

If Republicans can be fooled this badly, is there any hope for the future of the Republican Party? 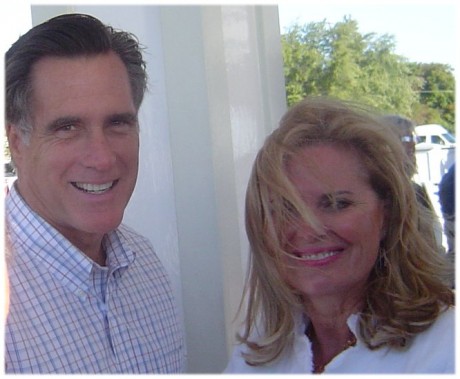