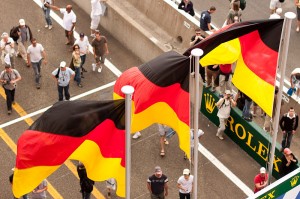 It has now become very clear who dominates Europe.  As European officials prepare to gather for one of the most important summits in EU history, it has become apparent that either the German plan for a new EU treaty is going to be adopted or there is not going to be a deal at all.  Germany wants to impose strict new fiscal restraints on all of the eurozone nations.  This would include a new 3 percent budget deficit rule with automatic sanctions on any violators.  The European Court of Justice would be given power to decide whether or not an individual nation was complying with the 3 percent rule or not.  A highly controversial new tax on all financial transactions is also being proposed, along with a number of other repressive new regulations that are designed to more tightly integrate Europe.  Germany says that if all 27 EU nations are not willing to go along with a new treaty then it is prepared to strike an agreement with just the 17 nations that make up the eurozone.  But not everyone is thrilled with what Germany is trying to do.  Critics are saying that the German proposals (which are also being backed by the French) would mean a massive loss of sovereignty for most of the nations that make up the eurozone, and they would essentially turn the eurozone into “the United States of Germany”.

The funny thing is that the German proposals to “fix” Europe involve very little sacrifice from Germany itself.  Germany would not be contributing any additional money to bail out the rest of Europe and Germany continues to completely rule out the creation of “eurobonds” which would help spread the risk of default across the entire eurozone.

Sadly, even if the German plan is adopted and all the nations in the eurozone agree to it, the financial crisis in Europe will still not be fixed.

There is still way too much government debt in Europe, and the new treaty would not reduce those debt levels.  Instead, it would only slow the growth of future debt.

In addition, there are dozens of major banks in Europe that are already failing.  The new treaty would do next to nothing to restore the European banking system to health.

This is the approach that Germany has prescribed for Europe.  The Germans believe that those that have gotten into too much debt must pay.

In fact, a newspaper in Germany recently ran an article with this startling headline: “Merkel and Sarkozy want automatic Punishment for Debtsinners“.

Germany has become the dominant force in Europe, and Angela Merkel has emerged as the de facto leader of Europe.  This reality was noted in a recent New York Times article….

The treaty changes she and President Nicolas Sarkozy of France proposed in Paris on Monday would have been inconceivable at the beginning of the crisis, since it requires states to cede a significant degree of economic sovereignty. It is a process that many observers, in particular the populist British press, say is well underway. German dominance of the euro zone, they say — with Mrs. Merkel as the unofficial but unchallenged leader of Europe — has in fact already arrived.

Instead of a new treaty among the 27 members of the European Union, a French official suggested a more likely outcome will be an accord by the 17 nations that use the euro. And a German official said reaching a deal might take until Christmas.

The summit, which begins Thursday night, has been described as do-or-die for the eurozone countries, whose economies are being dragged down by crippling debts among some of the countries.

A whole lot is riding on this summit.  Standard & Poor’s has announced that it has placed 15 members of the eurozone on review for a possible credit downgrade.

The pressure is on.  If a new agreement is not reached soon, everyone in the eurozone could soon be hit with a downgrade and bond yields could start spiking again.

The reasons why Standard & Poor’s is considering downgrading all the members of the eurozone were detailed in a recent CNN article….

The agency sees five factors behind the current debt crisis: Tightening credit conditions, rising yields on bonds issued by top rated sovereigns, ongoing political deadlock over how to deal with the crisis, high levels of government and household debt, and the rising risk that Europe will suffer an economic recession next year.

It is imperative that the Europeans come up with something by the end of the weekend.  Nick Kounis, the head of macro research at ABN AMRO, was quoted as saying the following in a recent CNBC article about what would happen if there is no agreement….

“Because without one, we’ll be left with a complete and utter economic catastrophe”

David Murrin, the chief investment officer at Emergent Asset Management, is even less optimistic.  He recently told CNBC the following….

“Europe is in a terminal phase of its life. There is no way I can see a glomeration being a successful way of smaller entities into bigger entities without growth. There will be fractures. (There is) no way Europe is ever going to hold it together”

There is a big difference between Europe and the United States.  In the U.S., when the federal government decides to do something that is pretty much the end of the matter.

In Europe, getting all 27 members of the EU (or even all 17 members of the eurozone) to agree on something can be really messy.  There are a whole host of national laws, national legislatures and national courts that have to be satisfied.  A single vote or a single court case can hold the process up for months or even years.

The truth is that a treaty change will likely take years to get fully implemented as an article in the Daily Mail by Andrew Alexander recently noted….

We have been here before. German sources talk of a new EU or eurozone treaty being worked out by Easter. This is a joke, rather heavy, too, like most Teutonic humour.

Getting 27 governments to agree on the time of day is hard enough.

Getting them to agree a treaty that would undermine the right of governments to decide their own taxing and spending powers, if it is even possible, will take a very long time and unusually pliant politicians.

In the course of that, moreover, some governments will need to go through the tediously democratic process of public consultations and referendums, perhaps obliged to by their own laws — tiresome leftovers from the time when the EU was thought to need popular consent.

So, we are not talking here of months but years.

The president of the European Council, Herman Van Rompuy, has proposed a more limited agreement that would not involve a new treaty.  Instead, existing rules would be altered in such a way as to encourage members of the eurozone to be more fiscally responsible.

But German officials are dismissing this proposal as a “typical Brussels box of tricks” and they do not plan to even consider it.

At this point in the game, it is either going to be the “German way” or the highway for the eurozone.

So will we actually see a new treaty?

Well, that is a very good question.  The reality is that “euroskepticism” is growing all across the eurozone.  In fact, according to one new poll 60 percent of Germans do not even think that the euro is a good idea.  If a new treaty tries to get pushed through, there is going to be opposition to it in many parts of Europe.

Right now, Greece is experiencing a full-blown depression and the financial system of that nation is utterly collapsing.  According to a recent Der Spiegel article, the run on Greek banks is rapidly accelerating….

He means that the outflow of funds from Greek bank accounts has been accelerating rapidly. At the start of 2010, savings and time deposits held by private households in Greece totalled €237.7 billion — by the end of 2011, they had fallen by €49 billion. Since then, the decline has been gaining momentum. Savings fell by a further €5.4 billion in September and by an estimated €8.5 billion in October — the biggest monthly outflow of funds since the start of the debt crisis in late 2009.

Other European nations are implementing some really draconian measures in an attempt to raise more taxes.  For example, in Italy all cash transactions over 1000 euros have been permanently banned.

Hearing that should alarm all of us, because it is yet another move toward a cashless society.

Europe is falling apart, and whether there is a new treaty or not the financial carnage is going to continue.  But every time things get worse, the European elite use it as an opportunity to push a “United States of Europe” as the grand solution.  If you want to really understand what is happening in Europe right now, just check out this video of a recent speech by Nigel Farage on the floor of the European Parliament.  Trust me, it is a video that you will want to watch a couple of times.

Europe has become a very undemocratic place, and it is increasingly being dominated by Germany.  A Daily Mail article entitled “Rise of the Fourth Reich, how Germany is using the financial crisis to conquer Europe” contained the following sobering assessment of what deeper economic integration for Europe would really mean….

Dark days are ahead for Europe, and the coming financial problems are going to affect the entire globe.