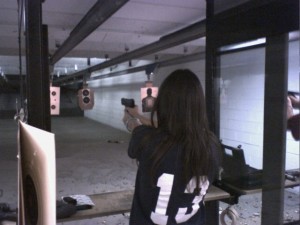 In Garden Grove, California the other day, a 65 year old woman with a gun chased 5 armed criminals out of her jewelry store.  The video of this amazing incident (posted below) is quite funny, but it also demonstrates a very serious point.  The streets of many of our largest cities are slowly but surely being transformed into a living hell as our society rots from the inside out.  The criminals are always going to have plenty of guns.  If we have no way to defend ourselves, then many of us will be at the mercy of the criminals.  For example, imagine what would have happened if those 5 armed robbers had invaded her home at night?  Without a gun, what could that 65 year old woman have done?  The best she could hope for is that the criminals would take whatever they wanted and would not do any violence to her or to her family.  Of course the police would show up later and “take a report”, but the police would not be able to undo any of the damage that the crooks had already done.  This is especially true when it comes to violence against women.  You can always replace your possessions, but you can never undo a sexual assault or a rape.  America is being absolutely overrun by psychos these days, and if you don’t have a gun how in the world are you going to keep a pack of criminals from having their way with you or with members of your family?  I realize that is a very disturbing thing to think about, but these are dark times that we are living in.  As society continues to fall apart we are going to see home invasions because more twisted and more horrifying than ever before.

Without a gun, the 65 year old woman in the video below and her employees would have been at the mercy of whatever the criminals wanted to do.

Hopefully the criminals would have just grabbed a bunch of jewelry and left the store, but you never know.

The following is a description of this incident from the Los Angeles Times….

The attempted heist occurred Sunday at Continental Jewelry in the 12000 block of Brookhurst Street. Surveillance footage from the store shows a white SUV backing up to the front of the building and five men getting out, pillowcases in hand.

The men rush to the front of the counter and point handguns at the clerks and a customer. Seconds later the shots are fired and the men race back to the door, fighting to get out as the woman runs after them.

Video of this elderly woman shooting at these thieves and chasing them out of her store is posted below….

Sadly, in the wake of the recent shootings in Aurora, Colorado there is all kinds of talk in the mainstream media about the need to ban guns.

But the truth is that crime always seems to go up in U.S. cities where guns are banned.

Strict gun laws were supposed to greatly reduce crime in Chicago, but today Chicago is being called “the deadliest global city“.

If you look outside of the United States you see similar results.

A recent article by Mac Slavo of shtfplan.com contained some statistics about how crime has risen in Australia since guns were banned….

Armed Robberies are UP 69%

Assaults Involving Guns are UP 28%

Well, what about areas where gun ownership has been allowed to flourish?

The following is from a recent article by my friend J. Vanne in which he detailed how guns have helped to reduce crime in many areas of the United States….

The criminals are always going to be able to get guns.

But if criminals know that they are likely to get shot if they commit a crime, then that is going to make them a lot more hesitant to do so.

Our founding fathers felt very strongly about gun ownership for some very fundamental reasons that Ben Swann detailed in a recent “Reality Check” segment about the Second Amendment….