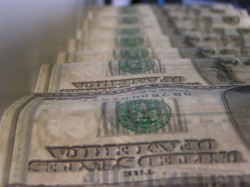 For decades, the U.S. economy was so dominant compared to the rest of the world that nobody really even challenged the status of the U.S. dollar as the reserve currency of the world.  But now that U.S. government debt has been downgraded, the U.S. dollar is showing significant weakness and the U.S. economy continues to crumble, the rest of the world is questioning whether the U.S. dollar should be allowed to continue to have such a privileged position in the global marketplace.  Politicians all over the world are now openly calling for a new global currency to replace the U.S. dollar in international trade.  In fact, we are already seeing a shift away from the dollar in many areas of the globe.  A decade ago, the U.S. dollar made up approximately 70% of all foreign exchange reserves around the world.  Today, that figure is down to about 60%, and it continues to fall.  As the debt problems of the U.S. government get even deeper, and as the U.S. dollar loses even more strength, the calls for a truly global currency are going to grow even louder.

Right now, the global financial system is still based on the U.S. dollar to a very large degree.  But dissatisfaction with the status quo is growing around the world.  Many are blaming the United States for the massive financial problems that we have had in recent years.

Many global politicians these days seem quite eager to jump on any chance to criticize the U.S. financial system.  In particular, the recent downgrade of long-term U.S. government debt by S&P has provided plenty of ammunition for international proponents of a new global currency.

The largest bank in Saudi Arabia, National Commercial Bank, recently had the following to say about the U.S. dollar….

“The size of the US economy and its treasury market and the dollar’s status as a reserve currency make it impossible to find a historical parallel for the current situation. However, being the world’s reserve currency, the US dollar now appears inconsistent with an AA+ rating.”

China’s official Xinhua news agency has been brutally attacking the U.S. financial system in recent days.  The following is one example….

“The only way the Americans have come up with to improve economic growth has been to take on new loans to repay the old ones.”

In fact, Xinhua has even gone so far to suggest that U.S. monetary policy should be under “international supervision” and that a new global reserve currency should be created….

“International supervision over the issue of U.S. dollars should be introduced and a new, stable and secured global reserve currency may also be an option to avert a catastrophe caused by any single country.”

The Russian government has also been a vocal proponent of a shift away from the U.S. dollar.  At a G8 summit back in 2009, Russian President Dmitry Medvedev openly spoke of the need for a new global currency and he even showed reporters a coin that represented what a “united future world currency” could potentially look like.

But it is not just individual nations that have been calling for a change.  Over the last couple of years, the United Nations has repeatedly called for the U.S. dollar to be replaced as the global reserve currency.

For instance, a UN report entitled “The U.N. World Economic and Social Survey 2010” openly talked about how the transition from the U.S. dollar to a new global currency could be accomplished.  The report made very few headlines around the world, but Americans need to understand that the UN itself is openly plotting to dethrone the U.S. dollar.  The following is a brief excerpt from the report….

“A new global reserve system could be created, one that no longer relies on the United States dollar as the single major reserve currency”

The IMF has also been instrumental in promoting the idea of a new global currency.  In a recent report entitled “Enhancing International Monetary Stability—A Role for the SDR“, the IMF discussed the “problems” with having the U.S. dollar as the reserve currency of the world and it postulated that a larger role for SDRs (Special Drawing Rights) could potentially be an important step toward a true global currency.

In fact, the report described SDRs as “an embryo” from which a new global currency could ultimately develop.

While he was still head of the IMF, Dominique Strauss-Kahn openly called for the introduction of a global currency backed by a global central bank which would act as the “lender of last resort” in the event of a severe economic crisis….

Finally, in principle, a new global currency issued by a global central bank, with robust governance and institutional features, could provide a nominal anchor and risk-free asset for the system independent of national currencies. This global central bank could also serve as a lender of last resort.

But is that what we really need?

A global currency issued by a global central bank?

Such a system would not be accountable to American voters whatsoever.

Not that the Federal Reserve is accountable to us right now, but at least there is some hope of abolishing the Fed under the U.S. Constitution.

Under a global central banking system, the American people would have essentially no power over the monetary system and the international bankers would have almost all the power.

Of course that is what the international bankers have always wanted – complete control over the financial system of the entire world.

Sadly, it seems as though whenever financial problems arise these days, the solutions we are given always involves more centralization of financial power.

There seems to be a growing consensus among the ultra-wealthy and the global elite that a one world financial system is what we need.  But getting there will not be easy.  The U.S. dollar is not dead yet, and much of the rest of the world has grown accustomed to using it.

However, if the U.S. dollar were to “collapse”, that could create a crisis which would give the global elite the excuse they need to push us in the direction of a truly global currency.

Let’s hope that nothing like this happens any time soon.

Could you imagine living in a world in which you were unable to buy or sell unless you participated in the global currency system?

A global currency would be a really, really bad idea.  Hopefully we still have some more time before one gets rammed down our throats.