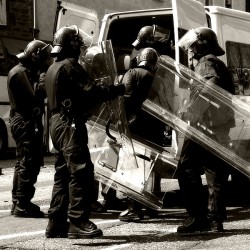 Are you ready for Big Brother 2.0?  If you think that the hundreds of ways that the government watches, monitors, tracks and controls us now are bad, just wait until you see what is coming.  We live in an age when paranoia is running wild.  As technology continues to develop at an exponential pace, governments all over the globe are going to discover a multitude of new ways to spy on us and control our behavior.  In a world where everyone is a “potential terrorist”, we are told that things like liberty, freedom and privacy are “luxuries” that we can no longer afford.  We are assured that if we just allow the government to watch all of us and investigate all of us that somehow that will keep us all safe.  But it isn’t just the government that is watching us.  Now we are being taught to spy on one another and to report any trace of “suspicious activity” to the government immediately.  The entire civilized world is being transformed into one giant prison grid, and many of the new technologies that are now being introduced are going to make things even worse.

The following are 10 new ways that the government will be spying on you and controlling your behavior….

#1 Are you ready for “electronic skin tattoos”?  One team of researchers has created an extremely thin, extremely flexible “smart skin” that will open up a whole new world of possibilities.  Wearing “skin-mounted electronics” might seem like a great idea to tech geeks, but it also could create a whole lot of new problems.  The following is how an article in one UK newspaper described this new breakthrough….

The “epidermal electronic system” relies on a highly flexible electrical circuit composed of snake-like conducting channels that can bend and stretch without affecting performance. The circuit is about the size of a postage stamp, is thinner than a human hair and sticks to the skin by natural electrostatic forces rather than glue.

Yes, this kind of technology would be a great way to connect wirelessly to the Internet and it would be helpful for doctors that need to monitor their patients, but the potential for abuse is also there.

Once this type of technology becomes widespread, governments will be able to monitor the location and activities of their citizens like never before.

In addition, this type of technology could one day become mandated by governments.  For example, someday you may be required to have an “electronic skin tatoo” in order to prove your identity or to participate in commerce.

Also, it is not too far of a stretch to imagine that “skin-mounted electronics” could be used to control large populations.  Just remember, if you connect yourself physically to the Internet, that also means that the Internet is connected to you.

#3 The U.S. military has developed an invisible “pain ray” that is remarkably effective.  The following is how a recent article posted on Alternet described this weapon….

It sounds like a weapon out of Star Wars. The Active Denial System, or ADS, works like an open-air microwave oven, projecting a focused beam of electromagnetic radiation to heat the skin of its targets to 130 degrees. This creates an intolerable burning sensation forcing those in its path to instinctively flee (a response the Air Force dubs the “goodbye effect“).

Sadly, this weapon is already being used in American prisons.  How long will it be before it is used on the general population?

#4 Be careful about what you put up on Facebook or Twitter.  Law enforcement agencies all over the globe are now focusing on social media as never before.  For example, the NYPD has just created a special “social media” unit dedicated to looking for criminals on Facebook and Twitter.

#5 Facial recognition technology has now come of age.  With the millions of security cameras that are going up all over the world, such technology is proving to be very useful for law enforcement authorities.  In fact, police in London are using it to track down people that were involved in the London riots.  The following is an excerpt from a recent CBC report that described these efforts….

Facial recognition technology being considered for London’s 2012 Games is getting a workout in the wake of Britain’s riots, with officers feeding photographs of suspects through Scotland Yard’s newly updated face-matching program.

Facial recognition technology is rapidly going to become part of our everyday lives.  In fact, now even Facebook is using it.  Eventually it is going to become very difficult to avoid the reach of this technology.

#6 “Smart meters” are going into homes all over North America and Europe.  These smart meters monitor your home every single minute of every single day and they transmit very sophisticated data about your personal behavior back to the utility company.

They are already being used by police all over the United States in drug cases.  If a smart meter catches you using an “unusual” amount of energy there is a good chance that your home will be raided.

The European Parliament has set a goal of having smart meters in the homes of 80 percent of all electricity consumers by the year 2020, and Barack Obama is working very hard to get them into as many American homes as he can.

#7 Our children are being trained to accept being under surveillance almost constantly.  For example, the U.S. Department of Agriculture is spending huge amounts of money to install surveillance cameras in the cafeterias of U.S. public schools so that government control freaks can closely monitor what our children are eating.

#8 Perhaps you thought that only Tom Cruise had to worry about “pre-crime”.  Well, now “pre-crime” is popping up in the real world too.  The Florida State Department of Juvenile Justice has announced that it will begin using analysis software to predict crime by young delinquents and will place “potential offenders” in specific prevention and education programs.

#9 According to the ACLU, state police in Michigan are now using “extraction devices” to download data from the cellphones of motorists that they pull over.  This is taking place even if those pulled over are not accused of doing anything wrong.

The following is how an article on CNET News described the capabilities of these “extraction devices”….

#10 LRAD sound cannons are already been used by law enforcement authorities to disperse large crowds inside the United States.  So how much “damage” can sound do?  Well, it turns out that sound can actually do a whole lot of damage.  The following is how Alternet describes these cruel weapons….

LRAD sound cannons do not discriminate.  When they are being used to disperse protesters, any innocent bystanders in the area will be affected as well.  If anyone gets too close to an LRAD sound cannon while it is in use, permanent damage can result.  Small children and the elderly are particularly vulnerable.  Sadly, the use of LRAD sound cannons is becoming more common.  In fact, they have even been used to break up college block parties.

So is this the kind of world that you want to live in?

Do you want your children and grandchildren to live in a world where liberty and freedom are all but forgotten?

This world is headed toward a very dark place.  These “Big Brother” technologies are going to become even more pervasive and even more oppressive.  If this trend is not stopped now, someday these technologies will get into some very evil hands, and then all hell will be unleashed.

So what do all of you think about these “Big Brother” technologies?  Please feel free to post a comment with your opinion below….