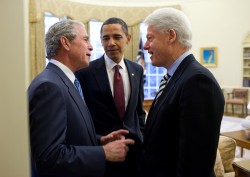 Have you ever noticed how almost all the mainstream news stories carried on the major news networks are slanted in a way that is intended to divide Americans?  The truth is that the “establishment” is constantly trying to divide us and get us fighting with one another.  They pit the Republicans against the Democrats (even as though control both sides).  They pit one race against another.  They pit one gender against another.  We are told that the rich are against the poor, the north is against the south, urban is against rural and that there are even “generational battles” going on.  Frustration and hate are rapidly growing in the United States today, and a lot of that frustration and hate is unfortunately aimed at the targets that the mainstream media has programmed all of us to hate.  Meanwhile, those at the top of the pyramid who are controlling the whole game love it when we are divided because we can never become united and challenge their control.

But the truth is that we are all Americans.  If this country goes down, it is going to take all of us down with it.  A house that is divided can never stand.

Unfortunately, America is more divided today than ever.  Many Democrats have an absolutely explosive hatred for the Republican Party.  Many Republicans can’t stop thinking about how much they hate Barack Obama and the Democrats.  Meanwhile, those that control both parties at the highest levels are loving it.

So just who is the “establishment”?

Well, they are headed by the ultra-wealthy international banking elite.  They fund the campaigns of “establishment” candidates from both political parties.  The shadowy “think tank” organizations that they have founded have provided the vast majority of the personnel for all presidential administrations since World War 2.

If you don’t believe this, just check it out for yourself.  Do some research on past presidential administrations and take a look at just how many cabinet members belonged to organizations such as The Bilderberg Group, The Trilateral Commission and The Council on Foreign Relations.  You will be absolutely astounded.

You see, the truth is that the “Republican Party” and the “Democratic Party” are simply two franchises that are controlled by the exact same owners.

For much more on who “the establishment” is, the following are a few good points to start….

*The Rise of the New Global Elite

But you never hear much about the “anti-Bilderberg” movement or the “anti-Federal Reserve” movement on the nightly news.

Instead, we are constantly being programmed that the real “fight” is the Republicans vs. the Democrats.

The vast majority of Americans are imprisoned within this artificial left/right paradigm and they can’t seem to break out of it.

But even when the establishment does not have us fighting about politics they are dividing us in other ways.

For example, it seems like almost every issue becomes about “race” these days.  The mainstream media loves to play up tensions between the races.

And so what are we seeing in America today?  Sadly, our country is becoming more divided among racial lines than ever before.

But the truth is that many of those that are most against illegal immigration are Americans of Mexican descent that came to America legally and that have worked hard to build a great life in the United States.  They resent all of the cheaters that are just hopping over the border and taking advantage of the system.

The other day I wrote an article entitled “Is Illegal Immigration Destroying The Southwest United States? 19 Immigration Facts That Very Few People Are Talking About“, and I quickly received some comments claiming that I was a racist and that I was full of hate.

Well, nothing could be further from the truth.  I believe that all people are of equal value and deserve to be loved and respected.  People on one side of a border are not more “valuable” than people on the other side of a border.  I simply want everyone to come through the “front door” so that we can stop the endless parade of gang members and drug dealers that are constantly pouring into the United States unchecked.

So is wanting all immigrants to go through the same legal process an irrational demand?

But the establishment media wants to make every issue about hate and about division.

And if there are some voices that the establishment media does not control that makes them even more nervous.

So how has the mainstream media reacted to the Tea Party movement?

Well, they mock and demonize those in the movement every time they can.

Tea Party activists are called “crazy”, “loco”, “insane”, “wacky”, “kooky” and “extremists”.  They are laughed at by network anchors while they are being interviewed.  There were even several very highly publicized law enforcement documents that circulated around the Internet last year that referred to Tea Party activists as potential terrorists.

So why are Tea Party activists vilified by the mainstream media so much?  Well, it is because that movement represents a sliver of a chance that the American people may take back control of the political process in this country.

The establishment cannot let that happen, because their whole system depends on control.

When this country was originally founded, we were not a divided nation.  It was the founding fathers vs. the monarchy and the financial establishment of England.  Our founders were mocked and ridiculed and very few people gave them any chance of succeeding.  Fortunately our founding fathers won and they were able to establish this great nation.

Well, once again today those fighting against the “financial establishment” are being mocked and ridiculed.  Politicians such as Ron Paul that point out that ultra-wealthy international bankers use the Federal Reserve to manipulate and control our financial system are marginalized by the mainstream media. But fortunately the American people are starting to wake up.

You just can’t keep truth down forever.  Eventually it will rise.  The following is a brief 5 minute speech by Ron Paul on the floor of the U.S. House of Representatives.  Let it be a reminder to all of us that we need to be united if we want to have any hope of turning America back around….