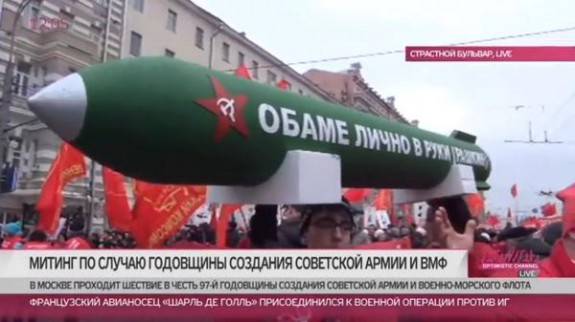 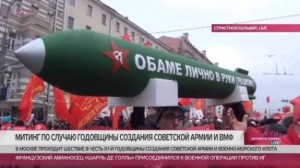 The Russian military and the U.S. military are going in two very different directions.  Military spending in Russia is increasing by a whopping 33 percent this year alone, and the Russians are feverishly preparing as if a major war with the United States is inevitable.  But despite the fact that the conflict in Ukraine has raised tensions with Russia to Cold War levels, the Obama administration is still acting as if we were living in a “post-Cold War” era.  Even while the Russians are arming themselves to the teeth, the U.S. military is being gutted.  In fact, the U.S. Army is in the process of being cut down to the smallest size that we have seen since the end of World War II, and the U.S. Navy is already the smallest that it has been since World War I.  There is very little political debate about this gutting of our military at the moment, but someday we may look back and bitterly regret not being more prepared.

No matter what your view of U.S. foreign policy is, we should all be able to agree that the U.S. Constitution mandates that it is the job of the federal government to protect this nation.  Sadly, according to one recent report the cutbacks that are happening right now have left the U.S. military only “marginally able” to defend this country…

The US military has become so depleted by cuts that it has been left only ‘marginally able’ to defend the nation.

Decreases in the number of soldiers and naval ships have led to armed forces falling short of President Obama’s national security strategy, a report by The Heritage Foundation claimed.

Yes, we are spending far more on our military than anyone else on the planet is.  But a tremendous amount of that is pure waste.

When it comes to the things that really matter for national defense, corners are being cut.  For example, as I mentioned above, the U.S. Army is in the process of being reduced to the smallest size that it has been since World War II…

The Quadrennial Defense Review announced last year that the Army would be cut from 570,000 soldiers to 440,000 – the fewest since World War II.

The Army historically commits 21 brigade combat teams to one war but would struggle to do this and leave reserves if there were two simultaneous conflicts, the report said.

And according to the Wall Street Journal, the U.S. Navy is already the smallest that is has been since World War I…

With the U.S. Navy arguably at its smallest since 1917, we don’t have many ships that are actually at sea. Only 35% of the Navy’s entire fleet is deployed, fewer than 100 ships.

But that is not all.  According to Stars and Stripes, the size of the U.S. Air Force is going to shrink by about 500 planes over the next five years…

The Air Force plans to cut nearly 500 planes from its inventory over the next five years if the Defense Department’s Fiscal 2015 budget request is approved by Congress, the service announced Monday.

The reductions — which would affect the active duty, Guard and Reserve — would be implemented in 25 states and the District of Columbia, according to a diagram provided by the Air Force. Only 47 planes would be eliminated overseas at a time when officials are emphasizing the importance of maintaining a strong forward presence to deter adversaries and respond quickly to crises.

For much more on how the U.S. military is being gutted, please see my previous article entitled “The Incredible Shrinking U.S. Military“.

At the same time all of this is going on, Russia is acting as if they knew that World War III was right around the corner.

According to CNN, the Russians plan to spend more than 20 trillion rubles to modernize their military by the year 2025…

Russia has begun investing heavily in upgrades to its military capabilities. President Vladimir Putin plans to spend more than 20 trillion rubles ($700 billion) bringing equipment up to date by 2025.

The modernization program is continuing despite an economic crisis that has already forced Russia to adopt an austerity budget for next year. 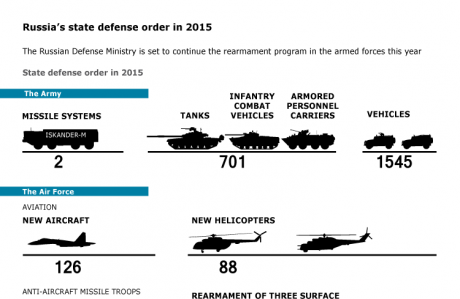 In addition, the Moscow Times is reporting that the Russian navy will be getting 50 new vessels in 2015.

So why are the Russians conducting such a massive military buildup?

Certainly the civil war in Ukraine is on their minds.  If there was a civil war up in Canada, the U.S. government would definitely be freaking out.  So it is understandable that the Russians are deeply concerned about what is happening to their neighbor.

But this military buildup by the Russians suggests that there is something more going on.

And I think that we can get a clue by looking at how the Russian military has been behaving.

For instance, the Russian air force recently conducted a drill which simulated an attack on NATO warships in the Black Sea…

Russian fighter jets are practicing attacking NATO ships in the Black Sea in another dramatic sign that tensions over Ukraine continue to build despite a fragile ceasefire agreed last month.

Asserting that the NATO ships are conducting drills based around “repelling air attacks,” Moscow is taking the opportunity to practice “maneuvering and conducting aerial reconnaissance” outside the range of the ships in order to “practice attack scenarios”.

In addition, Russian strategic bombers have been making increasingly aggressive movements in recent months.  The following is from an article that described an incident in which two Tu-95 bombers buzzed Norwegian airspace…

But on January 28 two more Tu-95 bombers, escorted by tankers and Russia’s most advanced MiG-31 fighter jets, showed up off the coast. One of them was carrying “a nuclear payload,” according to the London Sunday Express, which cited intercepted radio traffic. And last fall, a Russian Tu-22 supersonic bomber skirting Norway’s northern airspace was photographed carrying a cruise missile in launching position, according to the Barents Observer blog. Similar examples abound.

Adding to the potential for an unintended catastrophe, Russian warplanes typically lift off without filing a flight plan and cruise the busy commercial flight lanes with their transponders off, riling airline and NATO pilots alike. In recent months Russian warplanes have been engaging in Top Gun–style stunts far from home, popping up unannounced aside an SAS airliner on a flight between Copenhagen, Denmark, and Oslo and buzzing a Norwegian F-16 pilot.

And in the Pacific, two Tu-95 bombers recently buzzed Guam…

Two Tu-95 Bear H bombers made the flight around Guam, a key U.S. military hub in the western Pacific, on Dec. 13. No U.S. interceptor jets were dispatched to shadow the bombers.

One of the reasons this is done is to test our defenses.

They want to see how we would respond if it was the real thing.

In a future war with Russia, the key to winning will probably be to strike first.  The Russians know this, and so they are putting a special emphasis on modernizing their strategic nuclear forces…

According to the new Russian military doctrine signed by Putin Friday, Moscow reserves the right to use nuclear weapons in response to the use of nuclear weapons or any other types of weapons of mass destruction against Russia or its allies, as well as in the case of an attack with conventional weaponry that threatens the very existence of the state.

It is being reported that Russian Strategic Missile Forces are planning to conduct more than 100 drills in 2015.  Meanwhile, the Obama administration is treating the U.S. strategic nuclear arsenal as if it was an unwanted leftover from an era that is long gone.

I have written much more about this in the past, and I will not repeat all of it here.  If you would like to dig even deeper into all of this, please see my previous article entitled “10 Signs That Russia Is Preparing To Fight (And Win) A Nuclear War With The United States“.

To most Americans, a war with Russia is not even a remote possibility.

But there is a much, much different mindset inside Russia these days.

During one recent military parade, a large missile was paraded through the streets with a message to Barack Obama written on the side.  Roughly translated, the message says “to be personally delivered to Obama”… 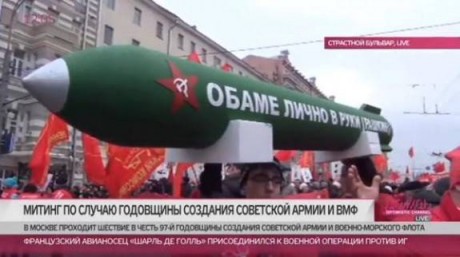 The Russians are preparing for war.

The United States is not.