The mainstream media in the U.S. is being very quiet about this, but the truth is that the U.S.-backed government in Kiev is starting to lose the civil war.  This week, the separatists captured the very important railway junction of Debaltseve despite the fact that a ceasefire is supposed to be in place.  Buoyed by a constant influx of Russian weapons and supplies, the separatists have gained a clear upper hand in the conflict.  But this was not supposed to happen.  When protest groups that were funded, organized and advised by organizations in the United States violently overthrew the democratically elected Ukrainian government, the Obama administration was hoping that the Ukrainian people would rapidly embrace their new pro-western leaders.  Instead, the nation was plunged into a very bitter civil war that could go on for many years.  And as the battlefield stands right now, the government in Kiev will probably be forced to concede even more territory in the months ahead as more weapons and fighters arrive from Russia.  The Obama administration could decide to intervene by shipping large amounts of weapons and supplies to the Ukrainian government, but that could turn the civil war in Ukraine into a proxy war between the United States and Russia.  And the thing about proxy wars is that sometimes they turn into real wars.

Earlier this month, the world rejoiced when a ceasefire between the government in Kiev and the separatists was announced.

But it didn’t last long.

As I mentioned above, this week the separatists took full control of Debaltseve.  The following is how CNN described the situation on the ground…

The scene of devastation is staggering in Debaltseve, the town at the heart of the battle between Ukrainian forces and pro-Russian separatists in recent days.

Barely a house is unscathed by shelling. Elderly civilians trapped by the fighting still cower in basements. After most Ukrainian forces pulled out Wednesday, the separatists are now in control.

It’s obvious there’s been a seismic shift on the battlefield. But it’s not yet clear what the Ukrainian withdrawal means for the shaky peace deal that came into force Sunday.

Will the separatists halt their offensive, satisfied with the territory they hold? Or will they be emboldened to push for more?

And of course this is all part of a much larger trend.  The separatists have been winning new territory for months.

I want to share with you a couple of maps.  This first map shows what the conflict looked like last summer.  As you can see, the territory held by the separatists was mostly limited to areas around the cities of Luhansk and Donetsk… 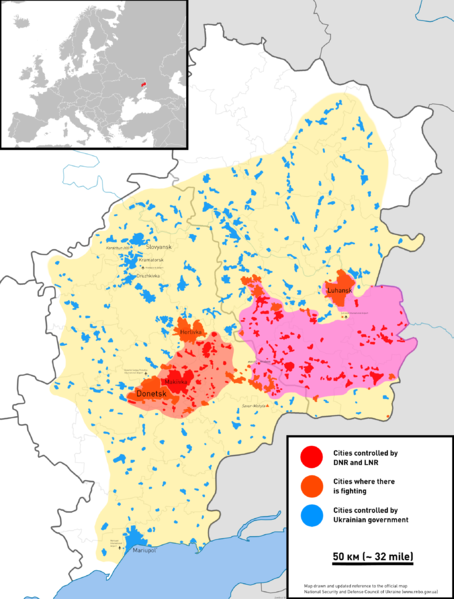 This next map shows what the conflict looks like today.  As you can see, the separatists have captured an enormous amount of territory… 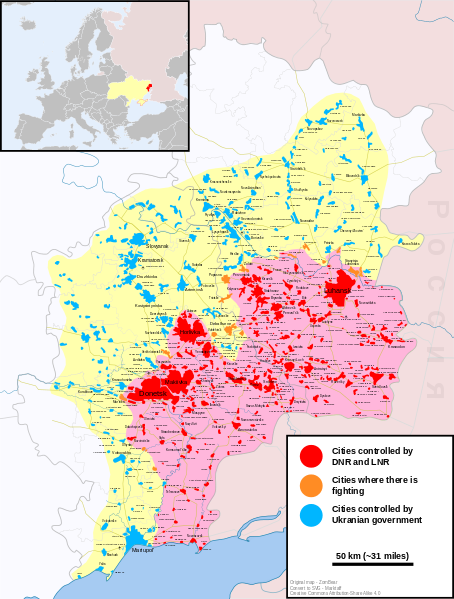 So have you heard about this from the mainstream media in the United States?

Could it be that we aren’t supposed to know that the U.S.-backed government in Kiev is actually losing the war?

Needless to say, this would never have been possible without the direct involvement of Russia.  Publicly, the Russians are denying that they are funding, supplying and arming the separatists.  But everyone knows that they are.  The Russians consider the civil war in Ukraine to be a fundamental matter of national security.  And it is hard to blame them.  Just imagine how the U.S. government would be responding if there was a civil war in Canada.

So with massive Russian backing, the separatists have been able to turn the tide of the war very much in their favor.  The following is an excerpt from a recent Business Insider article…

The battlefield gains by the separatists throughout the east of the country can be attributed to the constant inflow of Russian weaponry. In Nov. 2014, Russia moved a column of tanks and artillery into eastern Ukraine drastically changing the battlefield calculus.

In addition to tanks and artillery, Russia has provided the separatists with arms ranging from grenade launchers and mortars to anti-tank weapons and anti-aircraft guns.

As a result, Russian-backed rebels have huge military advantages over Ukraine. Crucially, the rebels receive logistics and armaments from the Russian military while also being able to take refuge in Russia during a Ukrainian assault.

This is not how the Obama administration wanted things to go.

So what is Obama going to do?

It is hard to say.  But there is little doubt about what the hawks in Congress want to do…

On Capitol Hill, however, lawmakers on both sides of the aisle had a clear message Thursday for the president: arm Ukraine.

“It is time to give Ukraine the ability to defend itself,” Sen. Kelly Ayotte, R-N.H., said. “It is past due.”

Sen. Jack Reed, D-R.I., top Democrat on the armed services committee, said the “key here is to give the Ukrainians the ability to defend itself and to get back to a political solution.”

Sen. Bill Nelson, D-Fla., said the non-lethal aid the U.S. already is sending “is not enough when you are facing the Russian bear.”

But do we really want to start a proxy war?

As I mentioned above, proxy wars can ultimately lead to real wars.

And in the case of the United States and Russia, a real war could mean the use of nuclear weapons.  For much more on this, please see a couple of my previous articles…

-“While Obama Snoozes, Russia Is Preparing For Nuclear War With The United States”

We should have never interfered with the democratically elected government in Ukraine in the first place.

And now that war is raging in Ukraine, I fear that the United States and Russia have been put on a collision course which will end very, very badly someday.

So what do you think?  Please feel free to add to the discussion by posting a comment below…