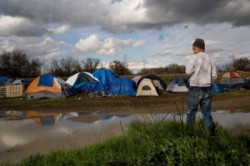 What would you do if you had your job suddenly ripped away from you and you ended up losing your home?  Well, that is exactly what hundreds of thousands of families across America have found themselves facing during this economic downturn.  So what would you do?  Would you move in with relatives?  Would you join the ranks of those living in the tent cities that are popping up all over the nation?  Would you live in a van down by the river?  The truth is that with each passing month even more Americans find themselves pushed to the brink of absolute desperation.  For many of our fellow citizens, the American Dream has been reduced to finding some way to keep the rain off of them each night and finding someone who will be kind enough to give them some food during the day.

So why are so many Americans hurting?  Where did all the good jobs go?  Well, over the past couple of decades our new “global economy” has encouraged big corporations to move thousands of factories and millions of jobs out of the United States.  Many of the good jobs that these homeless and unemployed Americans used to do are now done on the other side of the world.  The ironic thing is that many of the tent cities that have bloomed in communities across the United States are filled with tents that were made in China.

Unfortunately, the tent cities that have grown up all over the nation are just a foretaste of what is coming in the future.  When the economy really collapses, millions more Americans are going to be living in conditions just like this….

One of the saddest things about all of this is what is happening to older Americans.  There are large numbers of older Americans that have worked hard all of their lives but that now find everything just slipping away.

A reader of this column named William recently left the following comment….

I thought I would try to start things rolling here. I am a 46 year old 99er, who just found out last week that unemployment is done. I was making $283/week which I am very thankful for, but was not enough to pay the mortgage on our small 2 bedroom, 1941 cape, ( mostly because of increasing taxes). I have been doing misc. barter jobs in trade for others services or food, etc. I have been sending resumes all around, but no bites. I am a 25 year veteran, high end woodworker. I even have some AutoCad and CNC experience, but evidently not enough experience in this economy to land me a job.

We are on the edge of not being able to pay mortgage, even though our cars are paid off, we have no phone, no cable, and the wife cooks all the meals, and I did not mention, we don’t have kids either. Just two people trying to make ends meet.

At least William and his wife still have a home (for now) and are hanging in there.  There are countless others that have not been so fortunate.  In fact, in the three counties surrounding Disney World, it is estimated that there are approximately 8000 people living in the woods.  What some of those people have to face on a daily basis is absolutely horrifying….

Can you imagine living that way?

Sadly, many local communities across the United States are cracking down on homeless people because they simply do not want to deal with them.

In Venice, California the police are actually arresting people that are living in RVs and are towing away their vehicles. The following is an excerpt from an article that recently appeared on the Daily Kos website….

They took Eric while he was changing his battery in his car. Claimed he lived in his car. A few days later they went to 3th Street and took his RV because he was in jail and no one moved it for 72 hours. Saturday they did a sweep of 7th and took Bear and his RV. They also took Elizabeth’s RV but do not know if they took Elizabeth but can not find her. The police went to 6th and took the white RV that always parks by Broadway on 6th. Everyday they take 1 to 4 RVs. Very soon there will be no one left.

If you lost your home would you try to live in your vehicle?

Well, the truth is that it is not so easy.  In fact, just on Friday a 56-year-old homeless man in northwestern Montana that was living in his car froze to death after his car battery died.

Once you have been kicked out of your home it is not easy to survive.

That is why so many Americans are so desperate to hang on to their homes.

But what do you do when you can’t find a job and your money has dwindled away to almost nothing?  What do you tell your children when there is not enough money for food?

The following quote from a Huffington Post article comes from a 99er named Toni. It kind of sums up the frustration and anger that so many unemployed Americans are feeling right now….

“How does someone explain to their child that they can have a place to live and maybe stay warm in the winter, but in order to do that they won’t have any food to eat? Or they can eat, but may not have a secure place to live? Just try to explain those adult decisions to a child and see how much they understand!”

Unfortunately, many Americans respond to such suffering by saying that people like this “should just get a job”.  But as I wrote about recently, the truth is that there are not nearly enough jobs for everyone who wants one anymore.

In fact, in the United States today there are over 6 million Americans that have been out of work for 6 months or longer.  In such an environment, “black market industries” such as drug dealing and prostitution are thriving as desperate Americans look to survive any way that they can.

A woman identified only as “oldandtired” recently posted the following very sad message on the Unemployed-Friends website….

How did I get here? I have donated, volunteered, etc. for those in need for decades. Now, I have $2.34 to my name. I have lost my home, filed bankruptcy, and have been separated from my daughter. I have not seen a doctor in three years. I keep looking for work, but it is like a cruel joke – and the joke is on me. I exist day to day on the charity of family and I try to keep in mind that so many of you don’t have that option.

My eyesight has been bad for most of my life. I am -8.25 and -8.50 for vision. For those of you who know the eyes, you realize that I am so near-sighted that I am legally blind when not corrected. However, I am corrected with contacts or glasses – neither of which I can afford. Contacts ran out last year and my glasses are almost 10 years old (my fault for not getting new ones when I had a job). Don’t you know? The f#$%ing things broke. No chance of fixing. No contacts. How the heck am I supposed to get work when I can‘t see????? There is no social services available without an address, and I am homeless. A PO box doesn’t cut it.

Okay, the eternal optimist isn’t being so optimistic, eh? I catch myself thinking the word ‘hate’ lately. It is a word that was never in my vocabulary before. I hate politicians. I hate the economy. I have even begun to resent and hate people who have jobs. Sometimes, tears just fall from my cheeks and I can only think of those two words…..”I hate”.

If any of you knew me, you would know how bizarre this is for me. My spirit needs a boost, but I hate to even try anymore. Anyone got a good joke? One that will make me laugh until I cry instead of me just crying.

The president and I are the same age. Retirement is so far off. Why is my life over already?

So what can the rest of us do about all of this?

Well, first of all we can all reach out and help those we know that are in need.

Secondly, we can all start preparing for the hard times that are coming. Instead of maxing out our monthly budgets, we should all be setting aside some extra money in case we lose our jobs or businesses. In addition, we should be storing up extra food and supplies for when the U.S. economy totally collapses.

Unfortunately, the U.S. economy is not going to be getting better in the long-term.  We are living in the greatest debt bubble in the history of the world, and when it bursts things are going to get far worse than they are now.

So don’t look down on the millions of Americans that are really suffering right now, because one day you might be the one that is suffering.