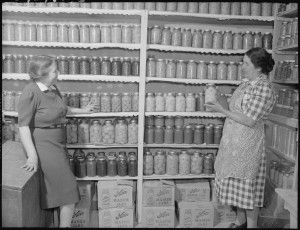 If you and your family store up lots of food, will you be identified as “potential terrorists” by law enforcement authorities?  That sounds like an insane question, but sadly it has gotten to the point where “preparing for the worst” has become a “suspicious activity”.  Today, there are millions of preppers all across the United States, and the vast majority of them just want to be left alone and do not want the government to interfere in their lives.  Storing up food is a completely peaceful activity, and preppers are generally some of the most patriotic and law-abiding people that you could ever hope to meet.  Unfortunately, prepping has become associated with “extremism” by many in the government, and lately we have seen some very disturbing signs that authorities are actively seeking to gather information on preppers.  So are preppers now considered to be potential terrorists?  Well, read the evidence posted in the rest of this article and decide for yourself.

The other day, U.S. Senator Rand Paul gave a speech on the floor of the U.S. Senate during which he suggested that having “more than seven days of food” in your house could potentially get you branded as a “potential terrorist” by the federal government.  The following is an excerpt from that speech….

Know good and well that some day there could be a government in power that is shipping its citizens off for disagreements. There are laws on the books now that characterize who might be a terrorist.

Someone missing fingers on their hands is a suspect according to the Department of Justice. Someone who has guns, someone who has ammunition that is weatherproofed, someone who has more than seven days of food in their house can be considered a potential terrorist.

If you are suspected by these activities do you want the government to have the ability to send you to Guantanamo Bay for indefinite detention?

You can see video of this speech right here.  It is incredibly chilling to hear a defender of liberty such as Rand Paul warn of such things.

But just because a politician says something that does not always mean that it is true.

So is there any evidence that Americans that are storing up food are being watched by the federal government?

Unfortunately, there is.  In fact, Oath Keepers has posted a report about one incident in which federal agents actually visited a food production facility and demanded the names of anyone that has been “purchasing bulk food”.  The following come from an article about this incident that was recently written by Rand Cardwell, the president of the Tennessee chapter of the Oath Keepers….

A fellow veteran contacted me concerning a new and disturbing development. He had been utilizing a Mormon cannery near his home to purchase bulk food supplies. The man that manages the facility related to him that federal agents had visited the facility and demanded a list of individuals that had been purchasing bulk food. The manager informed the agents that the facility kept no such records and that all transactions were conducted on a cash-and-carry basis. The agents pressed for any record of personal checks, credit card transactions, etc., but the manager could provide no such record. The agents appeared to become very agitated and after several minutes of questioning finally left with no information. I contacted the manager and personally confirmed this information.

Why in the world would federal agents be so interested in Americans that are “purchasing bulk food”?

Don’t they have anything better to do?

As I have written about previously, authorities are also now using a tool developed by the CDC to conduct “door to door disaster preparedness assessments” in some areas of the United States.

The following comes from a local news report in Tennessee….

I don’t know about you, but I don’t want anyone coming to my door to “assess” how “prepared” I am.

This is all very, very disturbing.

Lately, the federal government seems absolutely obsessed with the distribution of food.

Aren’t there bigger threats to national security than the Amish?

Unfortunately, we now live in a “Big Brother” police state where just about anything can be considered a “suspicious activity”.

In fact, according to the FBI a bulk purchase of “meals ready to eat” is now considered to be “suspicious activity” that should be reported to them.

When the “war on terror” started a decade ago, we were told that we needed to fight the terrorists “over there” so that they would not come over here.

Well, now we are being told that the United States itself is part of the “battleground” and that the “terrorists” might just be our neighbors.

We are being told that if we “see something” that we should “say something” to the government.

In essence, the federal government wants us all to “inform” on one another.

Now that most of the big name terrorists have been removed from the picture, the Obama administration and the mainstream media are really hyping the idea that “homegrown terrorism” is a grave danger.

Just check out these headlines from the past few days….

The entire focus of the “war on terror” has shifted.  According to FBI Director Robert Mueller, “homegrown terrorists” represent as big a threat to American national security as al-Qaeda does at this point.

America is rapidly changing, and not for the better.  All of this paranoia is going to rip this country apart.

In addition, have you noticed how they have taken the word “Islamic” out of their description of the terrorists and have replaced it with words like “extremist” and “extremism”?

Well, the truth is that just about anyone can be considered an “extremist” in one sense or another.

In fact, a recent Salon article asked this question: “Are Evangelicals A National Security Threat?”

These days, if you support an “alternative” political candidate there is a good chance that you will be labeled as an extremist.

Today, if you have a religious or political ideology that differs from the “orthodoxy” of the federal government then you are probably considered to be an “extremist”.

Beliefs that were once considered normal are now considered to be “dangerous” and “radical”.

For example, one unclassified Department of Homeland Security report published a couple of years ago entitled “Right-wing Extremism: Current Economic and Political Climate Fueling Resurgence in Radicalization and Recruitment” claimed that a belief in Bible prophecy “could motivate extremist individuals and groups to stockpile food, ammunition and weapons.”

During a Congressional hearing earlier this year, U.S. Representative Sheila Jackson Lee warned that “Christian militants” might try to “bring down the country” and that such groups need to be investigated.

Back on February 20, 2009, the State of Missouri issued a report entitled “MIAC Strategic Report: The Modern Militia Movement“.  That report warned that the following types of people may be potential terrorists….

As I have written about previously, a very revealing document obtained by Oath Keepers shows that the FBI is actually instructing store owners to report many new forms of “suspicious activity” to them.

All of this is completely and totally ridiculous.

Law enforcement authorities should quit worrying about preppers.  The vast majority of us that are preparing for the hard times that are coming truly love this country, are completely and totally non-violent, and just want to be left alone.

There are real threats to national security out there, but the federal government refuses to address them.  For example, our border with Mexico is wide open and it has been documented that terror groups are working in northern Mexico and have been coming across the border on a regular basis.

But instead of securing the border, the Obama administration is granting “backdoor amnesty” to illegal aliens instead.

In addition, law enforcement authorities should look into the massive breach of national security that the “Fast and Furious” scandal represents.  With the full knowledge of the Department of Justice, ATF agents facilitated the sale of thousands of guns to Mexican drug cartels and dropped all surveillance on those weapons once they crossed the border.  Those guns will be used to kill people (including Americans) for many years to come.

In fact, there is so much corruption and so many “potential terrorists” in Washington D.C. that it should be more than enough to keep law enforcement officials busy for a very long time.

Preppers are not a threat.  They are not going to hurt anyone.  They just want to store up food and prepare for the difficult times that are coming.

So what do all of you think about preppers?  Please feel free to leave a comment with your opinion below….