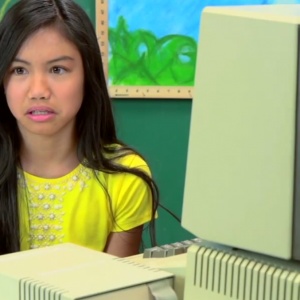 The disconnect between what Americans should care about and what Americans actually do care about is really quite frightening.  You see, the truth is that far more Americans are drawn to articles with headlines such as the one above than to news stories that actually talk about substantive issues of real importance.  Don’t worry – if you came here hoping to see Kim Kardashian’s wedding dress or kids reacting to old computers, you will get to see those things below.  But in this article I am also going to discuss some of the hard issues that most of the people in our entertainment-addicted society usually ignore.  You see, it is a crying shame that Americans know more about Kim Kardashian than they do about the Federal Reserve.  It is a crying shame that a video about a cat playing Jenga can go viral while the systematic destruction of our most basic freedoms and liberties is virtually ignored by a deeply apathetic society.  My hope is that we can start to wake up a lot more people, because time is running out.

But before we get to the important stuff, I want to be a man of my word.

Firstly, here is a YouTube video about Kim Kardashian’s wedding…

And here is a video of kids reacting to old computers…

Those kids are just hilarious!

And as promised, here is a video of a cat playing Jenga…

There is certainly nothing wrong with any of those videos.

We all need to smile once in a while.

But we have gotten to the point where most people in our entertainment-addicted society demand a constant diet of intellectual pablum and never even stop to think much about the really important things.

Below, I have listed in no particular order some of the incredibly important social, political and moral issues that are being seriously neglected by the American people today…

-Most of the members of Congress and the con man in the White House are deeply corrupt and are marching this country toward oblivion.

-Our politicians have racked up 17.5 trillion dollars of debt that future generations of Americans will be expected to repay.

-Right now, one out of every five American families do not have a single member that is employed.

-The homeownership rate in the United States has dropped to the lowest level in 19 years.

-Our liberties and our freedoms are being systematically destroyed, and America is becoming more of a police state with each passing day.

-More radioactive material from the destroyed Fukushima nuclear facility is released into the Pacific Ocean every single day.  Since the half-life of many of these elements is measured in decades, this radioactive material will be in our food chain for the remainder of our lives.

-The fluoride that they are putting into our water is having a horrible impact on the neurological development of our children.

-Most of the “food” that we are being sold in our grocery stores is highly toxic.

-George Soros has admitted that an organization that he founded “played an important part” in the violent overthrow of the Ukrainian government.

-U.S. relations with Russia continue to get even worse, and Russia is openly discussing a “de-dollarization” strategy which would be a massive blow to the monopoly of the petrodollar.

-The blatant manipulation of the price of gold has finally been publicly exposed and is now out in the open.

-Barack Obama is pushing a new international trade agreement known as the Trans-Pacific Partnership which would result in millions more good jobs being shipped out of the country.

-The federal government has been treating our military veterans like human garbage for years, and nothing ever seems to change no mater how much people protest about it.

-Americans are the most drugged up people in the entire world (this includes both legal and illegal drugs).

-According to the Centers for Disease Control and Prevention, doctors in the United States write more than 250 million prescriptions for antidepressants each year.

-The Ring of Fire is becoming increasingly active and this has tremendous implications for the west coast of the United States.

-We are experiencing the worst drought since the days of the Great Depression, and Dust Bowl conditions are now returning to areas in the heartland of America.

-Approximately one-third of the population of the United States (110 million people) currently has a sexually transmitted disease.

-Very few people seem to care much about this anymore, but more than 56 million American babies have been slaughtered in the United States since Roe v. Wade was decided in 1973.

-All over the globe, scientists are creating extremely bizarre human/animal hybrids in their labs.

-As poverty explodes, the level of government dependence in the U.S. has reached an unprecedented level.

Since the Federal Reserve was established a little bit more than 100 years ago, there have been 18 recessions or depressions, the value of the U.S. dollar has declined by 98 percent, and the U.S. national debt has gotten more than 5000 times larger.  And now the Federal Reserve has set the stage for the greatest financial crash in history, but most Americans still don’t even understand what the Federal Reserve is or how it operates.

Of course this list could easily be much, much longer.

But hopefully I have made my point.

We are facing crisis after crisis, and all of our long-term problems as a society continue to get even worse.

We desperately need the American people to wake up and start caring about these things, but most of them are so glued to the entertainment being fed to them by their phones, their computers and their televisions that they might as well be zombies.

Is there any hope for the American people?