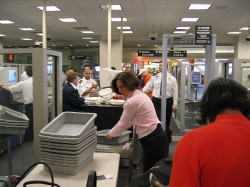 In America today, we have become so spooked by “terror threats” that now we will submit to just about anything in the name of security.  At this point, we are allowing ourselves to be treated as little more than cattle.  Procedures that would once be considered an affront to human dignity are now accepted as “the new normal”.  If you want to get on an airplane in America today, you must either go through one of the incredibly intrusive full body scanners that are going into all U.S. airports and let airport security gawk at your exposed body, or you must allow airport security to feel you up using the new “enhanced pat-down” techniques they are being instructed to employ.  As you will see below, these new pat-down procedures are incredibly intrusive.  If anyone tried to touch us like that out on the street they would be put in prison.  But this is the new America where all of us must give up all of our privacy and all of our dignity just so that everyone can feel a little bit safer.

Up until this week, many Americans were not that concerned about the new full body security scanners going into airports across the nation because they still had the alternative of opting for a minimally intrusive pat-down.  But now that has all changed.  It turns out that too many Americans were opting for the pat-down, so now the TSA is rolling out their new “enhanced pat-down” procedures.

Previously, airport security officials used the backs of their hands to pat down passengers, but now they are being required to use the fronts of their hands.  This includes directly touching some body parts that would just receive only a quick brush over with the back of the hand before.

A recent story by ABC News featured an expert explaining what these changes will mean for a female passenger….

“You go down the body and up to the breast portion,” said Charles Slepian of the Foreseeable Risk Analysis Center. “If it’s a female passenger, you’re going to see if there’s anything in the bra.”

These new procedures are so highly intrusive that even those who work for the mainstream media are starting to seriously complain.

For example, CNN employee Rosemary Fitzpatrick was absolutely horrified when she was recently patted-down by airport security.  According to her, the airport security official ran her hands around her breasts, over her stomach, buttocks and her inner thighs, and even touched her most private areas.  The following is how Fitzpatrick described how she felt about the experience to CNN….

But if you want to get on a plane in America today, this is the kind of thing you are going to have to go through.  Nobody is exempt.

For example, an airline pilot based in Memphis who recently refused both the enhanced pat-down and the full body scan was barred from flying.

Things are getting completely and totally ridiculous.  The following is an ABC video news report about these new enhanced pat-downs….

These scanners even reveal intimate medical details such as colostomy bags and mastectomy scars.

Do you really want gawking security guards to have the exposed images of your wife and children permanently embedded into their memories as they walk through these scanners?

I apologize for being so graphic, but it is important for everyone to know exactly what is at stake here.

According to a BBC report, this kind of thing is already going on.  Security workers are mostly young adults, and when they see exposed bodies they are going to be tempted to stare.

Not only that, but do you really want millions of pregnant women to have their babies absolutely showered with high levels of radiation as they pass through these machines?

In addition, it has come out that these new full body scanners have the capability to store and transmit images.  You never know, one day a picture of you might end up on the Internet.

What is at stake in all of this is our very way of life.  When we allow threats, whether “real” or “imaginary”, to alter our lives so much that we are willing to give up all dignity and all privacy, then we have lost.  In a previous article entitled “The Open Society Is Dying” I commented on this creeping loss of our freedoms and what it means for our future….

The America that we all used to know and love is dying.  The sad truth is that America is no longer the home of the free.  The mainstream media tells us that security is preferable to freedom and we believe them.

Yes, there are always going to be very serious dangers out there in the world, but if we constantly cower before these dangers we will forget what it is to really live.

Privacy and freedom are not easy to get back once they have been totally stripped away.  It is absolutely imperative that we all remember that.