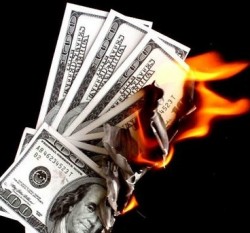 A new television ad about the U.S. national debt produced by Citizens Against Government Waste has been deemed “too controversial” by major networks including ABC, A&E and The History Channel and will not be shown on those channels. The commercial is a homage to a 1986 ad that was entitled “The Deficit Trials” that was also banned by the major networks.  Apparently telling the truth about the national debt is a little too “hot” for the major networks to handle.  But perhaps it is time to tell the American people the truth.  In 1986, the U.S. national debt was around 2 trillion dollars.  Today, it is rapidly approaching 14 trillion dollars. The American Dream is being ripped apart right in front of our eyes, but apparently some of the major networks don’t want the American people to really understand what is going on.

The truth is that the ad does not even have anything in it that should be offensive. The commercial is set in the year 2030, and the main character is a Chinese professor that is seen lecturing his students on the fall of great empires. As images of the United States are shown on a screen behind him, the Chinese professor tells his students the following about the behavior of great empires: “They all make the same mistakes. Turning their backs on the principles that made them great. America tried to spend and tax itself out of a great recession. Enormous so-called “stimulus” spending, massive changes to health care, government takeover of private industries, and crushing debt.”

Perhaps it is what the Chinese Professor says next that is alarming the big television networks: “Of course, we owned most of their debt, so now they work for us”.

So is this television commercial offensive? Watch it below and decide for yourself….

Does this ad not make some great points?

Month after month, thousands of jobs and billions of dollars gets transferred permanently from the United States to China.

The Chinese government has accumulated hundreds of billions of excess dollars, and U.S. government officials now regularly make trips over there to beg them to keep lending more money to our government so that we can continue to go on living far beyond our means.

But the borrower always ends up as the servant of the lender, and we are rapidly becoming the servants of the Chinese.

But it did not have to be this way.

We did not have to merge the U.S. economy into a globalized one-world economy where U.S. workers are put in direct competition for jobs with millions of Chinese workers that make less than a dollar per hour.

Factories, wealth and jobs are leaving the United States at a blinding pace.  Since 2001, approximately 42,400 American factories have closed their doors.

America is being deindustrialized, and the sad thing is that most Americans do not even realize that it is a major problem.

China is accomplishing this by openly manipulating currency rates, by allowing their population to be paid slave labor wages and by putting up unfair barriers to U.S. goods.

And our politicians are letting them get away with it.

So China is winning and we are losing.  In fact, one prominent economist is now projecting that the Chinese economy will be three times larger than the U.S. economy by the year 2040.

So what do you think?  Do you think that television networks should be banning the new ad by Citizens Against Government Waste?  Feel free to leave a comment with your opinion….