What in the world is happening to America?  All around us there are disturbing signs that the slow-motion collapse of society is accelerating.  With each passing year, criminals seem to be getting more desperate and more twisted.  Some of the sick things that some people are willing to do to their fellow human beings are simply beyond description.  What kind of psychotic individual would hold elderly men captive for a decade in order to get their Social Security and veteran benefit checks?  How depraved do you have to be before you are able to convince yourself to rape a 16-year-old girl and then throw her body off of a roof?  What kind of heartless teens would pour gasoline on an innocent boy walking home from school and then set him on fire?  The social decay that is eating away at our nation like cancer is starting to get a lot worse, and yet there are still lots of people out there that will flat out deny that society is collapsing.  They have totally bought into the propaganda being pushed by the mainstream media, and they are fully convinced that things in America are actually getting better even though our communities are literally coming apart at the seams all around us.  How much worse do things have to get before everyone finally is willing to admit that we have a major problem on our hands?  The following are 12 signs that the decay of society is accelerating…

#1 Elderly Men Held In A “Dungeon” In Houston

Four elderly men in Houston were recently rescued from the “dungeon” that they were being held in.  The goal of their captors was apparently to confiscate their Social Security and veteran benefits checks…

Four men found living in “deplorable conditions” in a Houston garage told police that they were being held captive after being lured by promises of alcohol and cigarettes so that their captor could cash their public-assistance checks, authorities said.

When police arrived at the place they were being held, they found that the doors had literally been nailed shut…

Around 8am Friday, a neighbor called 911, fearing there some was something suspicious going on in the home. Police say when they arrived they discovered four men living in some sort of converted garage without beds or even a restroom.

One by one, the alleged captives were taken away on stretchers. They’re sick, malnourished and confused. Police say they were being held in the home against their will — possibly for years.

#2 The “Bash Mobs” Of Southern California

Over the past few years, “flash mob crimes” have become increasingly popular.  According to the Los Angeles Times, police in Southern California are now calling these group crime waves “Bash Mobs” and they are deeply concerned about the surge in these types of events in recent days…

In the last several days, there have been several reports of such group crime waves in South L.A., Hollywood, San Bernardino and Victorville. Long Beach police are bracing for another one Friday.

These so-called bash mobs of “flash mob” crime waves are organized through social media and have been a problem in Chicago, Philadelphia and Washington.

How sick do you have to be to rape a 16-year-old girl and then throw her off a roof?…

Police have arrested one man and are searching for a second suspect after they allegedly lured a 16-year-old girl to a Brooklyn roof, where they raped her before throwing her off,  leaving her with serious injuries to her leg, arm and back, authorities said.

Authorities say the two men, ages 24 and 26, lured the teenage girl to the roof of a three-story building on Miller Avenue in East New York early Sunday.

They allegedly raped her and flung her off the roof after at least one of them tried to strangle her, police said.

According to the New York Daily News, a 50-year-old Brooklyn man got much more than he was bargaining for when he was lured up to the roof of a four-story building with promises of sex…

A 50-year-old Brooklyn man who fell to his death from atop a four-story building was lured onto the roof by two women who had promised him sex, police sources said Thursday.

Instead of showing Robert Reichl a good time, the women led him into a trap shortly after midnight on Wednesday — and stole $2,000 in cash he had been carrying.

Three toughs were waiting on the roof of the building on Fourth Ave. near 47th St. in Sunset Park, the sources said, and at some point the men attacked Reichl.

One of them, Ruben Santiago, sprayed Reichl in the face with a chemical spray believed to be mace that caused the victim to reel back, lose his balance and fall off the rooftop, the source said.

Would you defecate next to someone else’s house?  Would you do it multiple times?…

An Albuquerque, New Mexico, man was in for a vile surprise when he realized that a random woman has been defecating next to his house during her morning jogs. The bizarre and grotesque act — which has purportedly occurred at least four times — has been caught repeatedly on a security camera.

The homeowner, who wishes to remain anonymous and goes by the alias “Bobby,” went to local ABC affiliate KOAT-TV with the footage in an effort to try and track the woman down — or to, at the least, shame her into stopping the unsanitary antics.

According to CNN, there is a company called “Paladin Deception Services” that you can actually hire to tell lies for you…

Timothy Green, a 59-year-old former private detective, claims to run a company in Forest Lake, Minn., that will lie to anyone about anything.

Its name is Paladin Deception Services, and it advertises its services for $54 per month.

Green says customers run the gamut — from cheating spouses in need of alibis to people playing hooky from work. But the real demand comes from job seekers, making up more than 60% of what he says are its 250 to 300 monthly clients.

“We can replace a supervisor with a fictitious one, alter your work history, provide you with a positive employment reputation, and give you the glowing reference that you need,” Paladin’s website states.

#7 The Violence In Chicago Just Continues To Get Worse

The violent crime wave in Chicago is showing no signs of letting up.  In fact, just check out what happened this weekend between Friday night and early Sunday…

Six men have been killed and at least another 17 people — including a 6-year-old girl — have been wounded in shootings across the city since Friday night.

It just doesn’t pay to be a store clerk in some neighborhoods these days.  Many of them only make minimum wage, and the abuse that they take from some customers is terrible…

The 51-year-old clerk was behind the counter of the store when a man went into the store and asked the clerk if he had triple extra large sized tank top t-shirts, O’Brien said.

Another merchant on the block said she saw the clerk run out after the man fled.

“He went out on the street to cry for help,’’ his body covered in blood, she said.  “It was very unfortunate, very vicious.’’

According to Fox News, law enforcement authorities in the Cleveland area are concerned that they may have uncovered the work of yet another serial killer…

The police chief of a Cleveland suburb told searchers Sunday that he believes there could be one or two more victims in addition to the three bodies found in the neighborhood earlier.

Police Chief Ralph Spotts told volunteers checking vacant houses to be alert for smells of rotting. He declined to elaborate on other possible victims. East Cleveland Mayor Gary Norton said authorities have a lot of reasons to suspect there are more, but he refused to say why.

Why does Cleveland seem to produce so many of these sickos?

Who in the world would try to kill a tee-ball coach in front of a bunch of children?…

A T-ball coach was stabbed in the neck just after a youth baseball game in Hoyne Park on Sunday, allegedly by a young ballplayer’s jealous father looking for his ex’s new boyfriend.

The coach suffered a severed artery and was listed in critical condition after surgery. Although the T-ball game had just ended, there were still players present during the attack, according to a person familiar with the incident.

Other children were arriving for the next game.

According to a shocking article in the New York Post, many food stamp recipients in New York are buying food with their EBT cards and shipping it off to relatives in foreign countries…

Food stamps are paying for trans-Atlantic takeout — with New Yorkers using taxpayer-funded benefits to ship food to relatives in Jamaica, Haiti and the Dominican Republic.

Welfare recipients are buying groceries with their Electronic Benefit Transfer (EBT) cards and packing them in giant barrels for the trip overseas, The Post found.

The practice is so common that hundreds of 45- to 55-gallon cardboard and plastic barrels line the walls of supermarkets in almost every Caribbean corner of the city.

As I have written about previously, something really seems to be wrong with American kids these days.  For example, no normal kids would  pour gasoline on a 13-year-old boy and light him on fire…

A 13-year-old boy who police say was doused with gasoline and lit on fire last week while walking home from school is recovering from first-degree burns to his face and head.

And remember, right now the economy is still at least somewhat stable.

How much worse is the decay of society going to get once the economy really starts falling to pieces?

Desperate people do desperate things, and once all hope of an economic recovery is gone I believe that we are going to see a huge wave of crime and civil unrest in this nation.

And all of this comes at a time when police forces are being cut back all over the country.  For example, as I wrote about the other day, the size of the police force in Detroit has been reduced by approximately 40 percent over the past ten years.

You can see some photos of the ruins of Detroit right here.  Will hundreds of our cities eventually look like this?

America is changing, and not for the better.  On a very basic level, people seem to be losing a sense of love and respect for their fellow human beings.  If this continues, we will soon get to a point where many people will literally become afraid to interact with one another.

The thin veneer of civilization that we all take for granted is starting to disappear.  Once it is gone, it will be incredibly difficult to get back. 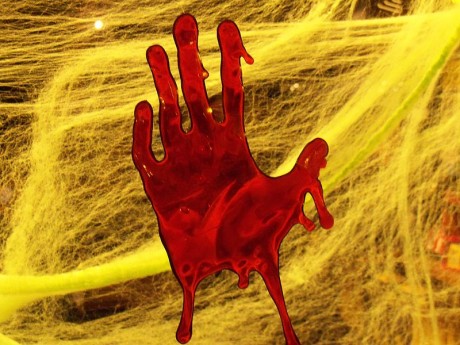