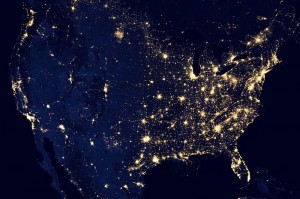 It is only a matter of time before a massive EMP burst fries the U.S. electrical grid.  What that happens, how are you going to survive?  In the United States today, we are completely and totally dependent on electrical power.  Unless you are Amish (or are a part of a similar community), you probably have absolutely no idea how to survive in a world without electricity.  Unfortunately, our electrical grid is extremely vulnerable at this point.  As you will see below, intelligence officials believe that China and Russia already have “super-EMP weapons”, and a whole host of smaller nations and terrorist groups are believed to be working on developing similar weapons.  But even if the U.S. is never attacked by an EMP weapon, scientists tell us that it is inevitable that a massive solar storm will fry our electrical grid someday.  If an event similar to the solar storm of 1859 happened today, it would be absolutely catastrophic.  Known as “the Carrington Event”, that massive solar storm fried telegraph machines all over Europe and North America.  At some point we will experience another such solar storm, and some scientists believe that we are already 50 years overdue for another one.  In fact, the earth had a “near miss” just a few months ago.

So what will happen if we are hit by a massive EMP blast?  Well, according to a government commission that investigated this issue, approximately two-thirds of the U.S. population could potentially die from starvation, disease and societal chaos within one year.  It would be a disaster unlike anything that we have ever seen before in U.S. history.

Frank Gaffney, the president of the Center for Security Policy, is even more pessimistic.  He believes that a single EMP blast could potentially end up killing almost the entire population of the United States…

“Within a year of that attack, nine out of 10 Americans would be dead, because we can’t support a population of the present size in urban centers and the like without electricity”

As a society, we are simply not equipped to function without electricity.  Dr. William Graham was the chairman of the government commission that I mentioned above, and he says that a giant EMP blast could knock the United States back into “the late 1800s” in just a single moment…

Life after an EMP attack “would probably be something that you might imagine life to be like around the late 1800s but with several times the population we had in those days, and without the ability of the country to support and sustain all those people,” Graham says. “They wouldn’t have power. Food supplies would be greatly taken out by the lack of transportation, telecommunication, power for refrigeration and so on.”

And remember, this does not require an attack by a foreign power.  A gigantic solar storm could cause an event like this at literally any time.  According to a recent WND article, it is estimated that it would take four to ten years to recover from a direct hit from a massive solar storm…

If the earth is hit by a direct solar flare, some of which can be 14 times the size of the earth, scientists from NASA and the National Academy of Sciences say it would cost the nation alone up to $2 trillion in the first year. It could take four to 10 years to recover and affect 90 percent of the U.S. population, meaning widespread starvation and death.

So what would life look like for you and your family if this happened?

-There would be no heat for your home.

-Water would no longer be pumped into most homes.

-Your computer would not work.

-There would be no Internet.

-Your phones would not work.

-There would be no television.

-There would be no radio.

-ATM machines would be shut down.

-There would be no banking.

-Your debit cards and credit cards would not work.

-Without electricity, gas stations would not be functioning.

-Most people would be unable to do their jobs without electricity and employment would collapse.

-Commerce would be brought to a standstill.

-Hospitals would not be able to function.

-You would quickly start running out of medicine.

-All refrigeration would shut down and frozen foods in our homes and supermarkets would start to go bad.

-Some vehicles would no longer be able to start at all.

-Traffic lights would no longer be working.

-Airplanes would not be able to go anywhere.

-Wall Street would not be able to function at all.

A lot of these effects would start to be felt immediately.  An article by Mac Slavo detailed some of the things that we could expect to see in the immediate aftermath of a massive EMP blast…

The first 24 – 48 hours after such an occurrence will lead to confusion among the general population as traditional news acquisition sources like television, radio and cell phone networks will be non-functional.

Within a matter of days, once people realize the power might not be coming back on and grocery store shelves start emptying, the entire system will begin to delve into chaos.

Within 30 days a mass die off will have begun as food supplies dwindle, looters and gangs turn to violent extremes, medicine can’t be restocked and water pump stations fail.

So what is the federal government doing to protect us against such a horrific disaster?

In fact, according to a recent WND article, ex-CIA Director Michael Hayden says that the Obama administration has no plans to defend us against an EMP blast…

Contrary to the findings of a 2008 commission mandated by Congress to consider a defense against an electromagnetic pulse attack and its effects on the national grid, a retired Air Force general who also headed the National Security Agency and the Central Intelligence Agency says that there isn’t a solution to an EMP attack.

Speaking before the Bipartisan Policy Center at a conference on the threats to the U.S. electrical grid, Michael Hayden also said the Obama administration has no plan to defend against an EMP.

In fact, Hayden says that “there really aren’t any solutions” to this problem…

“I don’t mean to be so flippant, but there really aren’t any solutions to this, so I would just leave it at that,” Hayden said.

Of course that is a complete and total lie.  It would take less than a billion dollars to protect the largest transformers in our electrical grid.  But the Obama administration refuses to do it.

Since the Obama administration is doing nothing, some state government officials are now considering taking action…

At the National Council of State Legislatures last week in Atlanta, a number of lawmakers said they’re preparing legislation similar to a bill introduced in Maine recently did under the leadership of Rep. Andrea Boland.

Efforts are under way to press the membership of the NCSL to address the EMP issue, since the federal government has failed to take action to mitigate the potential for a catastrophic event, whether natural or man-made. An EMP event could knock out the U.S. electrical grid system and the critical infrastructures that rely on it.

Along with the national electrical grid, other critical infrastructures include telecommunications, banking and financial transactions, oil and natural gas pipelines, transportation, food and water delivery, emergency services and space systems.

In short, an EMP event could cause the collapse of society.

And without a doubt, our electrical grid represents the “soft underbelly” of U.S. infrastructure.  Attacks on the electrical grid happen all the time, but most of them are not reported by the mainstream media.  The following report of an attack is from a recent Forbes article…

More than 10,000 people in Arkansas were dumped into a blackout Sunday following an attack on that state’s electric grid, the FBI said today, the third such attack in recent weeks. In August, a major transmission line in the region, around Cabot, Ark., was deliberately cut.

The FBI said that two power poles had been intentionally cut in Lonoke County on Sunday, resulting in the outage.

The following is how the FBI described the attack…

In the early morning hours of September 29, 2013, officials with Entergy Arkansas reported a fire at its Keo substation located on Arkansas Highway 165 between Scott and England in Lonoke County. Fortunately, there were no injuries and no reported power outages. Investigation has determined that the fire, which consumed the control house at the substation, was intentionally set. The person or persons responsible for this incident inscribed a message on a metal control panel outside the substation which reads, ‘YOU SHOULD HAVE EXPECTED U.S.’

But minor attacks like that are nothing compared to what an EMP weapon could potentially do to our electrical grid.

And our strategic enemies have been working on developing such weapons.  The following is a short excerpt from a statement by Dr. Peter Vincent Pry to the United States Senate Subcommittee on Terrorism, Technology and Homeland Security on March 8th, 2005…

But it is not just Russia and China that we need to be worried about.

According to Pry, North Korea also has such weapons…

Pry pointed out that South Korean military intelligence has warned not only their government but also the U.S. that North Korea is developing super-EMP warheads with Russian help.

And it should be noted that it is very possible to create a devastating EMP burst without exploding a nuke high up in the atmosphere.  In fact, the U.S. and other nations have been very busy working on such weapons.  For example, the U.S. military has reportedly developed “a directed electromagnetic pulse gun” that can take out all electronics within a limited area.  This kind of EMP weapon can be fired from a plane, a cruise missile or even a drone.  The following is how this class of weapon was described in a WND article…

A pre-programmed cruise missile not too different from a drone has been proven to be capable of blasting out an EMP-type microwave that was able to destroy personal computers and electrical systems inside a building over which it was flying.

The U.S. Air Force and its contractor Boeing have created the High-powered Microwave Advanced Missile Project, or CHAMP, which was just tested over a Utah desert.

In addition, “radio frequency weapons” are so simple that terror groups or even “lone wolf crazies” could easily build them and use them.  The following is from an article by F. Michael Maloof…

Such an individual with a penchant for electronics can pull together components from a Radio Shack or electronic store – even order the components off of selected Internet websites – and fashion a radio frequency, or RF, weapon.

As microprocessors become smaller but more sophisticated, they are even more susceptible to an RF pulse. The high power microwave from an RF weapon produces a short, very high power pulse, said to be billions of watts in a nanosecond, or billionths of a second.

This so-called burst of electromagnetic waves in the gigahertz microwave frequency band can melt electrical circuitry and damage integrated circuits, causing them to fail.

Constructing a radio frequency weapon is not difficult at all.  In fact, you can find instructions for how to build them on the Internet.

In the future, electromagnetic weapons are going to become even more powerful and even easier to use.

Meanwhile, we are going to continue to become even more dependent on electricity and technology.

And of course even if there is never a major EMP attack against the United States, scientists tell us that it is only a matter of time before a massive solar storm fries the electrical grid.

I hope that you are getting ready while you still can. 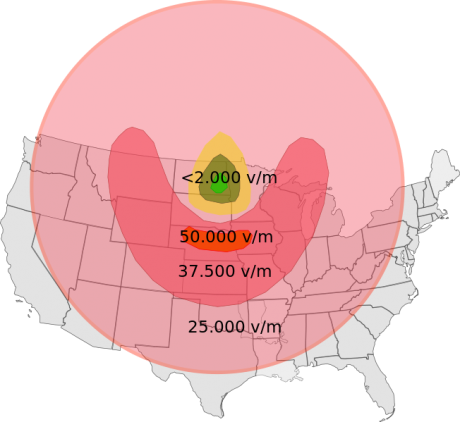