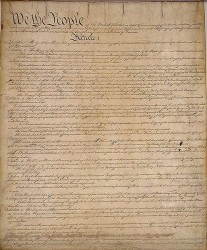 In the United States today, it is becoming increasingly fashionable to openly trash the U.S. Constitution.  Many among the elite are not even trying to hide how much they hate the U.S. Constitution anymore.  As the Patriot movement and the Tea Party movement call for a return to the principles that this nation was founded upon, many among the elite and in the mainstream media are responding by publicly dumping on the U.S. Constitution.  The level of vitriol that we are seeing for our founding fathers and for our Constitution is unprecedented.  It turns out that the U.S. Constitution does not fit very well with the benevolent futuristic “Big Brother” totalitarianism that they want to impose on all of us.  All of that talk about “freedom” and “liberty” in the Constitution does not exactly square with the centralized global planning that the elite have in mind.  The ruling elite believe that the “rights of the individual” must be greatly restricted for the “good of society” and for the “good of the environment”.  Right now the “constitutional revival” that is happening in the United States is a direct threat to what the elite are trying to accomplish, so they are responding by openly attacking the Constitution.

At more than 90 percent of the law schools in the United States today, the U.S. Constitution is portrayed as a hopelessly outdated document that is in desperate need of revision or it is portrayed as a “living, breathing document” that we are free to alter as society “progresses”.  In law schools across the country, law students are being taught that our founding fathers were racist, sexist, homophobic bigots that did the best that they could at the time.

Keep in mind that a very large percentage of our politicians and all of our judges go through these law schools.  I personally sat in law school classes and listened to law professors trash the U.S. Constitution.  This is really happening.

But these days it is apparently not enough to just poison the minds of law students.

Now the mainstream media is launching a major attack on the U.S. Constitution.

The latest issue of Time Magazine, the number one political magazine in the United States, has a picture of a half-shredded U.S. Constitution on the cover with the words “Does It Still Matter?” emblazoned across it.

This front page article was authored by Richard Stengel and unfortunately the article is not a defense of the U.S. Constitution.

Rather, Stengel insists in his article that the U.S. Constitution “must accommodate each new generation and circumstance.”

That is exactly the kind of thing that is constantly being pushed down the throats of law school students all over the country.  Stengel also declares in his article that we must not allow the Constitution to be “an obstacle” that will keep us from making the “progress” that we need to make as a society….

“We can pat ourselves on the back about the past 223 years, but we cannot let the Constitution become an obstacle to the U.S.’s moving into the future with a sensible health care system, a globalized economy, an evolving sense of civil and political rights.“

This is typical of what the elite will do.  They will applaud the Constitution as being a good document “for the past” but then they will talk about how we “need to move forward” because people are so much smarter now than they were back then.

The reality is that many elitists love to denigrate the circumstances under which the Constitution was drafted and they love to talk about how much more “sophisticated” we are today.

In an article entitled “Is It Time To Update The U.S. Constitution?” CNN’s Fareed Zakaria recently declared that it was time to reexamine our founding document that was created in a “cramped room” that had “shades drawn over the windows”….

By contrast, any talk of revising or revisiting the U.S. Constitution is, of course, seen as heresy. The United States Constitution was, as you know, drafted in a cramped room in Philadelphia in 1787 with shades drawn over the windows. It was signed by 39 people.

But Zakaria was kind compared to a lot of the other pundits out there.

On an ABC News political talk show over the weekend, Georgetown professor Michael Eric Dyson declared that there are “some gaps, some holes, lacunas, gulfs, abysses” in the Constitution and he went on to make the following statement….

Do you know why elitists love to talk about the Constitution being a “living” document?

It is because they feel like they have permission to change and “reinterpret” a document that is “living and breathing”.

Elitists love the idea that the U.S. Constitution “evolves”, and of course they believe that it is the role of the ruling elite to direct this “evolution”.

James Altucher, managing partner at Formula Capital, expressed his opinion of the U.S. Constitution in his recent article entitled “July 4th Is A Scam“….

Most importantly, lets not view the Constitution as gospel. Countries, people, systems, technology evolves. As they do, its important to see what from the past is good and what can be discarded.

What can be “discarded”?

But there are others out there that go even farther in trashing the Constitution.

So far we have examined quotes from elitists that show at least a few shreds of respect for the Constitution.  They desperately want to change it and reinterpret it, but at least they acknowledge that is has played a beneficial role in American history.

There are others among the elite that are not afraid to openly declare hate for the U.S. Constitution.

For example, Michael Klarman of Harvard University Law School delivered a Constitution Day lecture at Johns Hopkins University last September 16th. His lecture was entitled “A Skeptical View of Constitution Worship“, and it was a blistering assault on the U.S. Constitution.

Klarman made four major points about “constitutional idolatry” in his speech….

I have four points I want to make today against constitutional idolatry, which is my label for our misguided tendency to blindly worship the Constitution, giving it credit for all the things we love and honor about our country.

(1) The Framers’ constitution, to a large degree, represented values we should abhor or at least reject today.

(2) There are parts of the Constitution with which we are still stuck today even though we would never freely choose them and they are impossible to defend based on contemporary values.

(3) For the most part, the Constitution is irrelevant to the current political design of our nation.

(4) The rights protections we do enjoy today, the importance of which I do not minimize, are mostly a function of political and social mores, which have dramatically evolved over time and owe relatively little to courts using the Constitution to protect them.

Remember, this is not some nutjob that was making this speech.

This was a professor of law at Harvard University.

Barack Obama went to the law school at Harvard University.  Hordes of our future politicians and judges and law professors go through that place.

Klarman is not someone to be taken lightly.

Klarman’s remarks were noticed over at The Economist.  It is an open secret that The Economist is a mouthpiece for the global banking elite and they were quite taken with what Klarman had to say.  They published an article supporting Klarman’s ideas that was entitled “The Perils Of Constitution-Worship”.

In that article, those who love and support the U.S. Constitution were described as “infantile”….

Indeed, there is something infantile in the belief of the constitution-worshippers that the complex political arguments of today can be settled by simple fidelity to a document written in the 18th century.

The stakes are incredibly high.  Just consider what Alex Jones has to say about the matter in the video posted below….

So will you stand up for the U.S. Constitution?

Great tests for this nation are coming.  We are standing right on the verge of the economic collapse of America, and that will be a great time of challenge for the United States.  Our loyalty to the Constitution will be pressed to the limit as society descends into anarchy.

In fact, this very attitude was clearly expressed in the Time Magazine article mentioned above….

The inference, of course, is that once we have made enough “progress” we will be able to toss aside the U.S. Constitution like some sort of used rag.

Well, the reality is that there are tens of millions of red-blooded Americans that are not ready to give up on the U.S. Constitution.

If you are an American that still believes in liberty and freedom, don’t be afraid to let your voice be heard, because if none of us stand up the America that so many of us grew up loving will soon cease to exist.