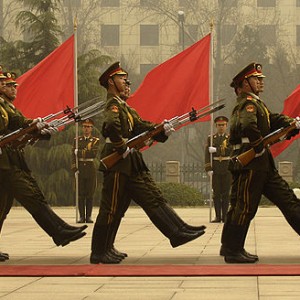 Most Americans assume that the U.S. military is so vastly superior to everyone else that no other nation would ever dream of fighting a full-scale war against us.  Unfortunately, that assumption is dead wrong.  In recent years, the once mammoth technological gap between the U.S. military and the Chinese military has been closing at a frightening pace.  China has been accomplishing this by brazenly stealing our technology and hacking into our computer systems.  The Pentagon and the Obama administration know all about this, but they don’t do anything about it.  Perhaps the fact that China owns about a trillion dollars of our national debt has something to do with that.  In any event, today China has the largest military in the world and the second largest military budget in the world.  They have stolen plans for our most advanced jets, helicopters, ships and missile systems.  It is estimated that stealing our technology has saved China about 25 years of research and development.  In addition, China is rapidly developing a new generation of strategic weapons that could potentially enable it to actually win a future war against the United States.  At one time such a notion would have been unthinkable, but as you will see below, the next war with China could go very badly for the United States.

The Washington Post is reporting on a confidential report that was prepared for the Pentagon, and what this report says about the extent of Chinese cyber espionage is absolutely startling.  Will China know ALL of our secrets at some point?  The following is a brief excerpt from the Washington Post article about the theft of our military technology by China.  It turns out that Chinese hackers have gotten their hands on plans for almost all of the new cutting edge weapons systems that we have been developing…

Some of the weapons form the backbone of the Pentagon’s regional missile defense for Asia, Europe and the Persian Gulf. The designs included those for the advanced Patriot missile system, known as PAC-3; an Army system for shooting down ballistic missiles, known as the Terminal High Altitude Area Defense, or THAAD; and the Navy’s Aegis ballistic-missile defense system.

Also identified in the report are vital combat aircraft and ships, including the F/A-18 fighter jet, the V-22 Osprey, the Black Hawk helicopter and the Navy’s new Littoral Combat Ship, which is designed to patrol waters close to shore.

Also on the list is the most expensive weapons system ever built — the F-35 Joint Strike Fighter, which is on track to cost about $1.4 trillion.

“That’s staggering,” said Mark Stokes, executive director of the Project 2049 Institute, a think tank that focuses on Asia security issues. “These are all very critical weapons systems, critical to our national security. When I hear this in totality, it’s breathtaking.”

The experts said the cybertheft creates three major problems. First, access to advanced U.S. designs gives China an immediate operational edge that could be exploited in a conflict. Second, it accelerates China’s acquisition of advanced military technology and saves billions in development costs. And third, the U.S. designs can be used to benefit China’s own defense industry. There are long-standing suspicions that China’s theft of designs for the F-35 fighter allowed Beijing to develop its version much faster.

But it isn’t just hackers that the U.S. military needs to be concerned about.

The truth is that the Chinese are stealing secrets from us any way that they can.

For example, the Chinese use attractive young women to seduce our defense contractors.  In fact, as the Washington Times recently reported, one 59-year-old American man was recently charged with passing very sensitive secrets to a 27-year-old Chinese “honeypot” that he was seeing…

A U.S. defense contractor who works in intelligence at the military’s Pacific Command in Hawaii has been charged with passing classified national security information to a 27-year-old Chinese woman he was dating.

Benjamin Pierce Bishop, 59, is accused of sending the woman an email in May with information on Pacom’s war plans, nuclear weapons and U.S. relations with international partners, according to the complaint filed in U.S. District Court in Honolulu and unsealed Monday.

The complaint goes on to allege that Mr. Bishop told the woman over the telephone in September about the deployment of U.S. nuclear weapons and about the ability of the U.S. to detect other nations’ short- and medium-range ballistic missiles.

Another way that China is gaining a strategic advantage over the U.S. is by getting the U.S. military to become increasingly dependent upon them.  According to Forbes, now the U.S. military is even leasing a Chinese satellite for communications purposes…

American dependence on China grows by the day. The latest news is that the United States has been reduced to leasing a Chinese satellite to handle communications with U.S. military bases in Africa. Surprising, isn’t it? The nation that launched the world’s first communications satellite (I remember it well – it was called Telstar) has so lost its manufacturing mojo that it has to rely on its most formidable military adversary to provide the hardware for some of its most sensitive communications. This at a time when underlying unemployment rates among U.S. manufacturing workers remain at near-depression levels.

The investigation found 1,800 cases of counterfeit electronic parts involving over one million suspect parts in 2009-10 alone, thereby exposing “a defense supply chain that relies on hundreds of unveiled independent distributors to supply electronic parts for some of our most sensitive systems.”

The report concluded, among other things, that China is the “dominant source” of counterfeit products that enter the DoD supply chain, that the Chinese government does little to stop it and that the DoD doesn’t know the “scope and impact” of these parts on critical defense systems.

Who in the world would be stupid enough to allow one of their greatest strategic enemies to supply large numbers of parts for key weapons systems?

Apparently we are that stupid.

Things are particularly bad when it comes to semiconductors…

Senator John McCain commented: “We can’t tolerate the risk of a ballistic missile interceptor failing to hit its target, a helicopter pilot unable to fire his missiles, or any other mission failure because of a counterfeit part.” Calling the issue “a ticking time bomb,” Brian Toohey, president of the Semiconductor Industry Association, commented: “The catastrophic failure risk inherently found in counterfeit semiconductors places our citizens and military personnel in unreasonable peril.”

That may sound crazy, but unfortunately Trojan Horse chips can be extremely difficult to detect.  The following is from a recent Forbes article…

As the Defense Science Board pointed out, Trojan Horse circuitry is almost impossible to detect even with the most rigorous analysis. This is particularly so if a saboteur can accomplish matching subversions in both software and relevant hardware.

And as I mentioned above, China is rapidly developing a vast array of new strategic weapons which may enable it to actually win the next war with the United States.

For example, China has been developing a new generation of inter-continental and submarine-launched nuclear missiles.

The submarine-launched missiles are of particular concern…

It’s a closely held secret, and details are sketchy. If it lives up to what public military intelligence says it is, it’s a huge get for China, especially with their new sub fleet.

The missile is believed to have a range of 8,000 km, and can carry conventional or nuclear warheads.

Do you remember a few years ago when a Chinese sub fired a missile from just off the west coast of the United States?

We didn’t know that the sub was there.  If that missile had been fired at Los Angeles it would have been destroyed long before we could have ever responded.

And don’t think that a first strike by either China or Russia is inconceivable.  As I have written about previously, the U.S. strategic nuclear arsenal has already been reduced by about 95 percent, and Obama seems absolutely determined to whittle it down even more.  In fact, there has been talk that the Obama administration ultimately wants to reduce our arsenal down to just 300 warheads.  If Russia or China knows exactly where those warheads are, it would be very easy to take them out in less than 10 minutes with a submarine-based first strike.

And China has also reportedly been developing very sophisticated EMP weapons.  The following is from a WND report…

In 2011, it was first revealed that China was developing EMP weapons to be used against U.S. aircraft carriers in any future conflict, especially over Taiwan, according to a 2005 National Ground Intelligence Center study.

That center study said the Chinese were developing a family, or “assassin’s mace” of EMP and high-powered microwave, or HPM, weapons to be used by a technologically inferior force such as China’s, against U.S. military forces.

The once secret but now declassified study pointed out that the Chinese could detonate an EMP weapon some 30 to 40 kilometers over Taiwan or – by inference – a U.S. carrier strike group – and destroy the electronics capability on which U.S. network-centric strategy depends.

But an EMP weapon does not have to be a high-altitude weapon that affects a large area.  Smaller scale EMP weapons could take out a wave of fighter jets or a carrier fleet.

In a future conflict with China, we could see U.S. planes falling out of the sky or great naval vessels sitting dead in the water after being hit with EMP blasts.

But isn’t China our friend?

That is what most Americans and most American politicians seem to believe.  They seem to think that China is our “buddy” and “trading partner” and that we will never have a military conflict with China.

But that is NOT how the Chinese see things.

The Chinese regard the United States as their greatest strategic threat and as an enemy that needs to be vanquished.

That is why they are constantly spying on us, hacking into our computers and stealing our technology.

That is why they are feverishly building up their military and preparing for a future war with America.

Do you believe that war with China is in our future?

If so, do you think that we will win?