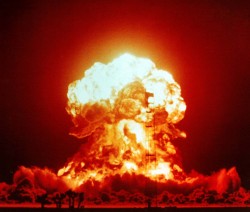 The following is an RT video news report about these new shelters….

But it isn’t just Russia that has been busy building bomb shelters.

A few years ago, Shanghai’s Civil Defense Office announced the completion of an absolutely massive underground shelter.  It was reported that the shelter covers an area of over 90,000 square meters and could accommodate up to 200,000 people at a time.

So what about the U.S. government?  Are they building any bomb shelters for us?

Basically, Americans are sitting ducks.  Whether it is a rogue nation launching a nuke or a full-out nuclear war, Americans literally have nowhere to go.  In the event of a nuclear attack, most of us would be lucky to have enough time to duck and cover and say our prayers.

The sad truth is that the U.S. government considers the threat of nuclear war to be a thing of the past.

Today, the United States has only 5,113 nuclear warheads in its stockpile, which represents an 84 percent decline since a peak of approximately 31,255 in 1967.

But that isn’t far enough for Barack Obama.  Currently, Obama is working on a treaty under which the United States and Russia would only be allowed a maximum of 1,550 deployed warheads.

So with nuclear weapons rapidly spreading throughout the world, and with the U.S. only having a small fraction of the nukes that it used to have, doesn’t that make a nuclear strike against the United States more likely?

Of course, but because the mainstream media tells Americans that we don’t have to worry about nuclear war anymore most of them don’t even think about it.

But Russia is obviously taking a different approach.  Building 5000 bomb shelters in one city alone is a massive undertaking.  Obviously they feel like building all of these shelters is important for one reason or another.

So are they just being paranoid or are they several moves ahead of us?