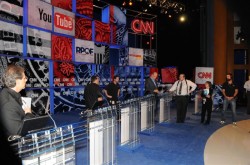 Considering the fact that no real votes will be cast until next year and considering the fact that the polls are constantly changing, shouldn’t all of the candidates participating in the Republican debates be given roughly the same amount of time to talk?  After all, what kind of a “debate” is it when certain candidates are given double (or sometimes even triple) the amount of talking time?  Why is it that Rick Perry and Mitt Romney have been getting about twice as much talking time as the other candidates during the Republican debates?  It is amazing that more people are not calling into question the credibility of these “debates”.  Whether you support one of the Republican candidates or not, we should all be able to agree that one of the goals for these debates should be to treat the candidates as fairly and evenly as possible.  Unfortunately, as the numbers you are about to see indicate, that is definitely not happening.

According to blogger Wes Hemings, the following is how much talking time each candidate received during the last Republican debate….

So was it just Fox News that was so slanted?

What has happened at other recent Republican debates?

Well, Hemmings also analyzed the distribution of talking time during the recent Republican debate on CNN….

Wow – that debate certainly did not seem fair either.

Hemmings also broke down the talking time allotted to each candidate during the recent MSNBC debate….

In all three debates, Rick Perry and Mitt Romney received far more talking time than any of the other candidates.  They are always positioned at center stage and the attention never stays away from those two for very long.

These debates reinforce the perception that none of the other candidates even has a chance.  For example, a recent USA Today article entitled “GOP debates signal a race between Romney and Perry” made the following statement….

The debates have bolstered what most polls of the Republican race have shown; it’s a two-man race between Perry and Romney.

There is something fundamentally un-American about what has been going on in these debates.  How is our choice of candidates supposed to be legitimate when two candidates keep getting pushed to the front?

Another thing that the numbers above reveal is a significant bias in favor of “establishment candidates” on the part of those running the debates.

Okay, if they want to give Perry and Romney extra time because they are leading in the polls, then why don’t those rules apply to all the other candidates?  For example, Jon Huntsman (an establishment candidate) has been averaging 1.2% support in recent polls.  Yet Huntsman received more talking time than any of the other “second tier” candidates in the last debate.  In fact, he received more than 50% more talking time than some of them.

Herman Cain is currently getting more than 4 times the support in the polls that Jon Huntsman is getting, and yet Huntsman has been given significantly more talking time during each of the recent Republican debates.

So why is Huntsman getting so much talking time?

He barely even registers in the polls.

What in the world is going on?

It seems as though there is a less than subtle attempt by the mainstream media to feature establishment candidates such as Rick Perry, Mitt Romney and John Huntsman.  But if any of them is actually elected, things will continue to run pretty much the same way that they did under Barack Obama, George W. Bush and Bill Clinton.

No matter who we seem to elect, not much seems to change.  We could really use some fresh thinking in the White House, and yet the mainstream media continues to push establishment candidates into our faces.

The favoritism for Rick Perry and Mitt Romney has become so obvious that even Saturday Night Live is making jokes about the fact that none of the other candidates seem to have a shot at winning.  You can see video of the Saturday Night Live spoof of the recent Republican debates right here.

No real votes are going to be cast for Republican candidates until next February.  What would be the harm in giving each of the candidates an equal number of questions and a roughly equal amount of time to express their views?

I was deeply insulted by how Fox News, CNN and MSNBC handled the recent debates.  It should be obvious to any thinking human being that Perry and Romney are being favored.  Republican voters are being highly manipulated and it is disgusting.

Even if you support Perry, Romney or Huntsman, you should still be in favor of fair and balanced debates.

Is there anyone out there that is able to defend the shameful favoritism that is going on?

If so, please step up to the plate.