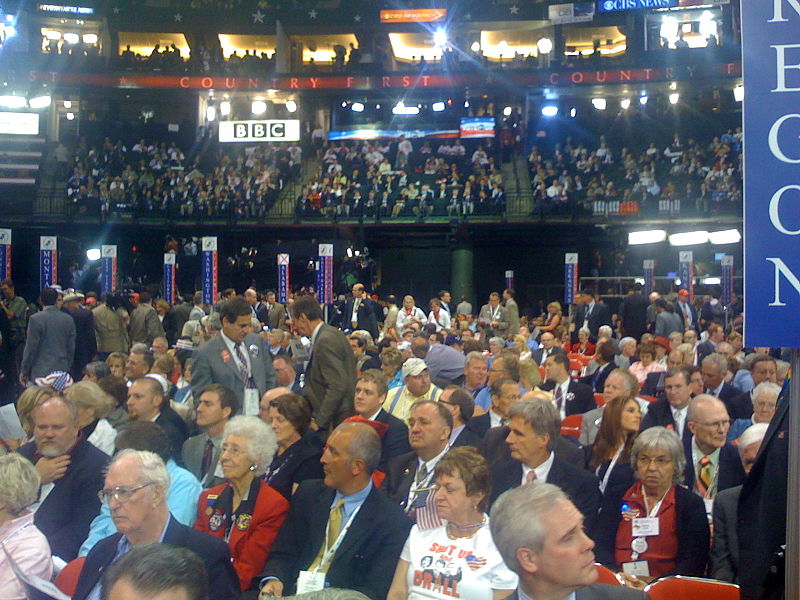 2016 is turning out to be the strangest election season that we have seen in decades, and it may soon get far stranger.  At this point, most people assume that Donald Trump is going to be the Republican nominee, and without a doubt he has had a tremendous amount of success.  But because most of the states so far have apportioned delegates proportionally, Trump only has 44.8 percent of the delegates that have been awarded up to this point.  So Trump is going to have to do significantly better through the rest of the process in order to get to the magic number of 1,237 delegates, especially since not all of the delegates are awarded through the primaries and caucuses.  As Real Clear Politics has detailed, every state “is awarded so-called ‘RNC delegates,’ who are party officials with automatic credentials to the convention“.

Right now, more than 40 percent of all the delegates to the convention have already been awarded, and Trump is sitting at just 458.  To get to 1,237, he is going to have to do really well in the upcoming winner-take-all states.  That is why there is so much focus on Florida and Ohio on March 15th.  If Trump wins both of them, he will have a path to 1,237 delegates.  If he doesn’t, that is where things get tricky.

If Donald Trump shows up at the convention with fewer than 1,237 delegates, he will be vulnerable, and it is likely that the Republican establishment will try to steal the nomination away from him.

In order for that to happen, the rules of the convention will need to be changed.  Because right now the only candidates that are likely to be nominated under the current rules are Donald Trump and Ted Cruz.

Morton Blackwell, a member of the Republican National Committee’s Standing Committee on Rules, authored a great article entitled “The Coming Trainwreck” in which he described what a mess the Republican convention rules are as of this moment.  The following is a brief excerpt in which he describes what would happen if no candidate received 1,237 votes on the first ballot…

First, a sizeable number of delegate votes cast will not be counted in the final tally of the first ballot because they will be cast for candidates who did not demonstrate, before the first ballot, that they had majorities in at least eight state delegations.

Second, the national rules provide that no one will get the presidential nomination on any ballot until someone receives at least 1,237 tallied delegate votes.

Third (and this will come as a surprise to most people), although delegate votes from states that hold primaries will be allocated by those state primaries to specific candidates on the first ballot, that does not mean that on subsequent ballots all delegates are free to vote for whomever they choose and to have those votes counted in a final tally on any ballot.

In fact, the state of Florida binds their delegates for the first three ballots.  Rules vary from state to state, and I am sure that we are going to hear a lot more about this if nobody has 1,237 delegates before the convention.

As the rules stand right now, no other candidates other than Trump or Cruz will even be able to be nominated at the convention because of a rule that the Mitt Romney campaign pushed for in 2012.  That rule requires that a candidate must have won at least eight states in order to be nominated.  Here is more from Morton Blackwell…

In fact, as it now stands, the same Romney-created rule, Rule 40(b), that prevents votes from being tallied for candidates who could not prove majority support from at least eight state delegations also provides that candidates must prove that they meet the eight-state threshold “not less than one (1) hour prior to the placing of the names of candidates for nomination pursuant to this rule and the established order of business.” In other words, when the first ballot begins, no additional candidates can qualify to receive votes that will be counted.

Of course these rules can still be changed.

In fact, they can be changed just shortly before the convention.

The Rules Committee is immensely powerful.  According to Time Magazine, they could very easily create a rule that says that “only candidates with blue hair” can be nominated, and nobody would be able to do anything about it.

So could they change the rules specifically to try to steal the nomination from Trump?

Of course they could.  In fact, new rules are already being proposed.  The following comes from the Daily Caller…

A Republican National Committee member will propose an amendment to the GOP convention rules this summer that will allow any Republican candidate with at least one delegate to be “deemed” nominated on the first ballot.

“So, using Iowa as an example, every candidate receiving at least four percent of the vote in the Iowa caucuses will earn one delegate, and thus be nominated for consideration at the Republican National Convention,” North Dakota National Committeeman Curly Haugland, a member of the RNC Rules Committee, told The Daily Caller Tuesday.

It is interesting to note that if this new rule is implemented, the names that would be nominated on the first ballot would include Donald Trump, Ted Cruz, Marco Rubio, John Kasich, Chris Christie, Ben Carson, Rand Paul and Jeb Bush.

And it is also interesting to note that Karl Rove is now running around the country trying to rally establishment Republicans around an attempt to keep Donald Trump from getting to the magic number of 1,237.  The following comes from WND…

At a meeting of Republican governors and donors in Washington, D.C., last month, Rove – dubbed the “architect” of George W. Bush’s election success – launched a movement to prevent Donald Trump from gaining the 1,237 delegates he needs in the primaries to win the GOP nomination on the first ballot at the party’s convention in Cleveland in July.

The Republican establishment has a very deep playbook full of dirty tricks.  Just look at what they have done to the Ohio ballot.  I am a former lawyer, and I can’t even figure it out.

As I have said all along, the elite are going to move heaven and earth to keep Donald Trump out of the White House, and if that requires stealing the nomination from him at the convention, then that is exactly what they are going to do.

Of course if that happens there will be a massive uproar.  Perhaps that is why the Cleveland police are stocking up on riot gear in anticipation of what is going to happen at the Republican convention.

Let us hope that the nomination is clinched ahead of time.  Because a “brokered convention” would be a giant mess, and it would almost certainly hand the election to Hillary Clinton, and that is the worst possible outcome of all.