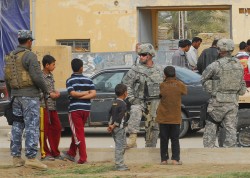 Today, the United States has become the police of the world.  The U.S. military has a total of over 700 military bases in 130 countries around the world.  Total military spending by the U.S. government is nearly equal to the combined military spending of the rest of the globe.  Meanwhile, the federal government is literally drowning in debt.  So if we make some significant cuts to military spending will we fix the national debt problem?  Of course not.  In fact, it would only put a small dent in it.  But at least it would help.  The truth is that we cannot afford to be the police of the world and the Pentagon wastes so much money that it is almost incomprehensible.  Secretary of Defense Donald Rumsfeld once publicly admitted that the Pentagon lost track of 2.3 trillion dollars and cannot tell us how it was spent.  Just imagine how your boss would react if you lost track of just 2.3 thousand dollars.  So why wasn’t there more of an uproar about losing track of 2.3 trillion dollars?  Have we become so accustomed to military waste that we don’t even care anymore?

But you know what?  The U.S. military is spread so thin right now that they could not even respond adequately if a real threat did emerge.  Trying to be the police of the world is not only incredibly costly, it is also strategic suicide.

What possible justification could there possibly be for having U.S. troops in 130 different nations?

Why in the world do we still need huge contingents of troops in Germany and Japan?  It is funny when people talk about us pulling out of Afghanistan or Iraq, because we never even pulled out of Germany or Japan after World War II.  Once the U.S. military gets boots on the ground somewhere, they very rarely ever leave.

Look, it is about darn time that nations like Japan and Germany learned to defend themselves.  Nobody is going to invade them any time soon.  Everyone knows they are protected by U.S. nukes.  So why do we have to station so many troops in both countries?

We are spending so many resources patrolling the streets of Iraq and rounding up goat herders in Afghanistan that we aren’t even preparing ourselves for the real threats.  If World War III does break out in the coming years, it is probably going to be the United States against an allied front of Russia and China.  But we aren’t preparing to fight that war.  Instead, Bush and Obama have been slashing our nuclear arsenal to the bone as they obsessively hunt for “boogeymen” in the caves of the Middle East.

So in our attempt to police the world, we are spending way too much money, our military is stretched far too thin and we aren’t even preparing to fight our real threats.

The truth is that U.S. military spending is totally out of control.  The following are 12 facts that show that we cannot afford to be the police of the world….

#1 Today the U.S. military has over 700 bases (some say it is actually over 1000 bases) in 130 different countries around the globe.  It is estimated that it costs about $100 billion a year to maintain these bases.

#3 However, when you throw in all “off budget” items and other categories of “defense” spending not covered in the Pentagon budget you get a grand total of somewhere between $1.01 and $1.35 trillion spent on national defense in 2010.

#6 The Pentagon currently gobbles up 56 percent of all discretionary spending by the federal government.

#7 Together, the wars in Iraq and Afghanistan cost more than $150 billion a year.

#8 Up to this point, it is estimated that the U.S. government has spent over 373 billion dollars on the war in Afghanistan.

#9 Up to this point, it is estimated the the U.S. government has spent over 745 billion dollars on the war in Iraq.

#10 Since 2001, the total cost of the wars in Iraq and Afghanistan breaks down to $3,644 for every man, woman and child in the United States.

#11 The total price tag for each F-22 fighter jet is approximately $350 million.

#12 The Sustainable Defense Task Force has produced a report which shows that the U.S. could easily slash a trillion dollars from the defense budget over the next ten years.

But isn’t the U.S. the wealthiest nation in the world?

Can’t the U.S. government afford all of this military spending?

The truth is that the U.S. government has accumulated the biggest mountain of debt in the history of the world.

The U.S. national debt is 13 times larger than it was just 30 years ago.  We are literally drowning in red ink, and the farther you project things into the future, the more apocalyptic the financial outlook becomes.

We have become so addicted to debt that we have borrowed hundreds of billions of dollars from China, Russia and other strategic enemies in recent years – thus putting our national security at risk.

But establishment Democrats and establishment Republicans have both refused to take a stand on all this debt.  That is one of the reasons why so many Americans have been attracted to the Tea Party movement.

Unfortunately, we have now reached a point where an economic collapse seems virtually inevitable.  There is no way that we are going to be able to continue to police the world.  In fact, unless our military spending becomes far more efficient and far more focused on the real threats we may not even be able to protect our own nation when the time comes.

I have a feeling that the vast majority of my readers are going to disagree with something that they have read in this article.  That is okay – debate is healthy and is good for our country.  If you disagree with any of the points made above, please post a comment below and tell us what you think….