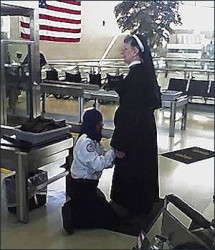 An amazing thing is happening.  Americans from every walk of life and from across the political spectrum are standing up and are saying “NO” to naked body scanners and TSA groping.  It isn’t as if we are against airport security.  For decades, the vast majority of us have been more than happy to walk through metal detectors in order to get on an airplane.  But when the government wants to look at our naked bodies and fondle our wives and our children that is just too much.  The truth is that these new “enhanced pat-downs” would be considered sexual assaults if they were committed out on the street.  Horror stories have been pouring in from airports across the United States and the American people have had enough.

But we still think that we live in “the land of the free”.

Fortunately, millions of Americans are starting to take a stand against this creeping fascism.

Geoff Freeman, an executive vice president for the U.S. Travel Association, says that the feedback that his organization has been receiving about these new “security procedures” has been overwhelmingly negative….

“We have received hundreds of e-mails and phone calls from travelers vowing to stop flying.”

“Are you less likely to fly because of stepped-up security procedures such as full-body scans and patdowns?”

So what was the response?

In New Jersey, some lawmakers are saying that the new body scanners and “enhanced pat-downs” violate New Jersey privacy laws and possibly even the U.S. Constitution.  They plan to introduce a resolution asking Congress to review these new security procedures.

Several pilots unions have come out and have strongly condemned the scanners and the pat-downs.  Even Sully Sullenberger has added his voice to those actively opposing these new “enhanced” security procedures.

Sibel Edmonds summed up the outrage that so many Americans are feeling when she recently wrote the following….

Unfortunately, the Secretary of the Department of Homeland Security, Janet Napolitano, is making it abundantly clear that the rest of us are simply going to have to get used to body scanners and “enhanced” pat-downs.  However, for the first time Napolitano is leaving open the possibility that “adjustments” may be made to the new security procedures….

“If there are adjustments we need to make to these procedures as we move forward, we have an open ear; we will listen.”

This is a critical juncture.  It will be fascinating to see who backs down first.  If the American people give in to this kind of treatment, then what is next?

The truth is that these airport scanners and “enhanced pat-downs” are completely dehumanizing.  Just check out what airport security officials are going to be doing to our wives and children from now on….

Even members of the mainstream media are absolutely horrified about what is going on.  According to CNN employee Rosemary Fitzpatrick, a TSA official ran her hands around her breasts, over her stomach, buttocks and her inner thighs, and even touched her most private areas when she recently went through airport security. The following is how Fitzpatrick described how she felt about the experience to CNN….

But if you want to get on a airplane in America today, this is the kind of thing you are going to have to go through.

Many of the organizations that are supposed to be looking out for our civil liberties are totally dropping the ball on this thing, but fortunately many ordinary Americans are stepping up and are fighting back.

One website, optoutday.com is calling for a “National Opt Out Day” on Wednesday, November 24th.  That is the busiest travel day of the year, and the idea is that airport security will be so swamped with opt outs that it will create a spectacle that will be absolutely unforgettable.  The following is a description of “National Opt Out Day” from the website….

It’s the day ordinary citizens stand up for their rights, stand up for liberty, and protest the federal government’s desire to virtually strip us naked or submit to an “enhanced pat-down” that touches people’s breasts and genitals. You should never have to explain to your children, ‘Remember that no stranger can touch or see your private area, unless it’s a government employee, then it’s OK.’

The goal of National Opt Out Day is to send a message to our lawmakers that we demand change. No naked body scanners, no government-approved groping. We have a right to privacy and buying a plane ticket should not mean that we’re guilty until proven innocent.

So what do Obama administration officials think about National Opt Out Day?

Well, a Reuters article noted that Janet Napolitano is far from pleased….

“I really regret that,” Napolitano said of the proposed boycott. “Our evaluation of the intelligence and risk indicated that we needed to move more quickly into the non-metal environment, to get liquids and powders and gels off of aircraft.”

Another grassroots website, wewontfly.com is encouraging Americans to quit flying altogether.  After all, if none of us fly, security officials will not have anyone to abuse.

But even if you never fly, there are things that all of us can do.  We can all swamp our representatives in Congress and various government agencies with massive quantities of emails and letters.  We can all post articles and videos about these issues all over the Internet.

I am a Flight Attendant for a major airline. I am currently out on disability because of a hip replacement. My husband (who is a pilot) and I flew out of Portland,Maine on November 9th, to New York for my 6 week follow up appointment. I had… my other hip replaced back in 2008 and totally know the entire procedure going through security. So I THOUGHT!

My husband waited for me on the opposite side through security with all of my belongings while I endured the “new” pat down procedure. I was asked by the female TSA agent if I wanted a private screening and I said no because I had did not expect what was about to happen.

When I came out of security my husband asked me. “What the hell was that?”. I have never felt so humiliated and violated. I have gone through the stages of being a sexual assault victim…Shock,Denial,Blame,Pain,Anger…I have yet to come with the Acceptance stage.

The bottom line here: We are ALL American citizens and should not be forced to succumb to a government agency that is clearly violating our Fourth Amendment!

This cannot be allowed to continue.  If we allow them to implement these procedures in our airports, pretty soon they will start popping up in subway stations, courthouses, sports stadiums and even at our workplaces.

If the American people will put up with “virtual strip searches” and the public fondling of our wives and our children by airport security officials, then what limits will be left?  Is there anything that we would not put up with just to feel a little bit safer?

What the TSA is trying to force on the American people is about as “un-American” as it gets.

Our liberties and freedoms are very precious things.  Once they are lost, they will be incredibly difficult to get back.  Don’t sit silently by as America gets turned into a Big Brother police state.