Under Barack Obama, the U.S. economy has performed worse than it did under any other president since the end of the Great Depression.  After every other recession since World War II, the U.S. economy always regained what was lost and got even stronger before the next recession began.  During this “economic recovery”, we have not even come close to getting back to where we were in 2008.  In fact, the number of Americans living in poverty and the number of Americans that are dependent on the government both continue to explode even as Barack Obama runs up trillions of dollars of new debt.  Anyone that believes that Barack Obama is going to “fix the economy” if he is given another four years in the White House has taken way too many sips of the Obama kool-aid.  The truth is that Barack Obama is not going to save you.  Barack Obama has royally messed up our economy (along with a lot of other things) and that is not something we should be thanking him for.

Yes, Barack Obama is not solely responsible for the economy.  In fact, he does not even have the most influence over the direction of the economy.

However, if he had been willing or able to actually do what was necessary to fix the economy, he certainly had ample opportunity.

For example, the Democrats had full control of Congress during Obama’s first two years in office.

They were in a position to push through just about anything that they wanted to.

But just about everything that did get through Congress during those two years was full of really, really bad ideas.

More importantly, Barack Obama has done absolutely nothing to stand in the way of the nightmarish policies of the Federal Reserve.

Yes, the Federal Reserve does have more power over the U.S. economy than Barack Obama does.

But Barack Obama has made no moves to reign in the Fed or to stop their idiotic policies.

In fact, Obama has had nothing but good things to say about Federal Reserve Chairman Ben Bernanke, and he nominated Bernanke for another term.

If you were the owner of a pro football team and your coach had lost every game for several years in a row would you give him a new contract?

But even though Federal Reserve Chairman Ben Bernanke has a track record of failure that would make the Washington Generals blush, Obama has given Bernanke his unquestioning support.

Obama insists that it would be a really bad idea to ever question the “independence” of the Fed.  Obama believes that it is a good thing that U.S. monetary policy is determined by a panel of “experts” that work for a secretive organization that has no direct accountability to the American people whatsoever.

Yet their decisions have a huge impact on all our lives every single day.

So since Barack Obama has steadfastly refused to stand up to the Federal Reserve and has had nothing but wonderful things to say about Federal Reserve Chairman Ben Bernanke, it is fair to hold Obama at least partially responsible for the nightmarish economic conditions that Fed policies have helped create.

In the final analysis, basically every single decision that Barack Obama has made regarding the economy has been wrong.  He has added trillions to our debt while flushing our economic future down the toilet at the same time.

Thanks Obama – you really have been awful.

The following are 24 stats that show just how much Obama has royally messed up our economy….

#2 Under Barack Obama, the velocity of money (a very important indicator of economic health) has plunged to a post-World War II low.

#6 Under Barack Obama, the United States has lost more than 300,000 education jobs.

#7 Since Barack Obama became president, the number of long-term unemployed Americans has risen from 2.7 million to 5.2 million.

#8 For the first time in the post-World War II era, the employment-population ratio has not bounced back after a recession.  The percentage of working age Americans with a job has been below 59 percent for 35 months in a row.

#9 While Barack Obama has been president, U.S. home values have fallen by another 12 percent.

#11 Electricity bills in the United States have risen faster than the overall rate of inflation for five years in a row.  Thanks Obama.

#13 Since 2008, our economy has lost 1.3 million jobs while at the same time 3.6 million more Americans have been added to Social Security’s disability insurance program.

#14 The number of Americans on food stamps has grown from 31.9 million when Barack Obama took office to 46.4 million today.  How much more “hope and change” are we going to be able to endure?

#15 As I wrote about the other day, it is being projected that Obamacare will add 16 million more Americans to the Medicaid rolls.

#16 If you can believe it (and this really is hard to believe), more than half of all Americans are now at least partially financially dependent on the government.

#17 The total amount of money that the federal government gives directly to the American people has grown by 32 percent since Barack Obama became president.

#18 Under Barack Obama, federal spending as a percentage of GDP (25 percent) is the highest that it has been since World War II.

#20 The U.S. government has run a budget deficit of well over a trillion dollars every single year under Barack Obama.

#21 Under Barack Obama, U.S. debt was downgraded from AAA status for the first time ever.

#22 Since Barack Obama took office, the U.S. national debt has increased by 50 percent.

#23 Since Barack Obama became president, the U.S. national debt has increased by an average of more than $64,000 per taxpayer.

#24 During the Obama administration, the U.S. national debt has grown more than it did from the time that George Washington became president to the beginning of Bill Clinton’s second term as president. 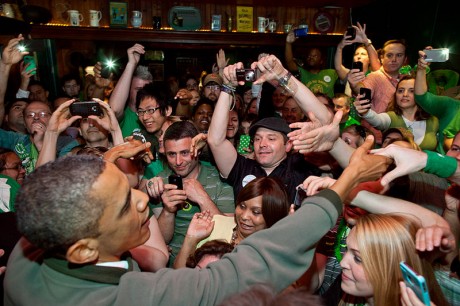