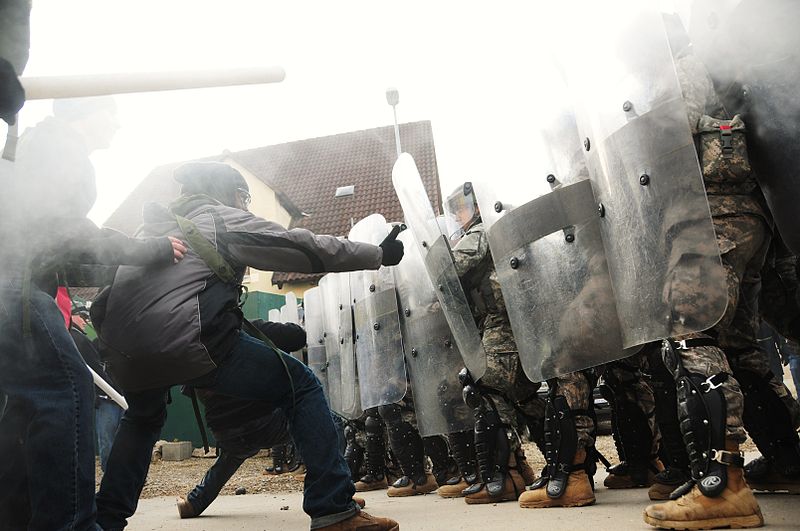 What in the world are the elite up to?  In recent days, we have learned that the New York Fed is moving a lot of operations to Chicago because of concerns about what a “natural disaster” could do, the federal government is buying 62 million rounds of ammunition commonly used in AR-15 semi-automatic rifles for “training” purposes, and NORAD is moving back into Cheyenne Mountain because it is “EMP-hardened”.  In addition, government authorities have scheduled a whole host of unusual “training exercises” all over the nation.  So are the elite doing all of this in order to prepare for something really BIG, or should we just chalk up all of this strange activity to rampant government paranoia?

The New York branch of the U.S. Federal Reserve, wary that a natural disaster or other eventuality could shut down its market operations as it approaches an interest rate hike, has added staff and bulked up its satellite office in Chicago.

Some market technicians have transferred from New York and others were hired at the office housed in the Chicago Fed, according to several people familiar with the build-out that began about two years ago, after Hurricane Sandy struck Manhattan.

Officials believe the Chicago staffers can now handle all of the market operations that are done daily out of the New York Fed, which is the U.S. central bank’s main conduit to Wall Street.

In all of U.S. history, there has never been a natural disaster in New York City that would have been bad enough to totally shut down the operations of the New York Fed for an extended period of time.

So why are they so concerned?

Well, I can think of one event that could cause such a disruption…

This is something that I wrote about in this article.  But other than that, it is hard to imagine a natural disaster which could shut down the New York Fed for an extended period of time.

Another very odd thing that we learned about this week is an absolutely massive purchase by the government of ammunition that is commonly used in AR-15 semi-automatic rifles.  The following comes from an article by Paul Joseph Watson…

The Department of Homeland Security is set to purchase over 62 million rounds of ammo typically used in AR-15 semi-automatic rifles, just weeks after the ATF was forced to back down on a ban on M855 bullets.

A posting on FedBizOpps.gov this week reveals that the DHS is looking to contract with a company to provide 12.6 million rounds of .223 Remington ammunition per year for a period of five years – totaling 62.5 million bullets.

The solicitation explains that the purchase is intended, “to achieve price savings over the current .223 Rem duty ammunition.” The bullets will be used by U.S. Customs and Border Protection agents nationwide for “training” purposes.

Why in the world would U.S. Customs and Border Protection agents nationwide need such a massive amount of ammunition for “training” purposes?

It shut down nearly ten years ago as the threat from Russia seemed to subside, but this week the Pentagon announced that Cheyenne Mountain will once again be home to the most advanced tracking and communications equipment in the United States military.

The shift to the Cheyenne Mountain base in Colorado is designed to safeguard the command’s sensitive sensors and servers from a potential electromagnetic pulse (EMP) attack, military officers said.

The Pentagon last week announced a $700 million contract with Raytheon Corporation to oversee the work for North American Aerospace Command (NORAD) and US Northern Command.

Admiral William Gortney, head of NORAD and Northern Command, said that ‘because of the very nature of the way that Cheyenne Mountain’s built, it’s EMP-hardened.’

So the U.S. military is concerned about an EMP attack all of a sudden?

Have they been reading The Economic Collapse Blog?

Spending 700 million dollars to move back inside a mountain just because it is “EMP-hardened” is a pretty big deal.

On top of everything else, we have been seeing lots of strange “training exercises” being scheduled all over the nation recently.

For example, the following is from a news story about one being held in Iowa…

This week you may notice extra emergency vehicles and public safety officers running around in tactical gear, Hazmat suits, and bomb suits. It’s a part of a statewide drill Des Moines is hosting Tuesday and Wednesday to prepare emergency personnel for dealing with weapons of mass destruction.

Brian O’Keefe with the Des Moines Fire Department said emergency officials in Iowa need to be prepared for anything.

“You know we’re number one seed producer with corn and soy, chicken embryo development, middle of the country heartland. So I’m sure all states access it. But we’re a target like any other large community,” said O’Keefe.

In addition, the U.S. military will be conducting some “unusual” training activity out in Arizona and California…

If you see some unusual helicopters overhead in the next couple of days, there’s nothing to worry about.

The I Marine Expeditionary Force G-7 will be conducting a Realistic Military Training this week, using the Prescott Municipal Airfield as a helicopter refueling point in order to facilitate a Long Range Raid at Camp Navajo, Arizona.

This Certification Exercise (CERTEX) is directed to be conducted from April 8-21, 2015 at various training locations throughout California and Arizona. The training at Prescott will take place on April 15, 16.

All of this is in addition to the exercise that people have really been buzzing about.  It is called “Jade Helm”, and in this particular “unconventional warfare exercise”, the states of Texas and Utah will be designated as “hostile territory”…

Multiple branches of the US military, including Green Berets, Navy Seals, and the 82nd Airborne Division, will participate in the 8-week long exercise, which may result in “increased aircraft in the area at night.”

Troops will be tasked with honing advanced skills in “large areas of undeveloped land with low population densities,” and will work alongside “civilians to gain their trust and an understanding of the issues.”

The exercise, in which some participants will be “wearing civilian clothes and driving civilian vehicles,” lists Texas and Utah as “hostile” territory.

Should we be alarmed by these exercises?

Some people sure think so.

Not just one, but five Walmart stores across the U.S. are closing their doors due to plumbing problems that, in some cases, will take four to six months to repair.

Those closing include locations in Livingston and Midland, Texas; Tulsa, Oklahoma; and near Los Angeles.

For the Brandon Walmart, I talked to Hillsborough County and Walmart to get answers about why these plumbing repairs will take so long and whether the issues are connected, but local customers are already skeptical.

“Why is it just plumbing problems? It’s gonna take them six months to fix up the store?” asked customer John Mambrl.

Yes, is it really going to take them six months to fix the toilets?

Either someone at Wal-Mart is extremely incompetent, or there is something fishy going on here.

In the end, perhaps there is nothing to any of this.

Perhaps all of these examples are just unrelated coincidences.

But then again, perhaps not.

What do you think?  Please feel free to add to the discussion by posting a comment below…