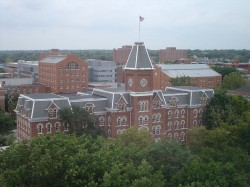 It has been an open secret for decades that college is one big joke.  But at least a college degree could get you a job.

Now that a college degree won’t open the same doors that it used to, is college really worth it?

The following is what PIMCO’s Bill Gross had to say about the pathetic state of college education in America in one of his recent newsletters…..

All of us who have been there know an undergraduate education is primarily a four year vacation interrupted by periodic bouts of cramming or Google plagiarizing, but at least it used to serve a purpose. It weeded out underachievers and proved at a minimum that you could pass an SAT test. For those who made it to the good schools, it proved that your parents had enough money to either bribe administrators or hire SAT tutors to increase your score by 500 points. And a degree represented that the graduate could “party hearty” for long stretches of time and establish social networking skills that would prove invaluable later on at office cocktail parties or interactively via Facebook. College was great as long as the jobs were there.

It wouldn’t be so bad if college was not so darn expensive.  Tuition alone at many schools is 30, 40 or even 50 thousand dollars a year.

According to recent Pew Research Center polling, 75% of Americans believe that college is too expensive for most Americans to afford.

For many American families with multiple children, the cost of college education is absolutely staggering.  The following is an excerpt from an article recently posted on CNN….

As far as raising teenagers goes, Wade and Julie Scheckla can’t complain. The California couple’s oldest daughter, Paige, 19, is an honors student heading into her junior year at the University of California at Los Angeles, while 17-year-old Brett and 14-year-old Kennedy are straight-A students and standout athletes.

With high-achieving kids, however, comes a college-funding triple threat: Two years down and seven more to go, with at least three years of tuition-bill overlap.

The entire system is breaking down.  There is no way that the status quo is sustainable.  Most families can’t afford to shell out that kind of money.

Is college worth it?  Just consider the following statistics about how much debt our young Americans are going into just to get an “education”….

#1 According to the Student Loan Debt Clock, total student loan debt in the United States will surpass the 1 trillion dollar mark in early 2012.

#2 Total student loan debt in the United States is increasing by approximately $2854 every single second.

#4 Approximately two-thirds of all college students graduate with student loans.

#6 Over the past 25 years, the cost of college tuition has increased at an average rate that is approximately 6% higher than the general rate of inflation.

#9 The cost of college textbooks has tripled over the past decade.

#11 One survey found that 23 percent of college students actually use credit cards to pay for tuition or fees.

Sadly, the quality of the education that our young people are receiving in return is absolutely pathetic.

Personally, I spent a total of 8 years attending universities in the United States.  I saw first hand what a joke most college courses are.

The truth is that things have gotten so bad that the family dog might just be able to pass most college courses in the United States today.

In a previous article I authored entitled “Student Loan Debt Hell: 21 Statistics That Will Make You Think Twice About Going To College“, I noted many statistics that seem to indicate that the quality of college education in the United States has declined dramatically.  The following are a few of those statistics….

– The typical U.S. college student spends less than 30 hours a week on academics.

– 50% of U.S. college students have never taken a class where they had to write more than 20 pages.

– 32% of U.S. college students have never taken a class where they had to read more than 40 pages in a week.

– Federal statistics reveal that only 36 percent of the full-time students who began college in 2001 received a bachelor’s degree within four years.

A college education may not be what it once was, but it is a great way to get into massive amounts of debt.

Unfortunately, most of our young people are never told that student loan debt is nearly impossible to escape from.

According to Stephen Lendman, changes in recent years have made student loans one of the cruelest forms of debt….

Sadly, millions of recent college graduates that are drowning in student loan debt can’t even get good enough jobs that will enable them to service those loans.  Just consider the following statistics….

1) According to the Economic Policy Institute, the unemployment rate for college graduates younger than 25 years old was 9.3 percent in 2010.

2) One-third of all college graduates end up taking jobs that don’t even require college degrees.

3) In the United States today, over 18,000 parking lot attendants have college degrees.

4) In the United States today, 317,000 waiters and waitresses have college degrees.

5) In the United States today, approximately 365,000 cashiers have college degrees.

6) In the United States today, 24.5 percent of all retail salespersons have a college degree.

The truth is that there are not nearly enough jobs for everyone.  There are now more hard working Americans sitting at home without jobs than at any other point since the Great Depression.  A recent article authored by Mortimer Zuckerman for usnews.com made this point beautifully….

Today, over 14 million people are unemployed. We now have more idle men and women than at any time since the Great Depression. Nearly seven people in the labor pool compete for every job opening. Hiring announcements have plunged to 10,248 in May, down from 59,648 in April. Hiring is now 17 percent lower than the lowest level in the 2001-02 downturn. One fifth of all men of prime working age are not getting up and going to work. Equally disturbing is that the number of people unemployed for six months or longer grew 361,000 to 6.2 million, increasing their share of the unemployed to 45.1 percent.

So in light of all this, is college really worth it?

For some fields, a college degree is absolutely necessary.  That doesn’t mean that a job will be there when you graduate, but if you are determined to work in a field where a college degree is 100% required, then it might be a gamble you are willing to take.

However, for millions of others young Americans college is simply not worth it.

There are literally millions of disillusioned young college graduates out there today.  Large numbers of them are living back at home with their parents.  Many of them have fallen into deep depression.

As a recent article on canada.com noted, an increasing number of our young people (especially our young men) are just “checking out” and giving up hope….

While the majority of young men are getting through school, finding work and eventually raising families, there is evidence of rising numbers who are dropping out of school, not looking for work, endlessly playing video games, even living at home in their parents’ basements.

For much more on the state of college education in the United States, check out a new YouTube video entitled “College Conspiracy“.

It is an hour long video but it is really worth watching.  You can view the video on YouTube right here.

What is perhaps one of the saddest things of all is that our colleges and universities are all about training our young people to become part of the “system”.  Most parents have no idea how much indoctrination goes on inside college classrooms. In a previous article, I described what I saw during my 8 years at American universities….

Another open secret is that most of our colleges and universities are little more than indoctrination centers.  Most people would be absolutely shocked at how much unfiltered propaganda is being pounded into the heads of our young people.

At most colleges and universities, when it comes to the “big questions” there is a “right answer” and there is virtually no discussion of any other alternatives.

In most fields there is an “orthodoxy” that you had better adhere to if you want to get good grades.

Let’s just say that “independent thought” and “critical thinking” are not really encouraged at most of our institutions of higher learning.

The reality is that college is a very expensive joke.  It is a 4 (or 5 or 6) year vacation away from reality.  If you can ignore all of the establishment propaganda that they try to pound into your head, it can be a lot of fun.

However, if you have to take out loans, going to college can be an incredibly painful financial decision as well.

So is college worth it?

Feel free to leave a comment with your opinion below…