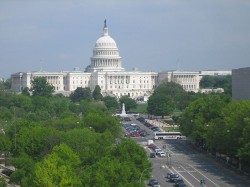 Is the U.S. government going to shutdown on March 4th, 2011?  Possibly.  The current temporary funding extension expires on that day.  Speaker of the House John Boehner has pledged that the Republicans in the House will not pass another temporary funding extension that does not include “deep” cuts.  Barack Obama has pledged that he will veto the 61 billion dollars of budget cuts that the House of Representatives has just passed.  So now Boehner and Obama are playing a really bizarre game of chicken, and if neither of them blinks the U.S. government will shut down on March 4th.  So what will that mean?  Well, in a “government shutdown”, the entire government does not actually shut down.  Rather, only “essential personnel” are kept on during a shutdown and only “essential services” are provided.  Barack Obama would keep showing up at the White House and the U.S. military would continue to do their thing.  But it would cause a temporary disruption to a lot of government activities that people normally rely on.

In the end, however, a shutdown of the U.S. government would not really make much of a difference at all unless it went on for a number of months.  The following are 5 reasons why….

So the Republicans and the Democrats are blowing all of this hot air over a measly 61 billion dollars?

Considering the fact that the federal budget deficit for this year is projected to be 1.65 trillion dollars, a mere 61 billion dollars is just a drop in the bucket.

Whether 61 billion dollars gets cut or not is not really going to make much of a difference in the long run.

At the end of the day, neither political party is willing to consider serious cuts to Social Security, Medicare or the U.S. military.

The fact that a mere 61 billion in budget cuts has us on the verge of a government shutdown proves that the U.S. government will never be able to have a balanced budget ever again.

During the last government shutdown the post office still delivered mail.  Social Security checks were still sent out.  Life did not end.

Sure there may be a delay in the delivery of government checks to some people and the processing of new Social Security claims may be put off for a little while, but fairly quickly after the end of a government shutdown life would get back to “normal”.

#3 Government Workers Will Still Eventually Get All Their Pay

During the 5 day U.S. government shutdown back in 1995, approximately 800,000 “non-essential” government employees were told not to come in to work.  But eventually they all got paid retroactively.  So not much harm was really done.

Yes, the government will initially save a bit of money from shutting down, but then there will be additional costs to ramp back up after the shutdown is over.  In fact, many analysts actually believe that the last two government shutdowns actually cost the government a lot more money than they saved.

The Republican-controlled House of Representatives just passed a budget measure that includes $61 billion in budget cuts.  Dozens of federal programs would be eliminated.  Federal funding for AmeriCorps and PBS would end.  Funding for Planned Parenthood is also on the Republican chopping block.

Obviously Barack Obama cannot agree to these things without his ultra-liberal base going hog wild.

But all of the Tea Party politicians that were just sent to Washington D.C. are bound and determined to show that they are serious about budget cuts.

So who is going to end up compromising?

In any event, it will be very interesting to see how it all plays out.  If we do see a government shutdown it probably will not be for more than a few days.

But wouldn’t it be interesting to see what would happen in the event that the government did shut down for 3 or 4 months?

Would the economy crash?

Would life as we know it change significantly?

Would the American people become extremely angry with one of the political parties?

Perhaps the greatest benefit of an extended government shutdown would be that it would get the government off our backs for at least a little while.

In the end, however, all of this is going to matter very little.

Even if the Republicans got all of the spending cuts that they want we are still going to have a record-breaking federal budget deficit this year.

Our politicians in Washington D.C. simply do not have the will to balance the budget.  Nor do the American people want them to deeply slash their government benefits.

So whether there is a government shutdown or not things are going to keep rolling along as they have been.

The U.S. government is going to continue to pile up the biggest mountain of debt in the history of the world, and politicians from both parties will continue to give wonderful speeches about how we need to “take responsibility” and “cut spending”, but very few of our politicians will ever actually even try to do anything substantial about it.

In the end, the rest of the world is going to get sick and tired of lending us gigantic amounts of money at super low interest rates.  The Federal Reserve will have to “monetize” more and more and more of our debt.  As this thing plays out, it is just going to become increasingly obvious that this whole game is just one huge Ponzi scheme.

Yes, we can continue running obscene budget deficits for right now, but a great day of reckoning is approaching.  When that day arrives there will be plenty of blame to go around.  Every president since World War 2, every Congress since World War 2, the Federal Reserve and most of the American people have all participated in this madness.

But we are all going to pay the price when the economy crashes.