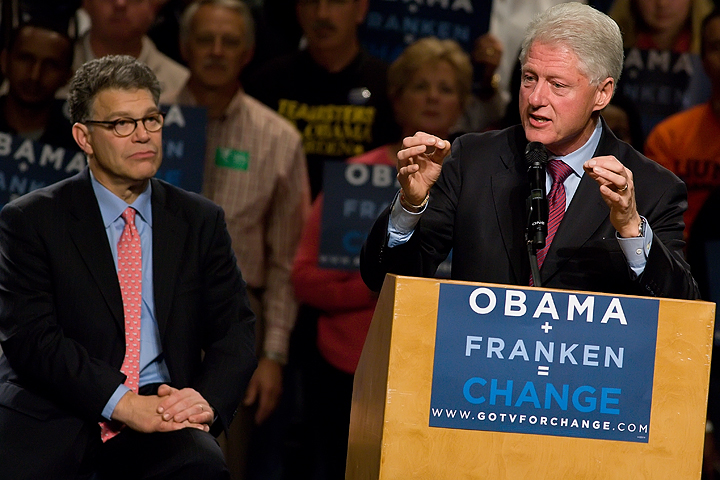 Have we entered a time when justice will begin to prevail in America?  For decades, celebrities, politicians and those in other positions of power have been engaging in very serious sexual misconduct, and victims have felt powerless to do anything about it.  But now thanks to Harvey Weinstein, the dam appears to be breaking and all of a sudden a flood of allegations is coming out.  On Monday, we learned of brand new accusations against Bill Clinton, Al Franken, Charlie Rose and New York Times journalist Glenn Thrush.

Let’s start with Thrush, because many find his case to be the most ironic.  The New York Times is supposed to be a paragon of political correctness, and yet it is being alleged that one of their most highly decorated reporters has been sexually harassing women for a very long time…

Laura McGann, the editorial director at Vox and the author of the story, described an incident at a bar five years ago, when she and Thrush were colleagues at Politico.

“He slid into my side of the booth, blocking me in,” she wrote. “I was wearing a skirt, and he put his hand on my thigh. He started kissing me. I pulled myself together and got out of there, shoving him on my way out.”

She wrote that she found a “pattern” in Thrush’s behavior through interviews with other women.

Thrush has already been suspended by the New York Times, and this is likely the end of his journalistic career.

And just minutes ago, the Washington Post reported that eight women have come forward to accuse legendary Emmy-winning broadcast journalist Charlie Rose made unwanted sexual advances toward them, including lewd phone calls, walking around naked in their presence, and groping their breasts, butts or generals.

The women were either employees or aspired to work for Rose at “the Charlie Rose Show”. The alleged harassment spans from the late 1990s to as recently as 2011. The women ranged in age between 21 to 37 at the time the harassment took place. Rose, 75, has a show that airs on PBS. He also co-hosts “CBS This Morning” and is a contributing correspondent at “60 Minutes”.

Like Thrush, Rose has been suspended by both CBS and PBS, and his journalistic career is probably over too.

Moving over to the world of politics, a second woman has come forward to accuse Senator Al Franken of sexual misconduct.  According to Lindsay Menz, Al Franken put his full hand on her bottom as they were taking a photo together at the Minnesota State Fair in 2010…

As her husband was getting ready to take their picture, Menz says that Franken ‘pulled me in really close, like awkward close’ and then ‘put his hand full-fledged on my rear’.

She said the moment last four seconds, and that immediately after the photo was taken, she left Franken’s side without saying a word.

This took place a full two years after Franken had already been in office, and it may be the final nail in the coffin that finally forces him to resign.

The new allegations refer to incidents that took place more than 10 years ago, in the early 2000s, when Clinton was hired by Ron Burkle, the playboy billionaire investor, to work at his Yucaipa companies.

Clinton helped Burkle generate business and flew around the world with a flock of beautiful young women on Burkle’s private jet, which was nicknamed ‘Air **** One.’

The four women, who have not yet revealed their identities, were employed in low-level positions at the Burkle organization when they were in their late teens and claim they were sexually assaulted by the former president.

After all these years, is the truth finally starting to catch up with Bill Clinton?

Of course Clinton and Franken are just the tip of the iceberg when it comes to sexual misconduct in Washington.  As I wrote about yesterday, 264 cases of sexual harassment in Congress have been settled since the beginning of 1997, and the total amount of money paid out in those settlements has been $17,250,854.  The American people deserve to know who was accused of sexual harassment in all of those cases, because it was taxpayer money that was used to pay all of those settlements.

In my new book entitled “Living A Life That Really Matters”, I talk about the consequences of turning our back on God as a society.  Just about every form of evil that you can possibly imagine is multiplying all around us, and we definitely need to turn back to God.

But the fact that light is being shined in some very dark places gives me hope.  I truly do believe that we can change this nation, and that includes taking back our very corrupt government.

It is when things are the darkest that light is needed the most, and let all of us rise up and be lights at this very dark time.