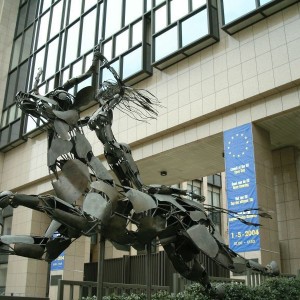 Most Americans have been paying very little attention to it, but right now Europe is desperately fighting to avoid a complete financial and economic collapse.  As the euro continues to fall precipitously, European leaders are openly declaring that this is the biggest financial crisis that Europe has experienced since at least World War II.  So exactly what is causing all this?  Well, just like the United States, countries throughout Europe responded to the economic crisis of the last several years by spending a ton of money.  The problem is that quite a few of these European nations got into debt way over their heads.  In particular, Greece, Spain, Portugal, Ireland and Italy are literally drowning in debt.  There is a very real possibility that several of them may soon default on their debts.  If that happens it could set off a financial shockwave that could encircle the entire world.  Because of the interconnectedness of the global economy, a financial meltdown in Europe would have a dramatic impact on the U.S. economy.  In fact, the continued ability of millions of Americans to enjoy the American Dream is dependent on events that are currently playing out in Europe.  Most Americans completely do not understand this, but it doesn’t make it any less true.  If Europe’s economy goes down hard, the already very fragile U.S. economy will be crushed as well.

So just how bad is the situation in Europe right now?

Well, let’s hear from some of the experts.

The following are 20 quotes about the economic collapse in Europe that will make your hair stand on end….

“Greece will certainly default on its debts, and it is an open question whether Greece will experience some form of revolution or coup – I’d put the likelihood of that over the next five years as around one in four.”

“Dealing with a banking crisis was difficult enough, but at least there were public-sector balance sheets on to which the problems could be moved. Once you move into sovereign debt, there is no answer; there’s no backstop.”

“I think we run the risk of seeing 1.16/1.17 before the next selling phase dies down. The euro is just absolutely hated here. The European rescue package still faces some regional opposition. There were rumors the German high court could rule it was unconstitutional. They don’t have a federal mechanism to put it in place, and there’s worries that at any point in time, the rescue package could be sabotaged.”

“The world is in the midst of a gigantic credit collapse.”

“The current crisis facing the euro is the biggest test Europe has faced for decades, even since the Treaty of Rome was signed in 1957.”

“Investors don’t have the confidence that Europe will be able to address its shortfalls, or that European growth can recover enough to help these economies.”

“Yet the European Union has decided that the solution to the debt crisis is even more debt and confidence in the recovery package has now evaporated. When people abandon bonds and Western currencies they will look for real assets, which can’t be created at the touch of a button.”

“The crisis in Greece is going to spread to Spain and it’s going to be very difficult to deal with. They are bailing out debt with more debt and it isn’t sustainable. It’s a wonderful scenario for gold.”

“The fear in Europe is very palpable, and it’s spreading to the U.S.”

“You don’t have to be a member of the build-a-bunker-in-Montana crowd to believe gold could hit $2,500 in the next couple of years.”

“The eurozone will lose three or four members”

“Now people are questioning if the euro will even exist in three years.”

“Not becoming the next Greece is the European rallying cry to get budget cuts passed and there is nothing like a crisis to get politicians to act.”

“To maintain debt solvency Spain must squeeze public spending: yet this policy undermines the chances of recovery which itself causes further loss of confidence.”

“LEAP/E2020 believes that the global systemic crisis will experience a new tipping point from Spring 2010. Indeed, at that time, the public finances of the major Western countries are going to become unmanageable, as it will simultaneously become clear that new support measures for the economy are needed because of the failure of the various stimuli in 2009, and that the size of budget deficits preclude any significant new expenditures.”

“I don’t want to scare anyone but I am considering investing in barbed wire and guns, things are not looking good and rates are heading higher.”

“Really, what I worry about most is the sovereign debt crisis becoming a rolling crisis and hitting the shores of the UK and the United States.”

#19) Bob Chapman of the International Forecaster:

“There is still no question in our minds that Greece was a setup to lead to a deflationary collapse later and the Greek people refused to listen. As a result it is now apparent that Greece is even worse off than the elitists imagined. We do not see European bailouts going any further. The result is the US and UK will follow. Financial Europe is history. You should all keep in mind that this is child’s play. Wait until England and the US go down, perhaps before the end of the year.”

“Euroland, burned down.  A continent on the way to bankruptcy.”

Your Road Map to “Opt out” of Obamacare!