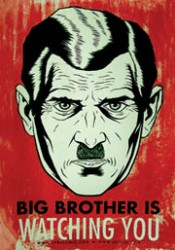 Do you know people that still believe that America is a free country?  Do you have friends or family that are proud to live in “the land of the free and the home of the brave”?  If you do, just show them this article.  The things that you are about to read are enough to make the blood of any red-blooded American boil.  We don’t live in a free country anymore.  Instead, we live in a “Big Brother” police state control grid that is becoming more restrictive every single day.  Most of our politicians seem to be control freaks that are obsessed with running every single little detail of our lives.  These days there has to be a “rule” or a “regulation” for everything.  The radical social engineers in the Soviet Union, Nazi Germany and communist China never even dared to try some of the things that are going on in America today.  We are all being treated little better than cattle and we are all being taught that it is best to just sit in our homes and absorb all of the television “programming” that is being provided for us.  Meanwhile, our public schools have become little more than prison grids.  Our children are being taught to enjoy living as docile slaves in a world where imagination, liberty, freedom and adventure are all greatly discouraged.

Unfortunately, none of this is an exaggeration.  Our politicians love to give speeches about “liberty” and “freedom”, but they always seem to have excuses to justify the endless parade of liberty-killing laws that they are imposing on all the rest of us.

Almost all of the freedoms listed in the Bill of Rights have been severely eroded.  In fact, a number of them are almost totally gone at this point.

The things that you are about to read should make you mad.  In fact, if none of these things make you mad there is a problem.  Sadly, millions of Americans have actually embraced tyranny, and if you are not outraged by any of the items listed below than you are likely one of them.

The following are 10 examples that show that we no longer live in the land of the free and the home of the brave….

#1 According to the ACLU, state police in Michigan are using “extraction devices” to download data from the cellphones of motorists that they pull over.  This is taking place even if those pulled over are not accused of doing anything wrong.

The following is how an article on CNET News describes the capabilities of these “extraction devices”….

#2 In the state of New York, the Department of Health has designated wiffle ball, dodge ball, kick ball, freeze tag, red rover, frisbee tossing and tug of war as “risky recreational activities“.  Any organization or program that allows kids to enjoy these games during the summer will now be subject to strict government regulation according to the New York Daily News….

Under the new rules, any program that offers two or more organized recreational activities – with at least one of them on the risky list – is deemed a summer camp and subject to state regulation.

#4 Would you like to have your face scanned and your ID recorded every time you attend a public event?  Don’t laugh.  The San Francisco Entertainment Commission is actually proposing a new rule which “would require all venues with an occupancy of over 100 people to record the faces of all patrons and employees and scan their ID’s for storage in a database which they must hand over to law enforcement on request.”

#5 In Delaware, police and state government officials recently tore a basketball hoop right out of a family’s front yard and carted it away because it was “too close” to the street.  They even extracted the pole for the basketball hoop out of the ground and took that away too.

#6 In Missouri of all places, two young girls named Abigail and Caitlin Mills were recently taught a lesson on how to be good citizens in the emerging totalitarian control grid going up all over the United States.  After a complaint from a neighbor, the city of Hazelwood cracked down on the two girls and told them that they must stop selling girl scout cookies in their own front yard.

#7 As I have written about previously, federal bureaucrats have outlawed the incandescent light bulbs that we all grew up with and will be forcing us to switch over to new CFL (compact fluorescent lamp) light bulbs that are more expensive and that are actually worse for the environment.  One new study conducted by scientists in Germany has shown that the new CFL light bulbs that we are being forced to use contain poisonous carcinogens that are likely cause cancer.  In fact, the German scientists say that these CFL bulbs should be “kept as far away as possible from the human environment”.

#8 Many states are aggressively seizing “unclaimed” safe deposit boxes and are selling off the contents and using the money to pay state government bills.  In the state of California, they are now going after safe deposit boxes if the owners have had “no contact” with the bank for just 3 years.  Other states are being nearly as aggressive.  If you have a safe deposit box that you have not opened in a while you need to go check on it right away.

#9 One Mississippi state judge recently issued an order for state officials to gather and deliver to him the names of every single child that is being homeschooled in the state.  The frightening thing is that the judge did this all on his own.  Nobody requested this information and there is no case pending for which this information would be required.

#10 The TSA had promised that they were going to stop groping little children at airports, but apparently that is not the case.  For example, one 6 year old little girl made headlines recently when a TSA worker touched all of her private areas before allowing her to get on an airplane.  Her parents were forced to stand aside and watch this outrage take place.

So what do all of you think about this list?

Does anyone out there still believe that we live in the land of the free and the home of the brave?

Feel free to leave a comment with your opinion below….