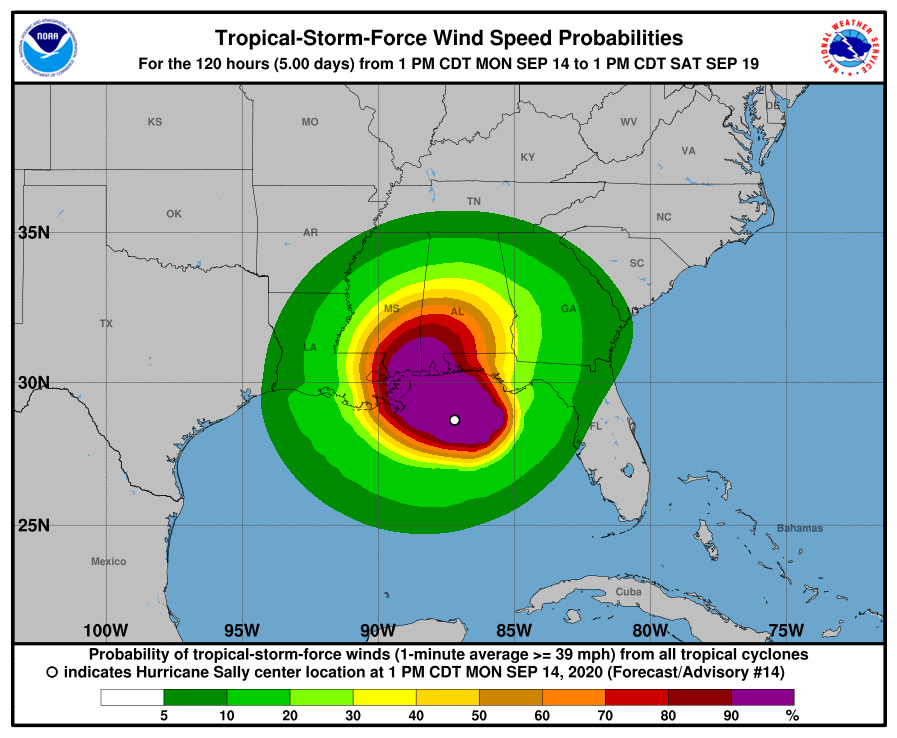 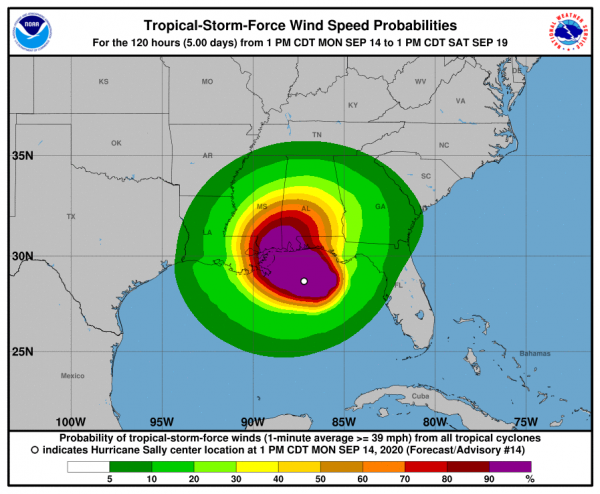 After everything else we have been through in 2020, now here comes Hurricane Sally.  It is the seventh hurricane of the 2020 Atlantic hurricane season, and it could end up being the most destructive.  On Monday it strengthened into a Category 2 hurricane with 100 mph winds, and we are being told that it could potentially become a Category 3 storm before it finally makes landfall.  But the wind speed is not what makes this storm potentially so dangerous.  Hurricane Sally is expected to slow down significantly as it approaches the Gulf Coast, and we are now being told that some areas could see up to two feet of rain.  That could mean “life-threatening flooding”, especially if this storm directly hits New Orleans.

At this hour, we still don’t know where Hurricane Sally will make landfall.  It is heading toward New Orleans, but some forecasters expect it to make a very sharp turn to the north right before it gets there.

But what if it doesn’t?

Hurricane Sally has rapidly intensified and additional strengthening is anticipated as it tracks toward the northern Gulf Coast, where it will bring an extremely dangerous storm surge, flooding rainfall and damaging winds early this week. Sally will also pose a threat of flooding rainfall farther inland across parts of the Southeast.

So if Hurricane Sally is already a Category 2 storm right now, it would seem likely that it would reach Category 3 at some point.

But what makes this storm so unique is that it is supposed to move extremely slowly once it reaches the Gulf Coast, and that could mean “up to 48 hours of storm surge and rainfall”…

This likely allows for up to 48 hours of storm surge and rainfall which could be a very dangerous situation.

If the hardest hit areas are not densely populated, the overall damage may not be that dramatic.

But if this storm were to hover over the New Orleans area for about 48 hours, we would be talking about the potential for an absolutely massive catastrophe.

So it all depends on where this storm ultimately goes.

Of course many of us didn’t even realize until recently that a threat was looming, because this storm only became a tropical depression a few days ago…

In less than 24 hours, Sally went from being a mass of showers and thunderstorms east of the Bahamas on Friday afternoon and to a tropical depression on Friday evening, before becoming a tropical storm on Saturday afternoon.

“I know for a lot of people, this storm seemed to come out of nowhere,” Louisiana Gov. John Bel Edwards said. “We need everybody to pay attention to this storm. Let’s take this one seriously.”

In 2005, it was the unprecedented flooding that made Hurricane Katrina so horrific, and this storm has the potential to create a similar sort of a disaster.

In the worst hit portions of Louisiana, Hurricane Katrina dumped up to 15 inches of rain, but Hurricane Sally could possibly dump up to 2 feet of rain in some areas…

As it lurches over the Gulf Coast, Hurricane Sally could bring 8 to 16 inches of rain, and some areas could see up to two feet. “Life-threatening flash flooding is possible. In addition, this rainfall will likely lead to widespread minor to isolated major flooding on area rivers,” forecasters at the Hurricane Center said.

So should we be concerned?

You better believe it.

In fact, Governor Edwards is openly warning that New Orleans could definitely be facing tremendous flooding once again…

“New Orleans is better prepared for a hurricane than she’s ever been before, but if you get 18 inches of water in 10 hours, I think Aspen, Colorado, would probably flood. So I’m concerned, but not paralyzed by it,” Edwards said.

And this comes at a time when much of Louisiana is still dealing with the aftermath of Hurricane Laura.  More than 80,000 people are still without power, and more than 200,000 households still do not have clean drinking water.

So this is a really bad time for another major storm to be coming along, and because of how slowly it is moving it is likely that Hurricane Sally will be far more destructive than Hurricane Laura was.

But let us hope that a worst case scenario can be avoided.  If it makes a sharp turn to the north soon, that will probably mean that New Orleans will be spared.

Unfortunately, time is running out, and as I write this article this storm is still heading toward a date with destiny.

Here in 2020, it has just been one thing after another, and now the major disasters are happening so frequently that they are starting to overlap one another.  Yesterday I wrote about the historic wildfires that are absolutely ravaging the west coast, and now today I am writing about how New Orleans is potentially facing the worst disaster that they have seen since Hurricane Katrina.

And this is just the beginning.  As “the perfect storm” continues to intensify, things are going to get even worse.

Unfortunately, most Americans are still completely clueless about all of this.

Most people still think that everything will return to “normal” very soon, but that simply is not going to happen.