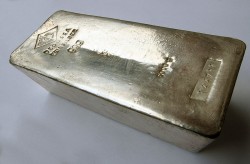 The price of silver has been absolutely exploding lately.  It has reached heights not seen since the Hunt Brothers attempted to corner the silver market over three decades ago.  But this time there are no Hunt Brothers to blame for the stunning rise in the price of silver.  So exactly why are investors buying silver as if there is no tomorrow right now?  Well, the truth is that there are a lot of reasons.  Investors have been flocking to precious metals such as gold and silver as the value of paper currencies has declined.  The euro is incredibly weak right now and the U.S. dollar appears to be on the verge of a major collapse.  In fact, the entire financial system is highly unstable right now.  In such an environment, investors seek some place safe to park their money, and right now gold and silver are seen as safe harbors.  But gold and silver have not been going up in price at the same pace.  So why is silver outperforming gold so significantly?

The price of silver has increased by more than 150% over the past 12 months.  But the price of gold has only gone up about 30%.

Clearly something is going on with silver.

That would seem to indicate that the price of silver still has a lot of room to grow relative to the price of gold.

In addition, silver is a key industrial commodity and it is constantly being used up.  Today, silver is used in a vast array of products and medicines.  The following is an excerpt from an official U.S. government report that describes just some of the ways silver is used in society today….

Silver’s traditional use categories include coins and medals, industrial applications, jewelry and silverware, and photography. The physical properties of silver include ductility, electrical conductivity, malleability, and reflectivity. The demand for silver in industrial applications continues to increase and includes use of silver in bandages for wound care, batteries, brazing and soldering, in catalytic converters in automobiles, in cell phone covers to reduce the spread of bacteria, in clothing to minimize odor, electronics and circuit boards, electroplating, hardening bearings, inks, mirrors, solar cells, water purification, and wood treatment to resist mold. Silver was used for miniature antennas in Radio Frequency Identification Devices (RFIDs) that were used in casino chips, freeway toll transponders, gasoline speed purchase devices, passports, and on packages to keep track of inventory shipments. Mercury and silver, the main components of dental amalgam, are biocides and their use in amalgam inhibits recurrent decay.

Estimates vary, but many experts are now projecting that at current consumption rates we will run out of silver at some point during this century.

On the other hand, we are not facing a similar problem with gold.  Gold, because it has traditionally been so expensive, is not used in many products at all.  The total amount of gold on earth just continues to increase each year.

Silver is also considered to be a lot more accessible for smaller investors.  Not many average Americans can afford to do much investing in gold because it is so expensive.  But just about anyone can afford a few ounces of silver.

The following is what John Browne had to say about the current situation in a recent commentary….

Today, with the Federal Reserve treating the greenback as a never ending lottery ticket for deficit spending politicians, many investors feel the U.S. dollar is good for nothing. As a result there is an increasing international pressure to remove the U.S. dollar’s reserve status. Given that there is no widely accepted alternative to the dollar (the euro has many problems of its own), this is creating fears of an international currency crisis, which has fueled interest in precious metals.

As the U.S. dollar and other paper currencies continue to decline, the demand for precious metals such as gold and silver is only going to increase.

Most investors are not stupid.  They know that the European debt crisis is approaching a meltdown.  They know that U.S. government debt is not sustainable.  They know that all of the paper currencies around the world that are backed by nothing will continue to decline in value just like they always have.  All of the major central banks have been recklessly printing money.  In such an environment it only makes sense to put your wealth into hard assets.

In any event, what is clear is that the price of silver is likely to continue to go up over the long-term.  Silver is used in thousands of products and we are slowly running out of it.  Meanwhile, the central banks of the world are absolutely flooding the globe with paper currency.  What all of that adds up to is a much higher price for silver.

So what do all the rest of you think about the price of silver?  Please feel free to leave a comment with your opinion below….