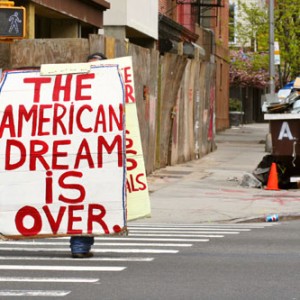 Welcome to the American Dream blog!  So what is this site going to be about?  It is going to be about trying to wake up as many people as possible.  A generation ago, our parents and grandparents could take a prosperous future in the most powerful nation on earth for granted.  But now that has fundamentally changed.  Now the U.S. government, state governments, the big corporations and American consumers have piled up the biggest mountain of debt in the history of the world.  Not only have we completely mortgaged the future of our children and grandchildren, but we have also brought the U.S. financial system to the brink of complete destruction.  The U.S. dollar, once the most stable and most powerful currency in the world, is now dropping dramatically in value and is in a death spiral.  Unemployment is spiking all over America, and in some areas it is now next to impossible to get a good job.  Millions of quality jobs have been shipped overseas and they simply are not going to come back.  It seems like each year we set another record for mortgage foreclosures and another record for personal bankruptcies.

Meanwhile, the U.S. government continues to pass more laws, more rules and more regulations that are slowly but surely strangling U.S. businesses and the American people.  A brutal police state is emerging to enforce the mandates of a crumbling empire.  Americans are literally being watched a thousand different ways as we move ever closer to a true “Big Brother” society.

At the same time the character and the morality of the American people is rapidly heading into the toilet.  Each year, approximately one million babies are killed by abortion in the United States, but very few people seem to care.  Sexual immorality, greed and corruption are absolutely rampant both in Washington D.C. and in the rest of the country.

That is why we started this blog.

People need to seriously wake up.

America is in decline and we need to admit that and get to work.

If you are as concerned about the end of the American Dream as we are, then we would love to hear from you.  Just fill out the contact form below and your comments will be emailed to us right away….