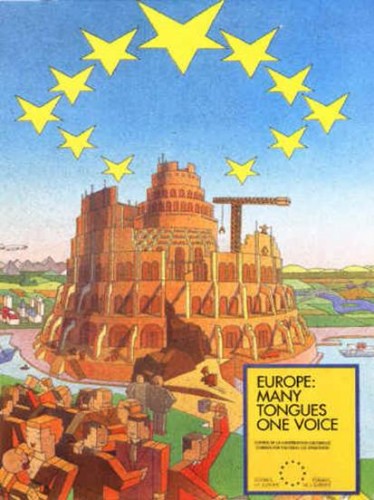 Are you ready for “The United States Of Europe”?  The integration of Europe is about to go to another level.  As the European debt crisis deepens, there are cries all over the EU for full economic integration in Europe.  On Wednesday, French President Nicolas Sarkozy and German Chancellor Angela Merkel sent a letter to European Council President Herman Van Rompuy which stated that they want a new “economic government” for Europe to be formed.  According to the letter, Sarkozy and Merkel want the leaders of the eurozone countries to “elect” a president for the new “economic government”.  The idea would be that the president would hold twice-yearly summits to address the debt problems that Europe is facing right now.  But many pro-EU critics are already howling that Sarkozy and Merkel have not gone nearly far enough.  A whole lot of “experts” in Europe are proclaiming that without full economic integration and the creation of “eurobonds”, Europe is doomed.  Jennifer McKeown, an economist for Capital Economics, put it this way when asked what would happen if eurobonds are not created fairly soon: “The likely outcome is the eurozone ceases to exist”.

This is often how huge changes occur in our world today.  First a huge problem is created, then there is a negative reaction and then a solution is presented to us.  Right now in Europe, the problem is the sovereign debt crisis.  We are being told that the only way that the eurozone can survive is if all of the countries agree to much deeper economic integration.

In an article for Seeking Alpha, Cliff Wachtel broke down the choices facing the people of Europe in the following manner….

While some are applauding the possibility of increased integration in the eurozone, others are warning about the potential consequences.

For example, a Daily Mail article entitled “Rise of the Fourth Reich, how Germany is using the financial crisis to conquer Europe” contained the following assessment of what deeper economic integration for Europe would mean….

Nigel Farage was also deeply critical of the new proposal by Sarkozy and Merkel….

Bit by bit, eurozone members are losing their sovereignty as the European superstate is created. Nothing in these proposals will calm the markets. I am also prepared to bet that the European political elite will not ask the permission of their peoples via a referendum to make this happen.

But Sarkozy and Merkel seem unconcerned about the critics.  In fact, they have announced plans to have a common corporate tax rate by 2013 and to coordinate work on their national budgets.

So if the leadership of the German and French governments both want deeper economic integration for Europe, will anyone else in the eurozone be strong enough to resist it?

EU Commission President Jose Manuel Barroso is already calling the proposals put forth by Sarkozy and Merkel “an important political contribution by the leaders of the two largest euro area economies to this debate and the on-going work.”

Countries such as Greece, Portugal, Italy and Spain are already deeply financially dependent on Germany.  Either they will have to leave the eurozone (which would be a financial disaster for them) or they will have to go along with what Germany and France want.

But economic integration in Europe certainly will not be easy.  There is still a lot of resistance in the EU to the idea of a “United States of Europe”.  Many in the northern countries are very opposed to further economic integration with the financially irresponsible nations of southern Europe.

Craig Alexander, the chief economist at Toronto-Dominion Bank, recently made the following statement regarding the problems of trying to more fully integrate Europe.

“The problem is the political system in Europe can’t cope with the jump from the current system to a fiscal union in one go.”

So it will certainly be very interesting to see what happens.  There still is a very real chance that the EU could break up and the euro could implode.  Absolutely nothing is set in stone right now.

But the leaders of the EU are going to do whatever they can to keep it together.  They truly believe that a fully united Europe under the banner of the EU is what is best for the continent.

In the end, however, the real goal is to unite the entire world.  Regional governments such as the EU are seen as an intermediate step toward a truly global government.  As I have written about previously, the globalists hope one day to have a truly global economy that uses a new global currency.

Truly effective global governance is the strategic horizon that humanity must pursue today with all its energy.

It sounds difficult to achieve, and so it will be. But it has nothing to do with pessimism. The challenge of governing global risks is nothing less than the challenge of preventing the “end of history” – not as the placid apotheosis of liberal democracy’s global victory, but as the worst collective failure we can imagine.

People like Solana truly believe that if we can eventually unite the entire world that it will bring in a new era of peace and prosperity.

Many of them believe that if they can get the world to form 10 or 12 “regional unions” first, eventually they will be able to get all of those regional unions to form one giant global superstate.

Globalists such as Solana are convinced that they are doing this for the good of mankind.  They really believe that war and poverty can be wiped out if we are all under one giant government.

But as we have seen in the past, the larger the governments get, the worse the tyranny tends to become.  Setting up a “one world government” may seem like a good idea to some people, but the truth is that it would set the stage for greater oppression than we have ever seen before.