Democrat Party headquarters in Lake County, Florida has been flying an American flag with a face of Barack Obama on it.  Yes, you read that correctly.  The “Obama flag” features a huge picture of the face of Barack Obama in the area where the stars are usually located.  To many Americans today, the American flag may be “just a piece of cloth”, but when I was young I was taught that one must never desecrate the American flag.  The American flag is our highest national symbol.  Millions of Americans have fought and died defending freedom and liberty under that banner.  To see a photo of Barack Obama plastered on it is an absolute disgrace.  Sadly, there are lots of these flags floating around.  In fact, you can buy them online for $12.95.  Down in Florida, the chairwoman of the Lake County Democratic Party took down the “Obama flag” after a group of veterans protested, but she also said that she is not promising that she will not put it back up and that she is going to consult an attorney about all of this.

Needless to say, a lot of veterans had steam coming out of their ears when they heard about the Obama flag.  Korean war veteran Don Van Beck said that he was absolutely furious when he saw what they had done to the American flag….

Van Beck was one of the vets that confronted the chairwoman of the Lake County Democratic Party (Nancy Hurlbert) about this flag.

One local news report detailed the tense moment that occurred when the vets asked that the flag be taken down….

“There are laws against desecrating the flag,” Van Beck said, right before he read out loud the federal flag code, public law 344, section 4G to Hurlbert: “The flag should never have placed upon it or any part of it, any marks, insignia, letters, words, figures, designs, picture or drawings of any nature. We would like to ask you to take it down please.”

Thankfully the Obama flag was eventually taken down because who knows what those vets would have done if it had kept flying.

A lot of old vets may have aging bodies, but their spirits are still very much alive.

Ex-marine John Masterjohn was also incredibly upset when he learned about the Obama flag.  He compared this flag to what we have seen from some of the worst totalitarian regimes in history….

And that is exactly what this Obama flag reminds me of.  It reminds me of pictures of Chairman Mao plastered everywhere…. 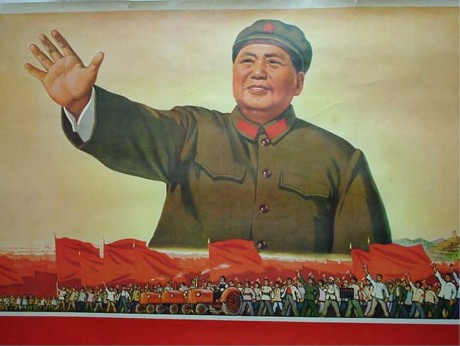 Shockingly, the Democrats in Florida are not even apologizing.  In fact, they seem rather proud of the Obama flag.

A statement from the Lake County Democratic Headquarters said the following….

“We were given this as a gift. We are proud of our president, we’re proud of the United States, and we felt it was time to display that.”

But that is not even the worst part.

What Nancy Hurlbert, the chairwoman of the Lake County Democratic Party, had to say about all of this was absolutely disgraceful….

“It leads me to believe that it’s not about the flag,” she told FoxNews.com. “Certain elements cannot accept Barack Obama as president.”

We should just accept the face of Barack Obama being plastered on the American flag?

This is just another sign of how far we have fallen as a nation.

America is not the same place that it used to be and people better wake up.

And there is one last thing.  It also turns out that the Obama flag was made in China.

So what do you think about the Obama flag?  Please feel free to leave a comment with your thoughts below…. 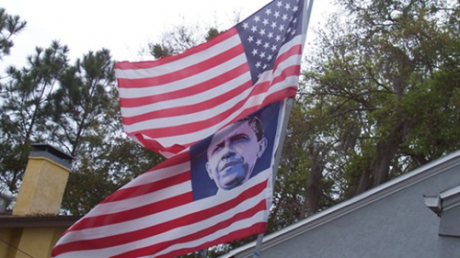