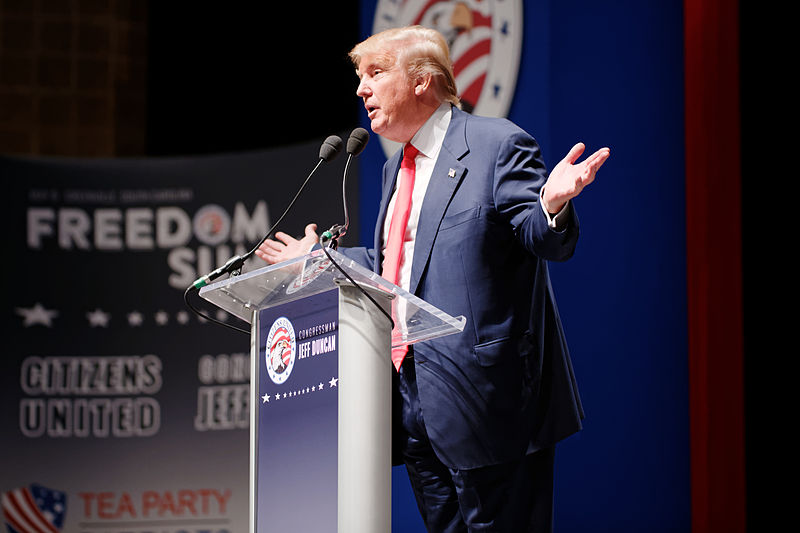 Could Donald Trump become the next Ross Perot?  Right now, there is a push by Republican insiders to try to find a way to sabotage the Trump campaign and even potentially exclude him from future debates.  These Republican operatives claim that he is “damaging the party”, but what they really mean by that is that he is playing havoc with their plans of getting Jeb Bush into the White House.  You see, the truth is that most of the other Republican candidates are just there for window dressing.  All of the big money is already lining up behind Jeb Bush, and his campaign recently announced that it has already raised 114 million dollars.  Perhaps Scott Walker or Marco Rubio have an outside chance of contending with the Bush machine, but everyone else is just supposed to be cannon fodder and most of them know it.  If everything goes to plan, Bush will clinch the nomination very early, and that is precisely the way that the Republican establishment wants it.

But now Trump has rolled in like a wrecking ball and is messing everything up for the Republican establishment.  He is getting the vast majority of the media attention, he is talking about how terrible Bush is, and many of the things that Trump is saying are driving Republican insiders up a wall.  The following is an excerpt from a recent article on a liberal website…

He objects strongly to the trade agreements, including the proposed Trans-Pacific deal now in the news, on the grounds that other countries, such as Japan and China, are superior negotiators and are taking us to the cleaners. He wants to build a tall wall on the Mexican border. He is against Common Core and federalizing education. He warned against invading Iraq in some detail, predicting it would expand Iran’s influence.

On each of those issues Trump is right, but that puts him at odds with Bush.

Bush is very much in favor of the Trans-Pacific partnership, Bush is not in favor of building a giant wall on the Mexican border, and Bush’s brother was the one that started the Iraq war in the first place.

Trump is not following the script of the Republican establishment, and that is making them very angry.

At this point, Republican insiders are so upset with Trump that they have even discussed ways to exclude him from future debates.  The following is an excerpt from a recent New York Times article…

Many national Republican officials are increasingly resigned to Mr. Trump’s looming presence. At a meeting of the Republican Governors Association this week in Aspen, Colo., donors and operatives mused about how to prevent him from hijacking the debate.

One idea that came up was to urge three leading candidates — Jeb Bush, the former Florida governor; Mr. Walker; and Senator Marco Rubio of Florida — to band together and state that they would not participate in any debate in which Mr. Trump was present, using his refusal to rule out a third-party bid as a pretext for taking such a hard line. The thinking, according to a Republican involved in the conversations, was that the lesser-funded prospects who have been eclipsed by Mr. Trump would follow suit, and the TV networks airing the debates would be forced to bar Mr. Trump in order to have a full complement of candidates.

Nothing like this has ever been done before, but this is how desperate Republican insiders are to get rid of Trump.

But if they aren’t careful, Donald Trump could go from just being a thorn in their side to being their worst nightmare.

You see, Donald Trump is already very seriously considering the possibility of running as an independent candidate.  The following is an excerpt from an article that the Hill published on Wednesday…

Donald Trump says the chances that he will launch a third-party White House run will “absolutely” increase if the Republican National Committee is unfair to him during the 2016 primary season.

“The RNC has not been supportive. They were always supportive when I was a contributor. I was their fair-haired boy,” the business mogul told The Hill in a 40-minute interview from his Manhattan office at Trump Tower on Wednesday. “The RNC has been, I think, very foolish.”

Pressed on whether he would run as a third-party candidate if he fails to clinch the GOP nomination, Trump said that “so many people want me to, if I don’t win.”

“I’ll have to see how I’m being treated by the Republicans,” Trump said. “Absolutely, if they’re not fair, that would be a factor.”

If Donald Trump even suspects that Republican insiders are actively trying to sabotage his campaign, he could very easily pull a Ross Perot.

We all remember what happened in 1992.  Ross Perot ran as a third party candidate, and he ended up taking 18.9 percent of the vote.  Virtually everyone agrees that he took far more votes away from George Bush than he did from Bill Clinton, and so his candidacy may have actually decided the election.

Could we see a similar scenario play out this time around?

One recent survey found that Trump does have sizable support in a hypothetical three way race between himself, Jeb Bush and Hillary Clinton…

A poll released earlier in this week may confirm that fear. Testing a hypothetical three-way matchup among Trump, former Gov. Jeb Bush of Florida (R), and Democratic front-runner Hillary Clinton, a Washington Post/ABC survey found Clinton (46%) easily ahead of Bush (30%) and Trump (20%).

Unfortunately for the Republican establishment, their relationship with Trump can probably not be repaired at this point.  It would take some major sucking up to undo the damage that has already been done, and I just don’t see Republican insiders doing that any time soon.

So the odds are probably pretty high that Donald Trump will end up choosing to run as an independent.

If he does, will he run under the banner of an existing party, or will he create his own?

If Trump chooses to go his own path, perhaps he will draw from history in naming his new party.

During the peak of the populist movement, a political party known as “the People’s Party” existed from 1891 to 1908.  It was a party that sought to legitimately represent the concerns of millions of ordinary American citizens.

And that is something that we desperately need today.  We need a party that will actually represent the people instead of just doing the bidding of the elite.

So is Trump the man for the job?