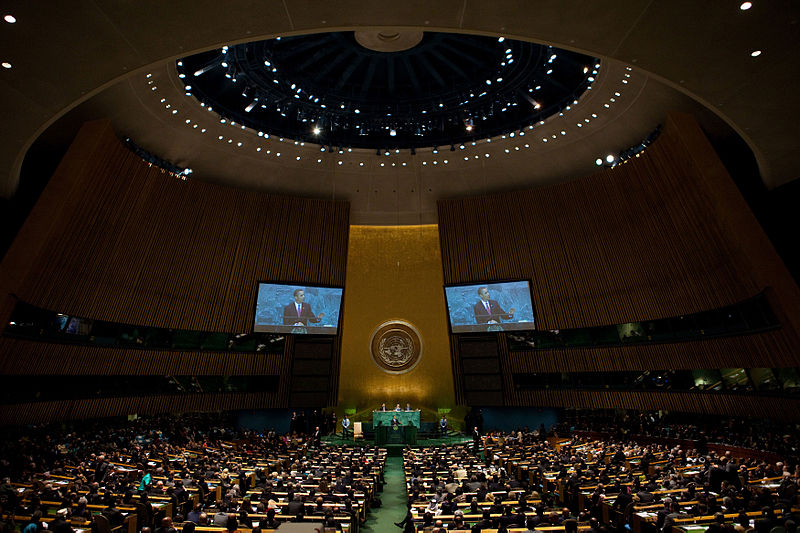 During Barack Obama’s eighth and final address to the United Nations he let his true colors show. He staunchly defended globalism, he took several not very subtle shots at Donald Trump, and he boldly declared that Israel “cannot permanently occupy and settle Palestinian land”. That statement about “Palestinian land” was extremely alarming to many, because there are indications that Obama may decide to support a UN Security Council resolution that establishes the parameters for a Palestinian state during his final months in the White House. Barack Obama has promised to squeeze every ounce of “change” out of the remainder of his term that he possibly can, and his last UN speech showed what is on his heart at this moment.

According to the Washington Post, Obama’s final UN address represented “an impassioned plea on behalf of a liberal world order”…

President Obama, in his final speech to the United Nations Tuesday, made an impassioned plea on behalf of a liberal world order that he admitted was under growing threat from wars in the Middle East and rising nationalism at home and in Europe.

Speaking to the U.N. General Assembly for the eighth and last time as president, Obama sought to rise above the conflicts of the moment and outline a future of international cooperation, stressing the importance of the global liberal institutions formed after World War II, including the United Nations.

Barack Obama is a true believer in internationalism. He appears to be completely convinced that the best path forward for humanity involves more integration on all levels – political, economic and even spiritual. Just check out this excerpt from his speech…

“I believe that at this moment we all face a choice,” Obama said. “We can choose to press forward with a better model of cooperation and integration or we can retreat into a world sharply divided and ultimately in conflict along age-old lines of nation and tribe and race and religion. I want to suggest to you today that we must go forward and not back.”

Obama’s obsession with globalism is one of the reasons why he has so much disdain for Donald Trump, and his speech at the United Nations contained quite a few comments that seemed specifically targeted at him. The following comes from CNN…

He painted a dark picture of the future awaiting Americans, and the world, if the forces of “aggressive nationalism” or “crude populism” win out. And he specifically inveighed against building a wall — a centerpiece of Trump’s proposal on border security.

“A nation ringed by walls would only imprison itself,” Obama declared to the assembled representatives of the UN’s member states.

But even more alarming than his defense of globalism was his wording about the Israeli-Palestinian conflict. I can’t remember any previous president ever using the phrase “Palestinian land” before. Obviously a “two-state solution” is already an inevitable outcome in Obama’s mind. Here is the full quote for those that have not seen it yet…

To me, this statement is a major red flag.

Could it be possible that Barack Obama plans to stab Israel in the back by supporting a UN Security Council resolution that permanently divides the Holy Land before his time in the White House is done?

On Wednesday, Obama is scheduled to meet with Israeli Prime Minister Benjamin Netanyahu. As you can see, White House Press Secretary Josh Earnest says that a discussion about a “two-state solution” will be on the agenda…

Obama plans to meet Israeli Prime Minister Benjamin Netanyahu on Wednesday to “discuss the need for genuine advancement of a two-state solution to the Israeli-Palestinian conflict in the face of deeply troubling trends on the ground,” according to White House Press Secretary Josh Earnest.

Barack Obama knows that he only has until January 20th, 2017 to take any action on the Israeli-Palestinian conflict.

If he supports a UN Security Council resolution formally recognizing a Palestinian state and granting them East Jerusalem as their capital, the next president would not be able to go back and undo that. So this may be a way for Obama to “leave a legacy” in the Middle East, and he may especially be tempted to do this if it looks like Donald Trump could win the election…

A looming Donald Trump presidency would make it more likely for lame-duck US President Barack Obama to support a United Nations Security Council resolution laying down the basic parameters for the creation of Palestinian state, a former top US official said Sunday.

“I suspect that if Trump wins, the president would be more inclined to go for a Security Council resolution to try to do something that binds, creates standards for the future that the next president couldn’t undo,” Dennis Ross said at a conference on the future of Zionism and the US-Israel relationship. “If Clinton wins, I suspect he [Obama] would be more sensitive to her concerns as to whether this helps or hurt her.”

Less than a week ago, I wrote an article about how UN Secretary-General Ban Ki-moon also appears to want to see movement toward a Palestinian state before his term ends, and he reaffirmed this position very strongly on Tuesday…

Earlier on Tuesday, UN secretary-general Ban Ki-moon told the UN General Assembly that the only solution to the Israeli-Palestinian conflict would be a two-state solution, and that the one-state option would “spell doom” for both sides.

“This is madness. Replacing a two-state solution with a one-state construct would spell doom: denying Palestinians their freedom and rightful future, and pushing Israel further from its vision of a Jewish democracy towards greater global isolation,” said Ban.

Of course Barack Obama and Ban Ki-moon are both dead wrong about this.

If the UN Security Council passes a resolution that sets the parameters for a Palestinian state, it would be one of the worst things that they could possibly do, and it would set the stage for a major war in the Middle East.

But the pressure is on, and the world community seems to sense a real opportunity to divide the land of Israel.

Every year, the World Council of Churches observes a “World Week for Peace” during the month of September, and the focus is almost always on the Middle East.

This year, the work of the Palestine Israel Ecumenical Forum will be highlighted during the “World Week for Peace”, and it is an organization that is strongly affiliated with the World Council of Churches. On their website, the Palestine Israel Ecumenical Forum has just released a poem that declares that “it’s time for Palestine”. This is how that poem begins…

Overall, I don’t know if I have ever seen such an international push for a Palestinian state like we are seeing right now.

And the man that holds all the power is Barack Obama, because a potential U.S. veto is all that stands in the way of a UN Security Council resolution that divides the land of Israel and establishes a Palestinian state.

At this moment we are in the danger zone. Obama has only four months left to pull the trigger, and Donald Trump and Hillary Clinton have both stated that they do not plan to support such a resolution once they take office.

So if something is going to happen, it is almost certainly going to be before January 20th, 2017.

It is unclear what Obama is going to do at this point, but it is not exactly comforting that the fate of the land of Israel lies in his hands.