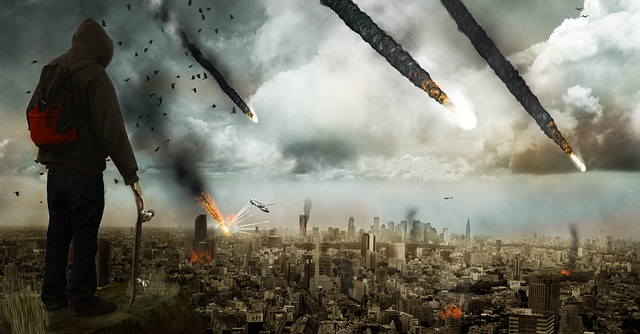 If you want to see war without end, vote for Hillary Clinton. It is tremendously ironic that Hillary Clinton and the mainstream media have attempted to portray Donald Trump as “dangerous” and “temperamental”, because it is Clinton that actually has a long history of being emotionally unstable. She has a temper that is absolutely legendary, and she has been cussing out the men and women in her security detail for decades. Hillary Clinton played a key role in starting the civil war in Syria, thanks to her Libya is a post-apocalyptic wasteland today, and now she is picking a fight with the Russians before she has even won the election. Of all the candidates there were running for president this election cycle, there was nobody that was even close to as dangerous as Hillary Clinton, and if she wins the election I am fully convinced that World War 3 will begin before her time in the White House is over.

Someone that shares this opinion with me is Donald Trump. According to Reuters, Trump recently stated that we are “going to end up in World War Three over Syria if we listen to Hillary Clinton”…

On Syria’s civil war, Trump said Clinton could drag the United States into a world war with a more aggressive posture toward resolving the conflict.

Clinton has called for the establishment of a no-fly zone and “safe zones” on the ground to protect non-combatants. Some analysts fear that protecting those zones could bring the United States into direct conflict with Russian fighter jets.

“What we should do is focus on ISIS. We should not be focusing on Syria,” said Trump as he dined on fried eggs and sausage at his Trump National Doral golf resort. “You’re going to end up in World War Three over Syria if we listen to Hillary Clinton.”

In order to have a no-fly zone in Syria, you would have to enforce it.

And in order to enforce it, you would have to be willing to shoot at the Russians.

According to National Intelligence Director James Clapper, that could have dire consequences…

Russia could shoot down a U.S. aircraft if a no-fly zone were imposed over Syria, National Intelligence Director James Clapper said Tuesday.

“I wouldn’t put it past them to shoot down an American aircraft if they felt that was threatening to their forces on the ground,” Clapper said, speaking with CBS’ Charlie Rose at the Council on Foreign Relations in New York about several national security issues.

Of course Clapper is not alone in that assessment. The Chairman of the Joint Chiefs of Staff, General Joseph Francis Dunford, says that imposing a no-fly zone over all of Syria “would require us to go to war”…

“Right now, Senator, for us to control all of the airspace in Syria it would require us to go to war, against Syria and Russia,… That’s a pretty fundamental decision that certainly I’m not going to make.” (Senate Armed Services Committee, September 22, 2016, emphasis added)

But Hillary Clinton is unwavering in her position that this is what she wants.

You see, the truth is that Hillary Clinton wants to win the war that she started in Syria. Back in 2011, she spearheaded an effort along with Saudi Arabia and Turkey to try to use the Arab Spring uprisings in the Middle East as an opportunity to try to overthrow President Assad in Syria. If it wasn’t for her meddling, millions of refugees would not be pouring into Europe and elsewhere, and there would be no “humanitarian crisis” in Syria at all.

Thanks to Russian intervention, the war in Syria is not too far from being over, but the Obama administration is desperate to keep it going. They understand that if Assad is victorious that all of their efforts for the last five years have been wasted, and that is why they are so determined to keep Aleppo from falling. Without Aleppo, many of the jihadist rebels that the Obama administration has been supporting won’t have anywhere to hide.

So the Obama administration has actually been considering direct strikes against the Syrian military, and the Russians have already said that they will not allow this to happen. If Obama is insane enough to order airstrikes against Syrian forces and the Russians start shooting back, that could set off a chain of events that could rapidly spiral completely out of control.

One recent survey found that current American leadership has a 1 percent approval rating in Russia right now, and the Russians dislike Hillary Clinton even more than they dislike Barack Obama. The Russians know that if Hillary Clinton is elected that it is quite likely that they will have to fight a war with us, and that is why they desperately want Donald Trump to win in November. You can see this outlook reflected in comments that Russian President Vladimir Putin recently made about the two candidates…

“Mrs. Clinton has chosen to take up a very aggressive stance against our country, against Russia. Mr. Trump, on the other hand, calls for cooperation – at least when it comes to the international fight against terrorism,” Putin said.

“Naturally we welcome those who would like to cooperate with us. And we consider it wrong, that we always have to be in conflict with one another, creating existential threats for each other and for the whole world,” Putin noted.

Anyone that watched the three presidential debates could see that Hillary Clinton is absolutely seething with animosity for Russia. The thought of her finger on the nuclear trigger is almost too terrible to contemplate, but it may soon become a reality.

And even now, the Obama administration and our NATO allies are shifting forces into position for a confrontation with Moscow. This week it is being reported that NATO troops will soon be sent to Poland, Estonia, Latvia and Lithuania…

Nine hundred US troops are to be sent to eastern Europe next year as America’s troubled relationship with Russia enters new, uncertain territory.

A US-led battle group of NATO allied soldiers will be sent to Poland as part of the multi-nation operation.

British forces will lead one of the four battle groups in Estonia, Canada will spearhead the presence in Latvia and Germany will be present in Lithuania.

In addition, Infowars is reporting that U.S. Marines will soon be stationed in Norway near the border with Russia…

After accepting a Pentagon proposal, Norway will host US Marines at a base near the Russian border as Russia deploys nuclear-capable ships to Kaliningrad.

A rotating force of approximately 330 Marines will be stationed at an airfield in the city of Vaernes, just outside Trondheim, beginning in January. Norway and Russia share an 122-mile border in the Arctic.

“The US initiative to augment their training and exercises in Norway by locating a Marine Corps Rotational Force in Norway is highly welcome and will have positive implications for our already strong bilateral relationship,” said Norwegian Defense Minister Ine Eriksen Søreide.

Most Americans aren’t aware of any of this, nor do they really care about our relationship with Russia.

But in Russia things are completely different. The possibility of war with the United States is the biggest news story over there these days, and feverish preparations are being made for a potential nuclear confrontation…

Russian authorities have stepped up nuclear-war survival measures amid a showdown with Washington, dusting off Soviet-era civil-defense plans and upgrading bomb shelters in the biggest cities.

At the Kremlin’s Ministry of Emergency Situations, the Cold War is back.

The country recently held its biggest civil defense drills since the collapse of the U.S.S.R., with what officials said were 40 million people rehearsing a response to chemical and nuclear threats.

I know that I have been writing about this over and over, but the truth is that we are on a path to war with Russia, and the election of Hillary Clinton would greatly accelerate the march toward war.

In my controversial new book, I expressed my belief that war with Russia is coming, but at the time that I wrote it I didn’t know how the election would turn out.

At this point it looks like Clinton is very likely to win on November 8th, and that would be absolutely disastrous for our relationship with Russia.

If you are reading this and you are considering voting for Hillary Clinton, please don’t do it. We simply cannot afford to have an emotionally unstable warmonger with a violent temper in the White House at this critical time.

If the American people do choose Hillary Clinton this November, I believe that it will be a choice that they will bitterly, bitterly regret in future years.