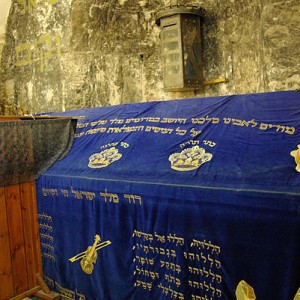 Of course the Israeli government is formally denying that there is a secret deal in the works, but that has not stopped the media in Israel from reporting on these persistent rumors for months.  For example, here is a brief excerpt from a recent Arutz Sheva article…

Is there a secret deal between the Vatican and Israel to transfer control over King David’s Tomb to the Catholic church? An investigative report in Makor Rishon cites La Stampa Vatican Insider journalist Andrea Tornielli as saying that the deal has been nearly completed, and that Deputy Foreign Minister Ze’ev Elkin is in charge of the negotiations with the Vatican, but Israel denies any such deal.

And as I mentioned above, a member of the Knesset claims that Chief Sephardic Rabbi Yitzchak Yosef told him that Netanyahu has requested formal permission to give the Tomb of David to the Vatican…

A Knesset Member said Thursday that Chief Sephardic Rabbi Yitzchak Yosef told him that the Prime Minister’s bureau contacted him and asked to grant halakhic permission for Israel to hand over the Tomb of David to the Vatican.

In fact, that same article states that the entire Mount Zion complex could end up being transferred into the hands of the Vatican…

The MKs were unanimous in declaring that they intend to do everything within their power to forestall any attempt to hand over the Tomb to the Vatican. There are also reports that not just the Tomb, but the entire Mount Zion compound is up for transfer. The MKs made clear that the zone is under Israeli sovereignty and will remain so.

There have been reports, recently, of a secret negotiation channel between the Vatican and the Israeli government, regarding the Tomb – and especially its second floor, which the Vatican calls the “Room of the Last Supper” – and the Mount Zion compound.

This is pretty startling stuff.  For a long time, the Vatican has been positioning itself to take control of more holy sites in Jerusalem.  But the genesis for this idea may have actually come from the U.S. State Department.  As WND reported last December, U.S. Secretary of State John Kerry envisions the holy sites in Jerusalem being under international control…

Secretary of State John Kerry quietly presented a U.S. plan for eastern Jerusalem that calls for an international administrative mandate to control holy sites in the area, according to informed Palestinian and Israeli diplomatic sources.

The exact composition of the international mandate is up for discussion, the sources said, but Kerry’s plan recommended a coalition that includes the Vatican, together with a group of Muslim countries such as Turkey and Saudi Arabia.

If the Vatican does gain control of more of the holy sites in Jerusalem, it would move even farther in the direction of being regarded as “the top religious authority in the world”.  This certainly would not bother Pope Francis.  In fact, he seems to be quite eager to do what he can to bring the religions of the world together.  For much more on this, please see my previous article entitled “Pope Francis And The Emerging One World Religion“.

And the U.S. State Department is certainly applying as much pressure as it can in order to get a “peace deal” rammed through.  In particular, U.S. Secretary of State John Kerry seems to spend an extraordinary amount of time twisting the arm of Israel.  Just the other day, he went so far as to threaten that Israel could become “an apartheid state” if the peace talks fail…

In what may be a sign of his frustration over the failure of his peace efforts, The Daily Beast revealed on Sunday that U.S. Secretary of State John Kerry has said that if Israel doesn’t make peace soon, it could become ‘an apartheid state,’ like the old South Africa.

The comments were made by Kerry during a meeting with influential world leaders in a closed-door meeting Friday. The Daily Beast obtained a recording of the comments.

According to the report, Kerry’s use of the loaded term is already rankling Jewish leaders in America.

After making such a comment, Kerry should have been immediately forced to resign, but of course that did not happen.

Instead, officials from the State Department continue to turn up the heat on Israel.  Just consider what some “anonymous U.S. officials” recently told the Times Of Israel…

American officials directly involved in the failed Israeli-Palestinian peace process over the last nine months gave a leading Israeli columnist a withering assessment of Prime Minister Benjamin Netanyahu’s handling of the negotiations, indicated that Palestinian Authority President Mahmoud Abbas has completely given up on the prospect of a negotiated solution, and warned Israel that the Palestinians will achieve statehood come what may — either via international organizations or through violence.

Speaking on condition of anonymity to Nahum Barnea, a prominent columnist from Israel’s best-selling daily Yedioth Aharonoth, the officials highlighted Netanyahu’s ongoing settlement construction as the issue “largely to blame” for the failure of Secretary of State John Kerry’s July 2013-April 2014 effort to broker a permanent peace accord.

They made plain that US President Barack Obama had been prepared to release spy-for-Israel Jonathan Pollard to salvage the talks. And they warned that “the world will not keep tolerating the Israeli occupation.”

But for any peace agreement to work, it isn’t just the Palestinian Authority that Israel has to deal with.

Hamas controls the Gaza Strip, and Hamas seems entirely uninterested in peace.  Just consider what one of the top leaders of Hamas said on Saturday…

Hamas will never recognise Israel and will not accept the conditions laid out by the Middle East peacemaking Quartet, according to the Islamist movement’s deputy leader.

“We will not recognise the Zionist entity,” he said at a press conference in Gaza City.

Could he have been any clearer?  The truth is that peace with Israel is absolutely antithetical to everything that Hamas stands for.  The following are just a few quotes from the Hamas Charter…

Sure, we will probably see a U.S.-brokered peace deal within the next year or two.

But it won’t bring lasting peace.

Instead, it will just set the stage for the next major war in the Middle East.

So what are your thoughts on all of this?