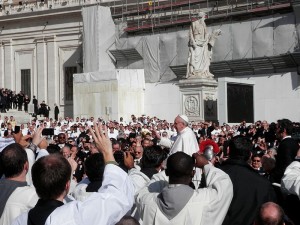 Does Pope Francis intend to help the global elite achieve their goal of uniting all of the religions of the world under a single banner?  Will he be instrumental in establishing a single global religion for the glorious “new age” that the global elite believe is coming?  After he was elected, the cover of Time Magazine declared Pope Francis to be the “New World Pope“, and since his election Pope Francis has made it abundantly clear that he is going to make ecumenical outreach a top priority.  He has spoken of his “determination to continue on the path of ecumenical dialogue“, and he has already held a number of very high profile ecumenical meetings.  Not only has he worked hard to reach out to leaders from various Christian traditions, he has also made it a point to try to acknowledge the mutual bonds that he feels with all other religions.  For example, in one recent address he made it a point to say that he believes that Muslims worship and pray to the “one God” that he also worships.  This “all roads lead to the same God” philosophy is a hallmark of the one world religion that the global elite have been slowly building toward for decades.  The global elite know that even with a one world economy and a one world government, humanity will never be truly united until there is a single global religion.  Unfortunately, this one world religion that they are seeking to establish is diametrically opposed to the Christianity that we find in the Bible.  By throwing out Biblical truth for the sake of “friendship between men and women of different religious traditions“, is Pope Francis fundamentally betraying the faith that he claims to represent?

If there is going to be a one world religion, there will have to be a bond formed between Roman Catholicism and Islam.  They are the two largest religious traditions on the planet, and so any truly “global religion” would definitely require the participation of both of them.

That is one reason why what Pope Francis has already had to say about Islam is so noteworthy.  The following comes from remarks that he made during his very first ecumenical meeting…

But are “Allah” and the God of the Bible the same thing?

Of course not.  For example, Christians believe that Jesus Christ is God.  Muslims deny this vehemently.  For much more on why “Allah” and the God of the Bible are not the same, please see this article.

So either Pope Francis is denying the divinity of Jesus Christ, or he is exhibiting a frightening ignorance of basic Christian theology, or there is some other agenda at work here.

During that same ecumenical meeting, Pope Francis also made it a point to state that he feels “close” to those that belong “to any religious tradition”…

In this, we feel close even to all those men and women who, whilst not recognizing themselves belonging to any religious tradition, feel themselves nevertheless to be in search of truth, goodness and beauty, this truth, goodness and beauty of God, and who are our precious allies in efforts to defend the dignity of man, in building a peaceful coexistence among peoples and in guarding Creation carefully.

It is one thing to love people and to seek to build friendships with them, but it is another thing entirely to throw out the most basic beliefs of the faith that you supposedly represent in order to promote a specific agenda.

And Pope Francis definitely appears to have an agenda.  On another occasion, Pope Francis declared that it was time “to intensify dialogue” with other religions, and that he was “thinking particularly of dialogue with Islam.”

But this affinity for Islam did not just begin recently.  The truth is that Pope Francis was working hard to build bridges with Islam even when he was the Archbishop of Buenos Aires…

“His humility drew my attention,” Sheik Mohsen Ali, an important Islamic leader in Argentina, told the Buenos Aires Herald. He “always showed himself a friend of the Islamic community.”

Sumer Noufouri, secretary-general of the Islamic Center of the Republic of Argentina, told the Buenos Aires Herald that the new pope is a “respectful, pro-dialogue person who knows Islam.”

But of course Pope Francis is not just reaching out to the Islamic world.

He has also been working hard to “intensify dialogue” with other Christian traditions.

In particular, he seems quite interested in improving relations with the Orthodox churches of the east…

Before his address, the pope had a private meeting with Ecumenical Patriarch Bartholomew from Istanbul, who attended Francis’s inaugural Mass on Tuesday.

It was the first time the spiritual head of Orthodox Christians had attended a Roman pope’s inaugural Mass since the Great Schism between western and eastern Christianity in 1054.

At Wednesday’s meeting, Francis called Bartholomew “my brother Andrew,” a reference to the apostle who was the brother of St. Peter and was the first bishop of the Church of Byzantium.

Francis also held a private session with Metropolitan Hilarion, the foreign minister of the Russian Orthodox Church, the largest in the Orthodox world.

It won’t happen tomorrow, of course, but could Pope Francis be the Pope that brings the Roman Catholics and the Orthodox back together?

And of course a one world religion will not appear overnight either.  There are far too many differences to overcome right now.

But as the world becomes increasingly unstable, people are going to be looking for answers.  After the world is ravaged by economic collapse, food shortages, nightmarish pandemics, unprecedented natural disasters and horrifying wars, will it finally be ready for a one world religion that promises “peace and friendship” among all of the religions of the globe?

This is something to watch for in the years ahead.  The global elite desperately want a single global religion, and they will keep moving things in that direction.

For now, Pope Francis just seems to be laying the groundwork for the one world religion that is coming.  There is a 900-year-old prophecy that indicates that Pope Francis could be the last Pope.  If that prophecy is true, then it will be very important to watch the actions of this Pope very carefully. 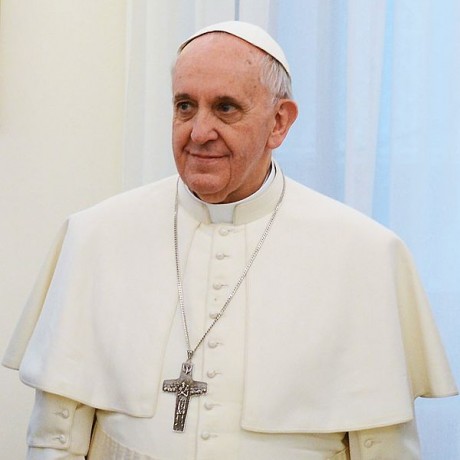