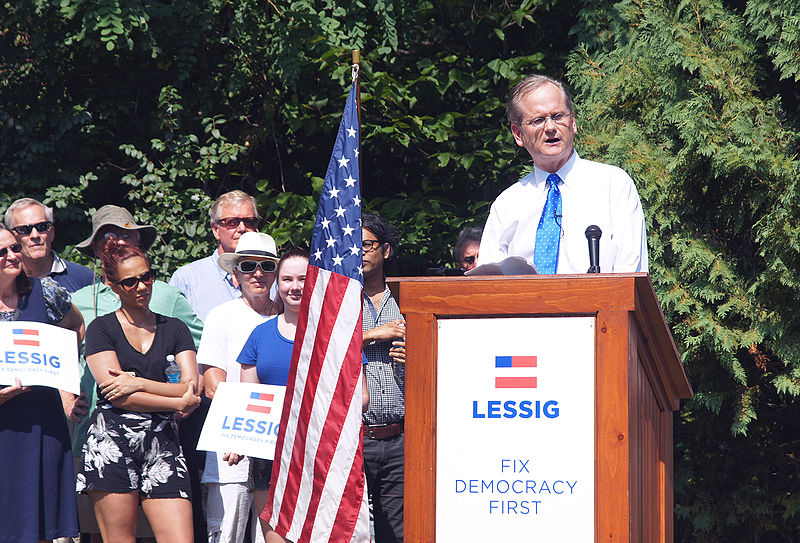 If what a Harvard University constitutional law professor is claiming is true, the plot to steal the Electoral College vote from Donald Trump is far more serious than most people thought. Larry Lessig briefly pursued the 2016 Democratic presidential nomination, but these days he is using his position as a Harvard law professor to try to stop Donald Trump. His new organization is called “Electors Trust”, and it has been acting as a central hub for the campaign to deny Trump the 270 votes that he needs to become the next president. If this effort is to be successful, anti-Trump forces need to flip 37 of Trump’s votes, and Lessig says that so far 20 Republican electors are considering voting against Trump. Of course there are many that are skeptical of his claims, but why would a Harvard constitutional law professor lie about something like this?

If Lessig is telling the truth, the Trump team should be deeply alarmed. It would be a grave mistake to simply assume that this Electoral College vote will be a formality, and we will find out on Monday what happens.

And without a doubt Lessig is in a position to know what is going on, because according to Politico his organization has been serving “as a clearinghouse for electors to privately communicate their intentions”…

Larry Lessig, a Harvard University constitutional law professor who made a brief run for the 2016 Democratic presidential nomination, claimed Tuesday that 20 Republican members of the Electoral College are considering voting against Donald Trump, a figure that would put anti-Trump activists more than halfway toward stalling Trump’s election.

Lessig’s anti-Trump group, “Electors Trust,” has been offering pro bono legal counsel to Republican presidential electors considering ditching Trump and has been acting as a clearinghouse for electors to privately communicate their intentions.

If they only had a handful of votes, I really doubt that Lessig would put his reputation on the line by going public like this. But now that they are more than halfway to their goal, he is probably hoping that a last minute publicity push will put them over the top. If the rest of the Republican electors are made aware that many Trump voters are already willing to flip, that may encourage others to join the cause…

“Obviously, whether an elector ultimately votes his or her conscience will depend in part upon whether there are enough doing the same. We now believe there are more than half the number needed to change the result seriously considering making that vote,” Lessig said.

Personally, I don’t think that it is going to work.

But I am alarmed enough about this effort that this is the third article that I have written about it this week alone.

On Wednesday, we also learned that U.S. officials are now claiming that Russian President Vladimir Putin was “personally involved” in the effort to interfere with the presidential election. The following was reported by NBC News…

Two senior officials with direct access to the information say new intelligence shows that Putin personally directed how hacked material from Democrats was leaked and otherwise used. The intelligence came from diplomatic sources and spies working for U.S. allies, the officials said.

Forty members of the Electoral College on Tuesday signed a letter demanding an intelligence briefing on Russian interference in the election ahead of their Dec. 19 vote.

Ten electors originally signed the letter when it was published Monday, and 30 more have since added their names.

Needless to say, there are many out there that are hoping to make as much as possible of this “Russian interference” angle in hopes that it will influence the votes of some electors.

To many on the left, it makes perfect sense to try to deny Trump the presidency even though he won the election fair and square. Here is a typical example of their reasoning…

Yet, at least outside of political fiction, there has probably never been a better election for electors to go against what their states’ voters wanted. Recent revelations by the Central Intelligence Agency that Russia actively engaged in this very close election to advantage Trump, and that Russia maintains leverage over him with unreleased information, call into question the legitimacy of a Trump presidency. Add to that Trump’s erratic and destructive behavior over the past month, the fact that nearly three million more voters preferred his opponent to him, his work to undermine relations with China, the fact that he considers his own uninformed opinions about international security superior to the evaluations of the nation’s intelligence agencies, and the near certainty that he’d be in violation of the Constitution’s emoluments clause on the day he is sworn in, and you really don’t get a more appropriate opportunity for Republican electors to rethink their states’ choice.

To those that supported Trump this is utter lunacy, but this is actually what many on the left are thinking.

Fortunately, at this point it appears that they are going to come up short. Even though Lessig claims that 20 Republican electors are considering abandoning Trump, the vast majority are solidly behind him…

Virtually all Republican electors reached by The Hill said they will vote enthusiastically for Trump.

“I’m voting how the people of Florida have told me to vote,” said Brian Ballard, a Florida elector who raised money for Jeb Bush and Marco Rubio during the GOP primary. “I don’t know anyone who isn’t. I appreciate people using First Amendment rights to reach out and try to convince me otherwise, but I’m obligated to support Trump because he won Florida.

“Also, I love the guy and want him to be president.”

So hopefully the vote next Monday will go as planned.

There hasn’t been more than a single “faithless elector” in any presidential election since 1832, and even though it is likely that we will see some this time, it would take something extraordinary for the anti-Trump forces to come up with the 37 votes that they need to push Trump under 270 votes and throw the election into the House of Representatives.

I don’t believe that they will be successful, but we have already seen during this election season that we should expect the unexpected.