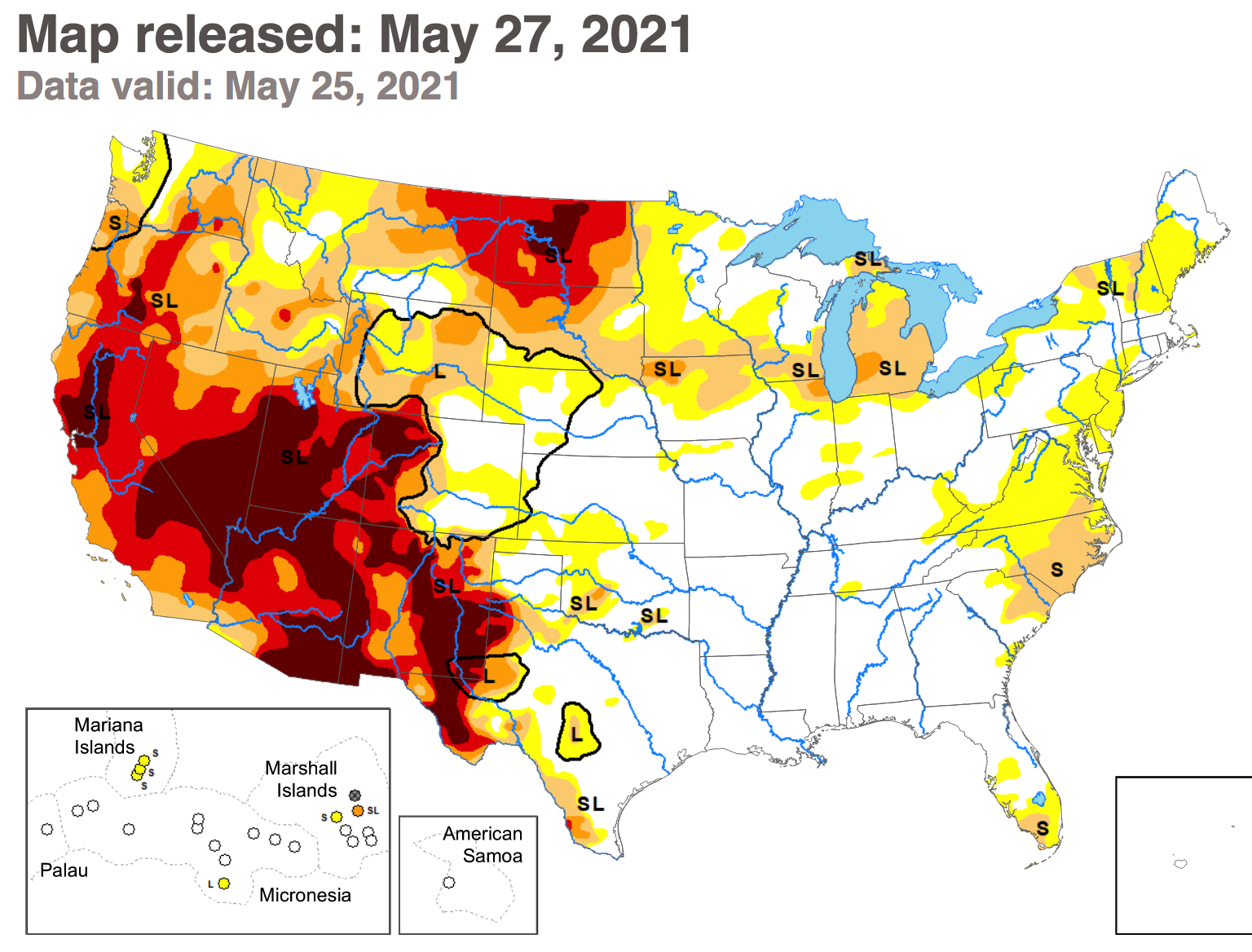 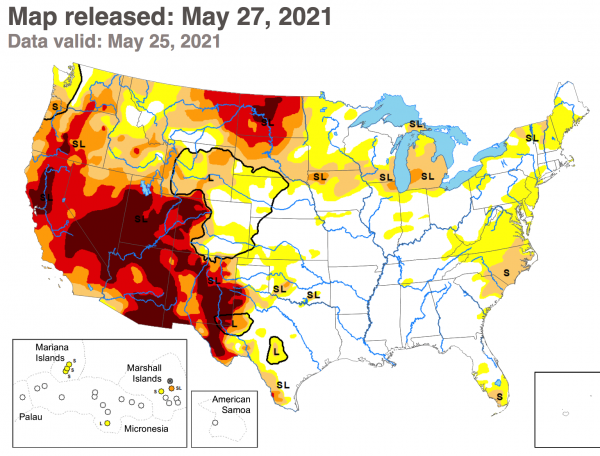 What is happening in California right now is going to affect every man, woman and child in the entire country.  Today, California has 24.6 million acres of farmland, and the state produces more of our fruits and vegetables than anyone else by a very wide margin.  So if agricultural production is dramatically reduced because of the endless megadrought that currently has the state in a death grip, that is going to be a major problem for all of us.  If you visit the official U.S. Drought Monitor website, you will see that nearly all of California is experiencing either “extreme drought” or “exceptional drought” right now.  Things have been so hot and so dry for so long that Governor Gavin Newsom has decided to declare a “drought emergency” in more than two-thirds of the counties in the state…

The state is facing yet another hot, dry summer ahead, and the governor has declared a drought emergency in 41 of the state’s 58 counties. More than 37 million Californians reside in these drought areas, according to the US drought monitor.

“This is without precedent,” Newsom said at a news conference announcing the first two declarations in April, speaking from the bed of Lake Mendocino that had been reduced to arid, cracked clay. Not long ago, he would have been standing under 40ft of water. “Oftentimes we overstate the word historic, but this is indeed an historic moment.”

Newsom is not exactly known to be a straight shooter, but in this rare instance he is telling it like it is.

This isn’t just a crisis.  This is a major crisis of epic proportions that isn’t going away any time soon.

Without enough water to function normally, many California farmers have already been faced with some absolutely heartbreaking decisions.  For example, farmer Joe Del Bosque said that it was a “sad day” when he recently had to destroy 100 acres of organic asparagus…

“It’s a really sad day,” Fresno County’s Joe Del Bosque told the Bay Area News Group, after destroying 100 acres of organic asparagus to divert precious water to more valuable melons. “The water is so uncertain this year. We didn’t think we’d have enough to carry it through.”

Del Bosque hasn’t given up on this year completely yet.  He is still hoping to salvage a melon crop, but he openly admits that he is taking a “big risk” by planting anything at all…

“We’re taking a big risk in planting crops and hoping the water gets here in time,” said Del Bosque, 72.

So what happens if the water never arrives?

For Del Bosque and countless other California farmers that have decided to risk planting crops, a potentially historic crop catastrophe could be looming.

In Fresno County, another farmer named Daniel Hartwig isn’t taking any chances.  He has pulled out nearly 400 acres of prime-production almond trees because there simply will not be enough water in the system to irrigate them…

“We’re removing 15-year-old, prime-production almond trees,” said Daniel Hartwig of Woolf Farming in Fresno County. “We’re pulling out almost 400 acres, simply because there’s not enough water in the system to irrigate them, and long term, we have no confidence that there would be water in the future.”

Woolf Farming buys water from the Westlands Water District, a contractor of the federal Central Valley Project. Two consecutive dry winters, combined with environmental requirements on the CVP, led the U.S. Bureau of Reclamation to allocate only 5% water supplies to Westlands and other contractors in February—and then to suspend even that amount a few weeks later.

Needless to say, the price of almonds is going to go up.

Without a doubt, this is a crisis that is truly national in scope.

Over in Butte County, water levels in Lake Oroville have dropped dangerously low.  The lake provides drinking water for 25 million California residents, but at this point the water is so low that houseboat owners are facing a mandatory removal order…

Houseboats are being hauled out by the dozen as drought conditions are forcing big boat owners on Lake Oroville out of the water.

Houseboat owners told CBS13 they got letters saying their boats would be removed no matter what. The lake is down to one of the last launch ramps at Bidwell Canyon Marina. Boaters are forced to descend lower and lower to keep up with water levels.

Any houseboat owner that did not willingly haul their boat away is being forced by the state to rent space in a nearby parking lot.

And those houseboat owners may not be able to return to the lake any time soon, because water levels are expected to be significantly lower by October…

One boat owner said they were given the choice of either hauling their own boats away or paying the state to rent the parking lot.

Many were seen standing on the lake’s basin which would have been completely underwater just months ago.

Forecasts indicate that by October, the reservoir, which provides drinking water to more than 25 million people, will see its lowest water levels for four decades.

The drought just continues to get worse and worse.

All over the state, you can find “receding reservoirs with bathtub rings of newly exposed earth” and “crops withering in the fields” as Dust Bowl conditions spread.

Without any hope that things will turn around any time soon, the California Department of Water Resources is warning that severe water restrictions may be instituted soon.

Of course California is far from alone.  As you can see from the latest U.S. Drought Monitor map, this megadrought has gripped much of the western half of the country.

Rivers and lakes are drying up, millions and millions of acres of agricultural production are at risk, and the dust storms are starting to get so large that you can literally see them from space.

For years, I have been warning that Dust Bowl conditions would return, and now it has happened.

This drought is one of the biggest news stories of the year so far in 2021, and we all need to monitor future developments very carefully.

Because food prices have already been rising at a very frightening pace, and this megadrought threatens to send them soaring even higher.