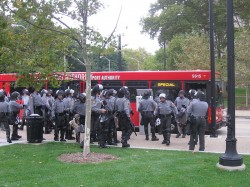 In the United States today, young children are taught from the moment that they first enter school that they are to blindly follow orders.  By the time most Americans have become adults, if they are told that something “is policy” then they just accept it.  Decades of conditioning have trained us to do what we are told no matter what the consequences are.  But what happens when “policy” asks us to do the unthinkable?  All over America, “it’s policy” has become an excuse for absolutely unspeakable acts.  Fire crews are standing by and watching homes burn to the ground and rescue crews are standing by and watching people drown all in the name of policy.  Because it is “policy”, every single day in airports all over the nation TSA “officials” are sexually touching Americans and Americans are allowing them to do it.  Things have gotten completely and totally out of control.  Hitler and Stalin and Chairman Mao were able to do the things that they did because their people blindly adhered to their “policies”.  In the United States today, is there anything that the American people would not do if they were told that it was “policy” to do it?

This country is starting to get really crazy.  Just consider the following three examples where “it’s policy” was used as an excuse for absolutely horrifying behavior….

#1 In the San Francisco area recently, fire crews and police stood on the shore and just watched as a 50 year old man slowly drowned in the San Francisco Bay.  In the old days, Americans were never concerned with what “the policy” was in a situation like that.  If someone was drowning people that could swim would jump in and rescue them.  But today all of that has changed.  The following is how an article posted on MSNBC described the incident with the drowning man….

Fire crews and police could only watch after a man waded into San Francisco Bay, stood up to his neck and waited. They wanted to do something, but a policy tied to earlier budget cuts strictly forbade them from trying to save the 50-year-old, officials said.

In addition to the “first responders”,  approximately 75 other people watched this man slowly drown.

#2 Even more frightening is an incident that happened down in Tennessee.  A team of firefighters actually stood by and watched a house burn to the ground because the homeowner had not paid his fees.  The following is an excerpt from a report by a local NBC affiliate about this incident….

Imagine your home catches fire but the local fire department won’t respond, then watches it burn. That’s exactly what happened to a local family tonight.

A local neighborhood is furious after firefighters watched as an Obion County, Tennessee, home burned to the ground.

The homeowner, Gene Cranick, said he offered to pay whatever it would take for firefighters to put out the flames, but was told it was too late.  They wouldn’t do anything to stop his house from burning.

Reportedly, the house took hours to burn to the ground.  Once the fire spread to the neighboring house, then the local fire department sprang into action.

Could you do that?

Could you just let a house cold-heartedly burn to the ground?

#3 In the United States today, if you want to get on an airplane you must subject yourself to some of the most bizarre security measures imaginable.

One of the procedures that some air travelers are subjected to is known as an “enhanced pat-down”.  These enhanced pat-downs involve sexual touching that would be illegal if it was done out on the street.  But because it is “policy”, TSA officials do it and the American people let them do it.

What some travelers have had to endure in recent months is absolutely horrifying.  For example, back in June a 95 year old woman with cancer was forced to remove her adult diaper as part of the “enhanced pat-down” procedure.

In what kind of a world does that make sense?

We are losing all sense of what it means to be “Americans”.

If you object to having yourself or your children touched by TSA “officials”, then you will be arrested and dragged off by police.  In fact, that is exactly what happened at Nashville International Airport last Saturday.  A 41 year old woman declared that she did not want her young daughter “touched inappropriately” by TSA agents and so authorities swooped in and came down on her hard.

You see, in America these days we are all just expected to “go along” with whatever the authorities want to do to us.

I made the same point recently when I wrote about the “smart meters” that are going in all over the United States.  These smart meters are highly invasive pieces of surveillance equipment, and utility companies in many areas of the country are telling customers that if they don’t take them they will no longer receive any service.

Bullying has become standard operating procedure in the United States.

Many of you that are reading this will not remember, but there was a time when police (and most public officials) in the United States were actually pretty friendly and pretty helpful.

But that was decades ago.  Now there has been a complete and total cultural shift.  Today they are all taught to act tough.  They are instructed that it is their job to give orders and to be “authoritative” and that they should expect immediate and total obedience no matter what.

We are becoming the kind of totalitarian “Big Brother” police state that we always accused communist countries like the Soviet Union of being.  Every single day, somewhere in America there are control freak bureaucrats that are putting in more “policies” that are taking away more of our freedoms.

This is going to continue until there is a major cultural shift in this country.

Hopefully at some point there will be a major shift back in the direction of liberty and freedom.

Hopefully at some point the American people will wake up and demand change.

So what do you think?  Do you think that there is a chance of that happening?