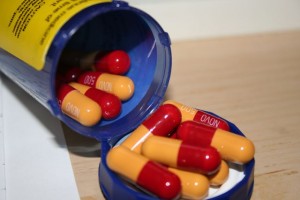 Anyone that comes to visit America may notice that most of us walk around like a bunch of zombies.  Well, the truth is that this is because about half of us are completely doped up on prescription drugs.  In America, we don’t just take pills if we are sick.  In this day and age, the pharmaceutical companies have come up with a pill for just about everything.  If we are feeling a little sad, we are told to just pop a pill.  If we are feeling a little bit of pain, we are told to just pop a pill.  If our children like to run around and play, we are told that giving them the right pills will settle them down.  Every single year, prescription drug use in America increases, and there are dozens of different pharmaceutical companies that are making billions of dollars off of our “legal” addiction to drugs.  The funny thing is that many of these “legal” drugs are only just the slightest bit different from many of the “illegal” drugs that are being sold out on the streets.  But because they have “government approval”, the big pharmaceutical companies can relentlessly peddle them to the American public.  Many of these drugs are very damaging to our health, many of them are very damaging to our ability to think and many of them are extremely addictive.

The following are 18 crazy facts which show that no nation on earth is more doped up on prescription drugs than America is….

#4 According to the Wall Street Journal, more than 25 percent of all kids and teens in the United States take prescription drugs on a regular basis.

#6 A recent Government Accountability Office report shockingly discovered that approximately one-third of all foster children in the United States are on at least one psychiatric drug.

In fact, the report found that many states seem to be doping up foster children as a matter of course.  Just check out these stunning statistics….

But of course prescription drugs are only part of the reason why most of us in America walk around like a bunch of zombies.

Sadly, many of us are addicted to other kinds of drugs as well….

*The United States has the highest rate of illegal drug use on the entire planet.

*According to a recent Gallup poll, alcohol consumption in the United States has hit a 25 year high.

*In this country, many of us are also highly addicted to entertainment.  In fact, the United States is tied with the U.K. for the most hours of television watched per person each week.

So if it seems like many of us in America can’t think real clearly, now you know why.

A song by Chris Rene that was been viewed more than 9 million times on YouTube asks this question….

“Hey, young homie what you trippin’ on?”

Well, it turns out that almost everyone in America is “trippin” on something.

We have become a nation of addicts.

Instead of stepping up and dealing with life, many of us would rather just “check out” and find something that will make us “feel better” right away.

The saddest thing of all is what we are doing to our children.  We are raising an entire generation that just thinks that it is “normal” to be doped up on prescription drugs.

Yes, a lot of people are becoming very wealthy by peddling all of this junk, but at what cost?

As noted earlier, every single year prescription drug use in America increases.  At what point will we become so doped up that we won’t even be able to function properly as a nation any longer?