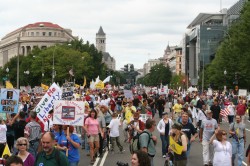 Not that the American people have a clear idea of what they actually want.  The truth is that the citizens of the United States are deeply, deeply divided on a whole host of issues.  But the one thing that American voters can agree on is that they are hopping mad.

The following are 12 recent polls that prove that the American people are really, really pissed off as election day approaches….

#1 According to a recent USA Today/Gallup poll, only about one in four Americans is satisfied with the way that the country is being governed.

#2 The latest ABC News/Yahoo poll found that faith in the U.S. system of government is at a 36 year low.

#3 The newest New York Times/CBS News survey discovered that about 60 percent of American voters believe that their own members of Congress do not deserve to be re-elected.

#5 A Bloomberg National Poll conducted a couple of weeks ago found that more than 40 percent of likely voters who once considered themselves to be Obama supporters are now either less supportive of Obama or do not support him at all at this point.

#6 An absolutely stunning Gallup poll released last month revealed that a whopping 58 percent of the American people believe that a third political party is needed because the Republicans and the Democrats are doing such a bad job of representing the American people.

#7 A new study by The Washington Post, the Henry J. Kaiser Family Foundation and Harvard University discovered that more than 40 percent of the American people would give the government either a D or an F.

#8 CNBC recently conducted a survey which found that 92 percent of Americans rate the U.S. economy as either “fair” or “poor”.

#10 A Politico/George Washington University Battleground Poll released late last month found that 63 percent of the American people believe that the nation is on the wrong track.

#11 A recent Gallup poll discovered that 46% of Americans believe that the U.S. federal government “poses an immediate threat to the rights and freedoms of ordinary citizens.”

#12 A Rasmussen Reports national telephone survey that was just completed found that 65% of likely U.S. voters say that if they had the option, they would vote out every member of Congress and start all over.

So will all of this anger result in major change happening in Washington D.C. after the election?

There are 435 seats in the U.S. House of Representatives.  At the very most, about 100 of those seats are actually “in play” – meaning that they have a chance to change hands.

So that means that we are going to see at least 335 of the exact same faces when the U.S. House of Representatives begins a new session.

Over the past five elections, incumbents have been re-elected to the U.S. House of Representatives at an average rate of 96 percent.

Wouldn’t you like to have a 96 percent chance of winning?

Sure, in 2010 things will be a little different, but we will still likely see incumbents winning at least 80 percent of their matchups.