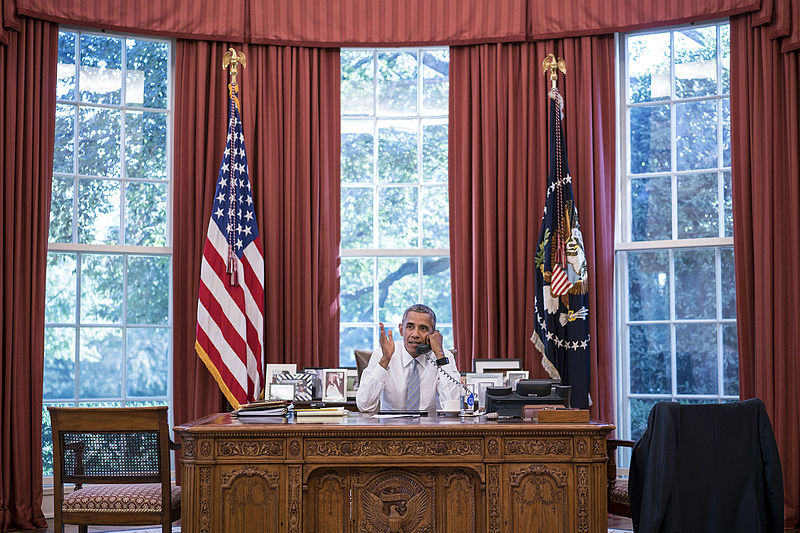 Is Barack Obama trying to start a war, and will that war be used as an excuse to stay in office once his term is over?  Late in his second term, Obama is starting to become extremely aggressive with the rest of the world.  He just angered China by sailing an aircraft carrier task force past disputed islands in the South China Sea, he is provoking North Korea by simulating an invasion of that nation during a military exercise that is going to involve more than 300,000 troops, and he is backing Saudi Arabia and Turkey as they make moves that could very well start World War III in the Middle East.  If a war did begin, that could give Obama the excuse that he needs to exercise his emergency powers, and that could potentially include suspending the election that is scheduled for November.

I know that all of this sounds a little bizarre, but it would help to explain Obama’s extremely aggressive behavior lately.

For example, why is the U.S. military risking a major incident on the Korean peninsula?

North Korean leader Kim Jong-Un is about as paranoid as they come, and he is extremely alarmed by the massive military exercise that is about to begin in South Korea.  More than 300,000 troops are gathering for what is being billed as the biggest military exercise in the history of that nation.

In response to these “exercises”, Kim Jong Un has placed his nuclear weapons on standby for “use at any moment”, and he is warning that North Korea may launch a “preemptive and offensive nuclear strike”…

North Korea warned it would make a “preemptive and offensive nuclear strike” in response to joint U.S.-South Korean military exercises that began Monday.

The news was announced in a statement by the National Defense Commission of North Korea and published in the state-run Korean Central News Agency.

“As the joint military exercises to be staged by the enemies are regarded as the most undisguised nuclear war drills aimed to infringe upon the sovereignty of the DPRK, its military counteraction will be more preemptive and offensive nuclear strike to cope with them,” the statement read.

I don’t care how crazy someone is – if they have nuclear weapons and they threaten to hit the United States with a preemptive nuclear strike, I am going to get alarmed.

The North Koreans absolutely hate us.  In fact, hatred for the United States is one of the pillars of their society.  I know that may sound strange to many Americans, but it is true.  If you can believe it, each year they actually have an entire month during which hatred for America is celebrated.

Tensions on the Korean peninsula are running extremely high, and a single hydrogen bomb could potentially kill millions of people.

So why risk an incident?

Meanwhile, the Obama administration has been provoking China in the South China Sea.

Yes, it is a problem that China has seized control of several important islands in the Spratly and Paracel island chains.  But there are other ways to handle this crisis rather than trying to show how tough you are.

Last month, China deployed surface-to-air missile systems on the disputed islands.  Obama’s response was to sail an aircraft carrier task force past the islands to see if China would start shooting at it.  The following comes from an article about this incident that was posted by the Navy Times…

The U.S. Navy has dispatched a small armada to the South China Sea.

The carrier John C. Stennis, two destroyers, two cruisers and the 7th Fleet flagship have sailed into the disputed waters in recent days, according to military officials. The carrier strike group is the latest show of force in the tense region, with the U.S. asserting that China is militarizing the region to guard its excessive territorial claims.

Stennis is joined in the region by the cruisers Antietam and Mobile Bay, and the destroyers Chung-Hoon and Stockdale. The command ship Blue Ridge, the floating headquarters of the Japan-based 7th Fleet, is also in the area, en route to a port visit in the Philippines. Stennis deployed from Washington state on Jan. 15.

Do we really want to go to war with China over these islands?

The first time we sailed a military vessel through those waters after China had claimed those islands, a Chinese state-run newspaper boldly declared that China “is not frightened to fight a war with the U.S. in the region“.

Most Americans don’t realize this, but our relationship with China is rapidly going downhill.  There is more to this than just the South China Sea, but without a doubt this is a major point of contention as far as the Chinese government is concerned.

At the same time, we keep getting closer to World War III erupting in the Middle East.  Last month, defense ministers from 49 different nations met in Brussels to discuss a ground invasion of Syria, and since that time forces have been massing in northern Saudi Arabia and southern Turkey.

If a ground invasion of Syria does take place, the goal would be to go to Damascus and take down the Assad regime.  That would put “coalition forces” in direct conflict with Iran, Hezbollah and most importantly the Russians.  It could very easily be the spark that sets off World War III, but Saudi Arabia, Turkey and their allies will never go ahead without the direct approval of the Obama administration.

Barack Obama does not need all of these flashpoints to erupt in order to evoke his emergency powers.

He just needs one of them.

Throughout American history, presidents have always had emergency powers, but since 9/11 these powers have been greatly enhanced.  Given the right circumstances, a U.S. president could now essentially declare himself (or herself) a dictator for the duration of the crisis.

Of course the word “dictator” would never actually be used, but that would be the reality of the situation.

And if we had a “national emergency” that was bad enough, Barack Obama would have the authority to postpone or suspend the upcoming election.