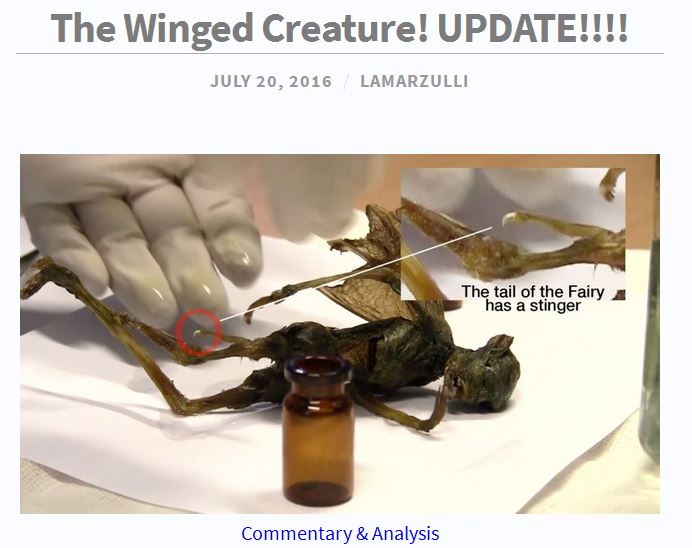 I wasn’t going to write about this.  I was trained as an attorney and I am skeptical by nature, and so I generally don’t like to write about things that I can’t prove.  But in the case of this bizarre winged creature, a couple of factors changed my mind.  First of all, we actually have physical evidence which has been scientifically tested.  When it comes to things like this, people are always crying out for some real physical evidence, and now we have some.  Of course the existence of evidence does not mean that we can necessarily find answers to all of our questions, but at least we have something to work with.  Secondly, a highly respected researcher named L.A. Marzulli has spent a great deal of time extensively investigating this case.  I have personally interacted with L.A. Marzulli, and I have followed his work for years, and so I know how credible he is.

Earlier today, I visited L.A. Marzulli’s blog, and I was astounded by what I saw.  There in living color was a bizarre winged creature that doesn’t bear any resemblance to any animal that science currently knows about.  You can view it for yourself on his blog right here.

L.A. Marzulli did not personally discover this creature.  Rather, it was originally discovered on the side of a highway by a 13-year-old Mexican boy who didn’t know what it was.  He ultimately turned it over to a well known Mexican investigative journalist named Jaime Maussan.  Since that time this creature has been x-rayed, and the x-rays enabled researchers to see that the creature possessed a full skeletal structure.  The x-rays even showed that the creature’s left leg had been broken at one point.  In addition, DNA testing was done, and the DNA did not match any known animal.

This amazing discovery is featured in L.A.’s new documentary entitled “Watchers 10“, and a 9 minute clip featuring analysis of this creature has been posted to YouTube right here…

So the big question that we need to ask is this…

What in the world is that thing?

At this point, there appear to be three main theories.

Many people are calling this winged creature a fairy.  These days a lot of people out there believe in “fairies”, and YouTube is loaded with footage that people have supposedly captured of “fairies” flying around outside at high speed.  Videos are very easily doctored, and the hard evidence that these “fairies” exist has always seemed to be lacking.  And this winged creature doesn’t appear to fit the bill anyway.  This winged creature is certainly small, and it certainly does have wings, but it doesn’t really fit the description of what you might expect a “fairy” to look like.  Instead, it looks quite gruesome and evil.  It has pointy ears like a gargoyle, and the body of the creature looks to me like it resembles an insect more than a person.

Secondly, some people are calling this winged creature an “alien”.  But of course that label is almost instantly applied to any strange creature that pops up these days.

Of course it is always possible that this creature could be another type of “alien” or demonic entity.  But I don’t know we could conclusively prove that.

Thirdly, L.A. Marzulli and others have pointed out that this winged creature that was discovered in Mexico does seem to have some similarities to the “locusts” that are described in Revelation chapter 9.  The following is what Revelation 9:7-11 says in the Modern English Version…

7 The shape of the locusts was like horses prepared for battle. On their heads were something like crowns of gold, and their faces were like faces of men. 8 They had hair like the hair of women, and their teeth were like the teeth of lions. 9 They had breastplates like breastplates of iron, and the sound of their wings was like the sound of chariots with many horses running to battle. 10 They had tails like scorpions and stings in their tails. Their power was to hurt men for five months. 11 They had as king over them the angel of the bottomless pit, whose name in Hebrew is Abaddon, and in Greek his name is Apollyon.

Does this creature have a face like a man?

I think that you could say that.

I don’t see any hair, but it is always possible that it could have had hair at one time.  I do see some frightening looking teeth, and it definitely has very prominent wings.

The detail that is most intriguing though is the stinger at the end of the tail.  On Marzulli’s website, you can see a closeup of the tail and the stinger.  Obviously the stinger has a function, and at this point we can only speculate because we don’t know enough about the creature.

Ultimately, there is always the possibility that this could be some sort of an elaborate hoax, but the scientific examinations that have been done so far have cast doubt on that explanation.  But I am certainly not willing to totally rule that out at this point either.

In the end, I don’t know what that creature is.

I was highly intrigued when I saw it, and after thinking about it I decided to share this bit of news with all of you.

I would encourage you to look into this for yourself and come to your own conclusions.

If we are indeed living in the last days as described in the Bible, then our world is going to get very, very weird in the years ahead.  The Book of Revelation describes all sorts of bizarre creatures and strange events, and the more I read it the more I am convinced that the period just before Jesus comes back is going to look a whole lot more like an extremely wild science fiction movie than most people would dare to imagine.

So yes, a strange winged creature that looks like something from another world may be hard to swallow, but this might just be the tip of the iceberg.

By the time it is all said and done, we could very well see things in the years ahead that will completely blow all of our minds.