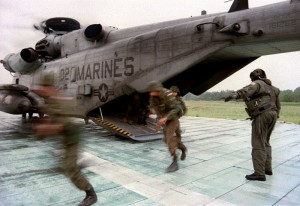 A recent Daily Mail article detailed many of the strange research projects that DARPA is working on right now.  The fact that DARPA has actually allowed these projects to be revealed in the mainstream media probably means that the development stage is nearly over and they are ready to try to convince a wary public to accept them….

Tomorrow’s soldiers could be able to run at Olympic speeds and will be able to go for days without food or sleep, if new research into gene manipulation is successful.

According to the U.S. Army’s plans for the future, their soldiers will be able to carry huge weights, live off their fat stores for extended periods and even regrow limbs blown apart by bombs.

The plans were revealed by novelist Simon Conway, who was granted behind-the-scenes access to the Pentagon’s high-tech Defence Advanced Research Projects Agency.

So how is this possible?

How would you genetically modify a human to be able to have these abilities?

When you really stop and think about this kind of technology, the implications are staggering.

Could viruses be used to genetically modify humanity on a large scale?

How would the rest of humanity respond to a “super race” of mutants that are clearly “superior” to the rest of us in a bunch of different ways?

When you start messing with creation, it opens up Pandora’s Box.

The possibilities are endless, but so are the potential problems.

Just because we can do something does not mean that we should.  There may be consequences decades down the road that we cannot even conceive of right now.

Other “super soldier” research projects that DARPA is working on at the moment involve advanced technology and robotics rather than genetic modification.

For example, DARPA is developing helmets that would allow our soldiers to communicate telepathically….

More recently, DARPA’s Silent Talk programme has been exploring mind-reading technology with devices that can pick up the electrical signals inside soldiers’ brains and send them over the internet.

With these implants, entire armies will be able to talk without radios. Orders will leap instantly into soldiers’ heads and commanders’ wishes will become the wishes of their men.

I don’t know about you, but I would not want anyone reading my thoughts or beaming orders directly into my brain.

DARPA is also working on “exoskeletons” that will enable soldiers to lift incredible weights without tiring and perform other physical tasks that normal soldiers simply could not do.

You can see video of this kind of exoskeleton being demonstrated right here.

DARPA is also hoping to one day implant microchips into our soldiers that will constantly monitor the health and physical condition of our boys and girls in the field.

For many, these new technologies are very exciting.

For others, they cross the line.

Merging men with machines or messing with the very fabric of life is the kind of thing that science fiction movies are made of.

Unfortunately, if we make a very serious mistake we just can’t get up and turn off the movie.  Any mistakes that we make could stay with us indefinitely.

But at this point it looks like there is very little standing in the way of these kinds of technology becoming mainstream.  Tests on rats have already shown what is possible….

In 2005, Ronald Evans, a hormone expert working at the Salk Institute of Biological Studies in La Jolla, California, showed how genetic modification can increase the athletic power of mice.

Evans produced a group of genetically modified mice with an increased amount of slow-twitch muscle fibre. This type of fibre is associated with strong cardiovascular muscles and boosts an athlete’s endurance.

Evans’s mice could run for an hour longer than normal mice, were resistant to weight gain no matter what they were fed on, and remained at peak fitness even when they took no exercise.

How much do you think people would pay to be able to remain at peak fitness without doing any exercise at all?

When the general public realizes what is possible there will be an overwhelming demand for these technologies.

So just how far can all of this go?

Well, futurist Ray Kurzeil believes that we are only about 20 years away from actually achieving immortality….

Ray Kurzweil, a world-renowned scientist and author of The Singularity is Near, thinks the world as we know it will be unrecognizable in 20 years.

One of the changes he thinks are possible: Scientists may finally crack immortality.

“I and many other scientists now believe that in around 20 years we will have the means to reprogramme our bodies’ stone-age software so we can halt, then reverse, aging,” he writes in The Sun. “Then nanotechnology will let us live for ever. Ultimately, nanobots will replace blood cells and do their work thousands of times more effectively.”

I wouldn’t count on the human body being able to live forever.

But without a doubt we are going to see a whole lot of humans attempting to “merge with technology” and  “reprogram themselves” through genetic modification in future years.

According to a Boeing press release, the researchers and engineers conducted the test flights in Oregon in June using two ScanEagle drones which performed like a “swarm of insects.”

The flight operator was able to connect with the autonomous drones using only a laptop and a military radio. Boeing engineers said the drones were able to complete tasks more efficiently by communicating with each other.

“This swarm technology may one day enable warfighters in battle to request and receive time-critical intelligence, surveillance and reconnaissance information directly from airborne (unmanned aerial vehicles) much sooner than they can from ground control stations today,” Gabriel Santander, program director of Advanced Autonomous Networks for Boeing Phantom Works, said in the press release.

Technology is advancing at such a rapid pace that it is really hard to keep track of it all.

But where is it taking us?

Recently I wrote about the nightmarish high tech Big Brother surveillance grid that is going up all around us.

Our lives are becoming completely dominated by technology, and that is a very dangerous thing.

We like to think that all of these new technologies will always be used for good and will never fall into the hands of tyrannical madmen, but history tells us that liberty and freedom are very rare phenomenons.

Throughout most of human history, most people have lived under some form of tyranny.  And today liberty and freedom are already rapidly disappearing all over the globe.

Technology has progressed to the point where it would definitely be possible for a “scientific dictatorship” to completely and totally dominate humanity unlike anything we have ever seen before.

So we should be very careful about what we create. 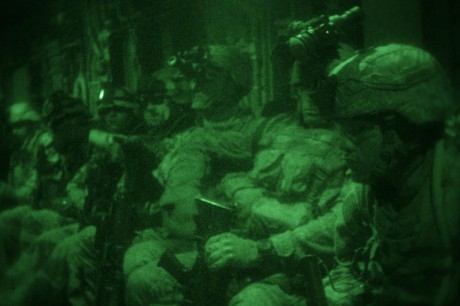